I found this great idea on Carver's blog. Please go look at her photos, they are lovely!


My photos were taken on Saturday. We took a drive up North over the Black Isle, over the Cromarty Firth and along the East coast to the village of
Shandwick. This is the view across the Moray Firth looking South East. It was a clear day, but the wind was COLD. 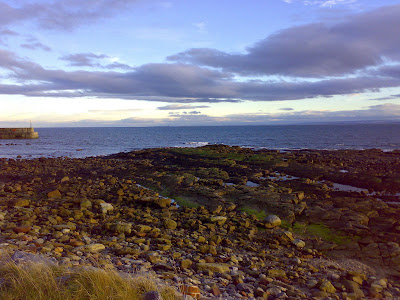 This next photo was leaving Shandwick, it was about 3:30 and starting to get a but twilight-ish, but I figured I'd try taking a photo anyway. I loved the way those trees stood out in the field. 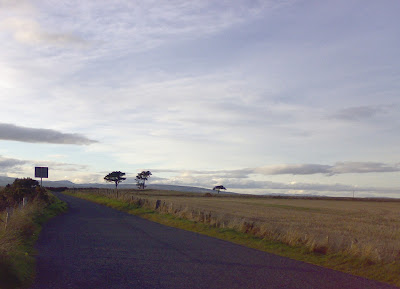 This next one is the Shandwick stone of the graves. It's a Pictish standing stone from about the 8th or 9th century. It stands 10 foot (3m) tall and it enclosed now in a protective glass box. The box made taking photographs of the beautiful Pictish carvings very frustrating, but did make for some nice reflections of the clouds and sky. If you want a better idea of the actual carving designs you can find them here.

The Picts were a unique people who colonised the North-East of Scotland. It was once believed that they painted themselves blue, but more recent research proves it much more likely that they were covered in blue tattoos. The designs they carved onto their stones were probably similar to those they used for their tattoos. I was interested to see on TV recently that the Picts stayed Pagan long after the Western Gaels converted to Christianity. This stone as a cross on one side, so it was carved by Christian Picts, but many of their stones are of wonderfully decorative animals. 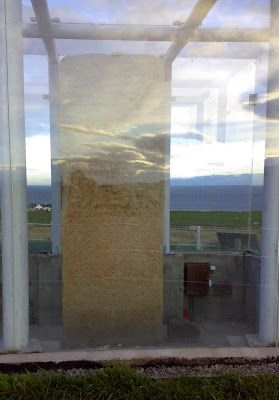 The view from the stone. Somewhere across that water is where we live. :-) 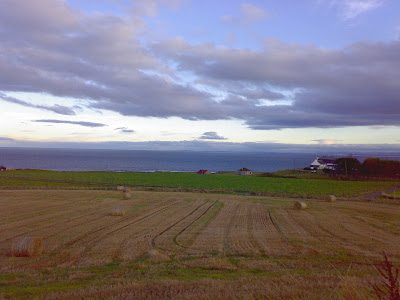 WOW, GREAT PICS!!! For some seconds when I saw the first pic, I thought I saw the clouds moving and that spooked me HE HE HE HE...

Yeah, it IS HARD to take pics of anything inside a glass box or aquariummmm...uggghhh...

But anyway, it seems you live in a beautiful, serene place...mmmm...

Those are beautiful shots. You live in such a gorgeous part of the world. Truly lovely images.

Beautiful. I truly enjoy seeing the sights of places that are so different from where I live. Thank you.

I could have sworn that I posted a comment on your last post with the cute little bird, but I don't see it there. I wanted to tell you that I have tagged you. If I was skilled enough to embed the link here, I would, but I always seem to mess those things up. So in order to find it, go to my place and scroll down to the post titled, "Blogging Album Project".

Those are very striking photos you've got there; lovely, in fact. You do, indeed, live in a picturesque part of the world. Neat-o!

Yes, lovely scenery and skies. You do live in a beautiful place!

They're beautiful,really...
And Michelle i've just got ur mail about your ancestor lived in Istanbul and i'm very glad to hear that!!!

And i loved ur post that u dedicated for Evie and Minna...(Minna sound like a name in Turkish as "Mine")

Love and Hugs from Istanbul

One day I want to go and see where my ancestors walked and lived. :-)