Sunday, 10th May, was the day Standing Women had their annual stand for a better world scheduled. Each year they ask that everyone participating stands:

"for five minutes of silence at 1 p.m. your local time on May 10, 2009, in your local park, school yard, gathering place, or any place you deem appropriate, to signify your agreement with the statement below. Please stand at a different hour with a different time zone if 1 p.m. is not your preferred time.We ask you to invite the men who you care about to join you."

Well, this year I had completely forgotten the date, but remembered just in time to make my stand... in a cemetery!

Here is where I stood on Sunday, at Tomnahurich cemetery in Inverness. 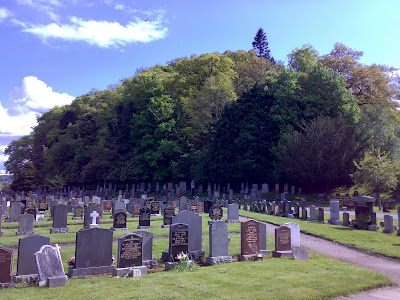 Tomnahurich is much more than just a cemetery and on Sunday the experience of being there turned out to be much more than I expected as well. Tomnahurich means "Hill of the Yews", but once, long long before there was a graveyard there, it was known as the "Hill of the Fae", a magical gateway between the worlds of mortals and magic.

The first time I ever set foot on Tomnahurich was when I came out on holiday to meet my future husband. That time I felt something really strange and amazing... and I've always wanted to go back. I've never had the chance, but this past Sunday hubby had to run an errand in Inverness and since it was a beautiful sunny day I suggested we go for a walk afterwards. I asked to go to the hill, since it's almost exactly seven years since I was last there. I like cemeteries. They're always peaceful, usually have lovely trees... 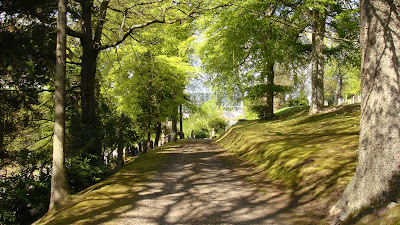 ...and in this case also stunning views of Inverness and the surrounding area from the top. 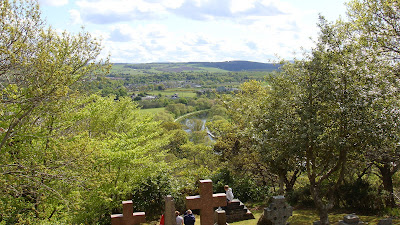 You see, Tomnahurich is shaped, as hubby puts it, a bit like an ocean liner. It's a long hill with a flat top. Here's the view from the top, first from one end and then the other... 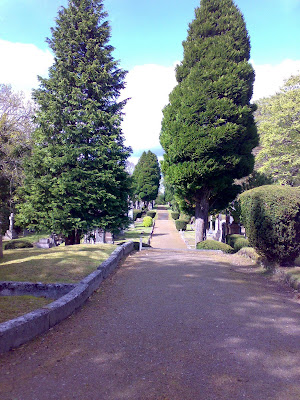 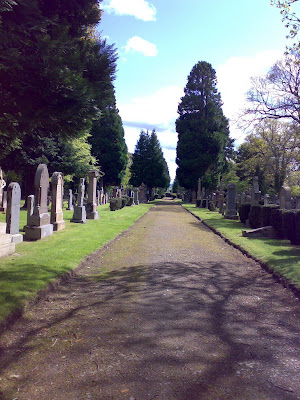 When I was here the first time, walking along that middle path, I stepped into the centre and felt as if I stepped through something I can only describe as "electric jelly." :-o The air wobbled and tingled. I tried stepping back through it again... but it was gone. Nothing.

So, this year on Standing Women's day I finally went back and stood with some very special "standing stones" on a double anniversary. You see, not only was I last there roughly seven years before, but my husband's father was buried there roughly thirty years ago in early May. Hubby went looking for the grave, while I stood, but couldn't find it. He remembered the area, but had a feeling the stone had been renewed by another family member and couldn't remember what the new stone looked like.

He was busy going up and down the rows and rows of graves when I saw something - a man in a white shirt standing by a grave in the distance. Long seeve shirt with the sleeves rolled up to just below his elbows, grey trousers... It was only a picture in my mind and I dismissed it as just that - my imagination, but the feeling of being pulled to that grave was so intense I gave up trying to stand and went across to where I'd "seen" the man. It was way over in another area of the graveyard, far away from where my husband was looking for his dad, but it was a nice day and I enjoyed the walk.

I came down the path... looked down at the grave where the man had been standing... and there was the name of my husband's father.

Two anniversaries, two people standing - one passed standing to be remembered and one present standing for the future. All in all I'd call that a pretty amazing day. 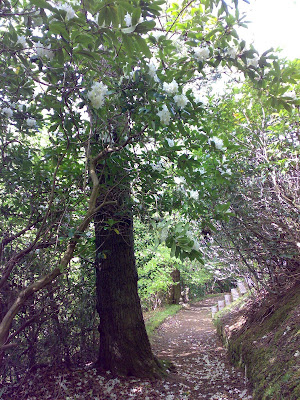 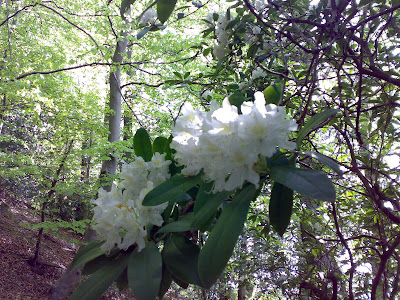 Wow, what an experience, Michelle! You really do have a gift. I'm so glad you wrote about this.

What an amazing day! You sent shudders up and down my spine...and gorgeous photos as well :)

when I came out on holiday to meet my future husband.....

Your story about the man in the white shirt and being drawn to the grave does cause me issues though, as do all similar happenings I ever have described.

The intersection of things I don't believe/can't explain/don't understand and the world I live in.

Very technical mind. like all dots to join. Dot's that don't are just a mystery I can't explain, thus the dilemma.

Really neat looking place. I definitely need to figure out how to spend some time touring Europe!

Hope all is well!

I also love walking thru Cemetary's especially older ones. Sadly, the cemetary nearby is used mostly as a place for dog's to run free and relieve themselves with little regard from their keepers. Sad.

Your pictures were gorgeous and everything looks so lucious and green. Somehow your Spirit made contact with your host guide who led you to what you were seeking. Good for you and your hubby that things went well.

BTW, I left you a message in regards to Jimmy Stewart.

That IS amazing! Your photos are wonderful and peaceful (even in a graveyard). What an inspirational day!

I have acknowledged the Mars Award on my blog today. Thank you so much!

I feel tenderly blessed reading this, twice so. Once, because I'm grateful for every peace-standing story and second, because you were open to the truth of your vision and shared it with us. Thank you.

Yes, amazing gift you have.
And the place is so peaceful and lovely!

Martha
Thank you for the kind words/reply.

Hi Rose
Nice seeing you back here. I must pop by your blogs and check out your lovely jewelry again. :-) The photos came out really nice, I must agree, but the place really is that beautiful.

PV
I used to double/triple check every odd thing that happened, used to keep a journal to try to find sensible alternative reasons. In the end I had no logical explanations and either let it go or drove myself crazy. I let it go... sometimes. LOL

Bogey
That's sad about the dog-do. There's a small cemetery in our area that's having a similar problem with seagulls. Being quiet the gulls have decided it's the perfect place to nest and now they're attacking mourners visiting graves and leaving gull-poo on everything. We haven't had any gull problems this year. Last year they nested near us in hoards on a flat roofed shed, but this year our crows kept chasing them. :-) I'm not a fan of the gulls here, they're a pest.

Hi Mimi
I'll be over to read ASAP.

Grace
Thank you for the most gracious (word play intended) reply. :-)

Hi Ting
It really is such a lovely area. I only wish I could capture the whole view from the hilltop.

Way cool, Michelle. I'm glad you shared that story. Made me smile. :)

Must have been a wonderful feeling.

It was a wonderful feeling. I was grinning like a Cheshire cat and thinking anyone watching me must have thought I'd lost it! I just felt such a wave of happy, love and joy... and wanted to cry. Typical female? lol

And yeah, I understand completely the Cheshire-cat grin and the wave of happy, love, and joy that you wanted to cry he he he...

All cemeteries should be so lovely, amazing.

How kind of the spirit to guide you to the grave you sought. Amazing day indeed!

And you certainly caught that jet beautifully in the first photo, even though I doubt you were trying. Funny how when you were TRYING to catch a jet so perfectly, you were finding it difficult!

I never even noticed the jet until you commented. How funny! Shows you what you don't notice in your own photos.

So Nice Sandy's father helped him, through you, to find his grave. So cool you would be their connection! He embraces you as "family", you know?