A Most Remarkable Woman. 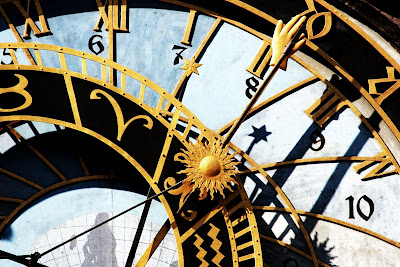 photo courtesy of clarita
Shastri sent me a link to some wonderful photos he took recently of Navagrahas statues, the planetary gods. Their names triggered a memory I'd forgotten - how the hands of Fate led me to meeting a most remarkable woman.

In 2001 I was working as an astrologer (birth charts for advice and career guidance) and had a small column in a local newspaper. One day I answered the phone to a most unexpected caller.

A woman, with a beautifully elegant Indian accent, told me that she had been informed that I was "the one" and would I please come visit her to pick up my books.
My books?

In the course of conversation she explained that she had a large collection of astrology books that she had decided to donate to a worthy astrologer. Unsure who to choose to inherit them she had torn out the photos of all the local astrologers, from papers and magazines, and dowsed them with a pendulum. The pendulum had chosen me.

And that is how I first met Siromani. I thought, at that stage, that the story could hardly get more strange and wonderful, but how wrong I was!

A few days later I made my way up stairs to the flat where Siromani lived. I rang the doorbell... and a tiny woman came to the door. Small in stature, clearly quite elderly, and very much NOT Indian. Her faded hair still showed traces of the pale blond it had once been and her remarkably bright eyes were a clear sparkling blue. I thought there must be some mistake, but the moment she started to talk I recognised that lovely voice from the phone call.

How does a blond blue-eyed elderly lady in Africa come to have an Indian accent? By living a very adventurous life. Over a cup of tea Siromani told me how she had been born in India, of Scandinavian parents. She had spent her childhood and early adulthood in India and that was where she had studied astrology and dowsing. After marriage she had moved to Africa, where she had worked as a building constructor, an engineer and a water dowser.

Now, a month before her 90th birthday, she felt it was time she started studying something new and more challenging. So she was getting rid of all her old books and focusing on books on herbal medicine and alternative healing.

How many people decide to start a new study/career at the age of 90?

I spent a magical afternoon listening to her stories of India and Africa, discussing astrology and books in general. She was one of the most vibrant and alive people I have ever met. I went away with a box load of antique astrology books and ephemera, but the gifts she gave me that day went far further than that.

As I was leaving I noticed a book tucked into her chair next to her. It was the same book I was reading and I commented on that fact. A book on archeology. I was actually finding it a bit boring, but she said it was well worth the effort and that I should go back home and finish reading it.

I did finish the book and it was worth the effort, but not in ways you might expect. The book led me to pottering on Google looking for more information on some of the ancient civilisation. That in turn led me to joining an archeology forum...
... and that was where I met the Highlander who became my husband.
Coincidence, luck, or Divine intervention through the stars? Who can say? All I know is that gaining a husband was a truly unexpected gift from a most remarkable woman. :-) 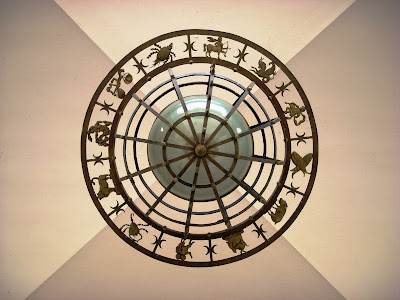 photo courtesy of Kevin Rosseel
...
Posted by Michelle at 09:23

What an unusual wonderful story, Michelle.

And to think i was debating whether i should send you the Navagraha photoset or not!

"And to think i was debating whether i should send you the Navagraha photoset or not!"

Thank you for adding the link to your photos.

Aaah, 'tis written in the stars.... and indeed it is. A most remarkable and memorable tale, Michelle. Thank you for sharing it with us here.

A lovely story, Michelle, and a wonderful one for me to hear right now. This morning I was given a meditation on eliminating things to make way for new. Pruning to allow air to nourish new growth.

What a remarkable story! Thank you for sharing it with us. :o)

What an incredible story, Michelle! She sounds like an amazing woman. Did you have further contact with her? I love the happy ending to the story. I always wondered how that came about :)

Fascinating, Michelle - thank you for the heads up about it. A wonderful memory for you and Himself. One thing that comes increasingly clear with the years :
everything happens for a reason!
;-)

And deciding to learn herbal medicine and alternative healing at the age of 90? I can imagine her vibrant spirit. If I live that long, I also hope to have a vibrant spirit still. :-))))

finally the gods have relented and allowed the ol dafthermit a wee signal here in the soggy mountains..

i have beeen trying to get over here for ages today but all i can say i am so glad i kept at it ,what a lovely story

in live we come across some truly outstanding spirits

well this old damp hermit is off for a wee brew

all the best my friend x

Amazing piece of info Michelle. On a lighter note (if you dont mind)- it has the ingredients of a typical masala Indian film

Thank you. I'm glad Shastri jogged my memory. Back then I wasn't blogging, so I've never had a place to share the story before.

I love the way things "ripple out" - Shastri sends me pics, I write a blog... you find your message confirmed. Wonderful. :-)

I lost contact when I moved, but last time I heard from her she'd just been interviewed by another newspaper.

I thought you'd enjoy that. For your reference - Siromani was a Libran. Oh and I so agree...
"everything happens for a reason." :-)

I hope you're managing to keep dry, and keep that internet connection! You do realise many of us here on blogland consider you and Mel to be "truly outstanding spirits" yourselves? ;-)

Love to you both XX

My grandfather used work the projector in an Indian movie house in South Africa (for an Indian friend). My mom and her brother would sit BEHIND the screen and watch the movies. She can still sing some of the songs. Only the tunes, since they weren't in English she had no idea what they were actually singing about.

Aye we are warm and dry thanks

i get the signal as long as i stand with one of my wellies pointing south and the other pointing north and have my hat squinted to the east ,agh the things you do to saty in touch with wonderful people

Wonderful story of metaphysical importance, Michelle. Thank you for sharing that with the rest of us answer-seeking mortals.

What a wonderful story, Michelle. This put a big smile on my face. :)

Happy weekend to you!

I had a good chuckle at your wellie-hat signal position. That would make a good cartoon. :-D

Sophie and Daisy
Thank you, both of you, for making me smile just as wide too. :-)

What a wonderful story Crow! A lovely example of serendipitous synchronicity at work in the Universe:) Siromani is not just a name - it is a title meaning crown jewel or topmost. It means expert or great teacher. Aren't you thrilled to have been selected for this meeting with such a dynamic and grand lady?

So glad i managed to make you chuckle ,i thought you might like to see a wee film i have done called Water

taling of cartoons i am making some wee comedy films

anyway i hope you enjoy the gift from us to you

I never knew what her name meant. Wow. It fits alright. :-)

I love your movies! I might recommend the trip to Ullapool to a few friends and family I've been trying to get to visit Scotland. I really enjoyed the trip inside the Black Bus too. It's so pretty!

I am so happy you enjoyed my wee films

lots of love to you both