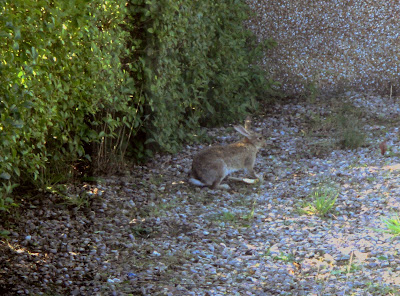 For new readers - Bunny Boy came to our garden three years ago as a tiny "microbun", as my husband called him. He was a charmer from the start - peeping through our patio glass door to human-watch... sleeping in my herb pot on my chives!

Every Winter he vanishes.. and every Spring he returns... bigger but still the same laid-back bunny we've grown to love. He's easy to recognise (rabbits do look a lot alike) because he has a scar above one eye. The first year of life he hurt his eye and we feared he might lose it. It was swollen shut for weeks and he spent a lot of that time lying under our barbecue feeling poorly and limp. But he did recover and the eye looks fine, except for the scar.

He used to sleep under the barbecue as a youngster, but last year he finally reached a size where he was too big to fit anymore. His new favourite spot last summer was sitting up against a tall birdbath. It's shaped like a mushroom and Bunny Boy likes to use it as an umbrella on rainy days. I'm hoping I can get some photos of him doing that this year.

I'm so glad to see him back again... snoozing in his favourite spot by the birdbath. Spring is officially here, it seems. :-)

Hurray! Glad to hear he's back. That's definitely a sign of spring. I saw a bunny in our back yard yesterday too. I didn't get any pictures, but it was good to see him (or her?). We have a lot of them around so I don't know if it is the same one who has nested in our yard before or not, but still glad to see it.

We have a squirrel who returns each year to torture the dogs. I know it's him because he has white on the back of his ears. He's back already, flicking his tail and sitting smack in front of our living room window so that the 3 dog monsters can see him clearly. I can just hear him saying, "Na-na-na-na boo-boo! You're in there and I'm out here!" The doggies go berserk!

Hey, LOVE that pic of Bunny boy...I'm afraid spring hasn't reached this part of the world. I remember taking pics of bunnies in April...we'll see when they're coming out after they change their fur this year he he...

Daisy
I still remember the photos you took of the tiny baby buns in their home in your garden. :-) They were so darn cute.

Hi Betty
Oh my... the squirrel sounds a delight, in that slightly horrid-naughty way squirrels can be! lol

Amel
It's been a longer winter here too. We have no snow, but there's still lots of snow all around us. My sister-in-law still has to dig her car out in the morning. I look forward to hearing when the Finnish Rabbits return. ;-)

It was nice to read this and bunny seems to have found a safe place to stay. I am sure Spring is here to stay. Here the Gophers are back, and soon we will have our robins.

where does Bunny boy disappear for the winter?

Vasant
That's the great mystery. Most likely he goes back to the other wild rabbits that live in the wilderness area above our house (full of rabbit holes!), but in fanciful moments I imagine him holidaying on his yatch in the Caribean... sipping a carrot juice. ;-)