...
I haven't done a newsflash in ages. In fact... I realised yesterday that I haven't written anything on my blog in over two months! Photos and videos don't count as writing a blog, so here's a NEWSFLASH for Spring. :-)

glitter-graphics.com
Nature Entertainment Wise words Spirit Family Lessons Artist Smiles Health
NATURE
Bunny Boy returned in Spring, as he has done ever since the first spring he arrived as a tiny baby, sleeping in my herb planter. ...BUT this time he brought family. :-) There are now two baby buns pottering around the garden with Bunny Boy... bunny dad?

They are excessively cute, but way too small to photograph decently. There's no way a little fuzzy blob in a photo can capture the true delight of a snoozing baby bun lying stretched out on a concrete path, fat paws flung out flat, wiggling it's teeny white tail... Mega cute!
ENTERTAINMENT
The best entertainment in Spring is Spring itself... 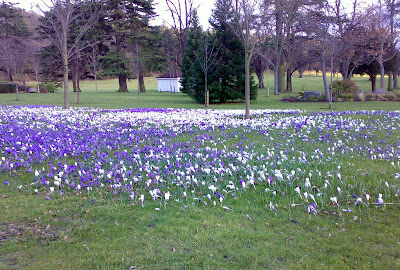 WISE WORDS
My Wise Words choice for Spring are from my friend, Den...

"Here the family/tribe begins to feel like an uncomfortable place to be. The fear of thinking and being different struggles with the desire to know the truth and live the truth. Questions make tribe members uncomfortable, it is boat rocking, it is disrespectful and it is the first steps in the Grail Quest, that quest for Truth, purpose, meaning and the path of the spiritual.

It started here, but it has never ended. I believe in questioning everything and I find truth holds up to questioning and that builds a foundation fit to stand upon. Conforming means being loved, accepted, being part of the family or group, striking out alone for real Truth is a lonely and fearful adventure, but it is worth it. There are other treasures of understanding and love without conditions to behold..."

SPIRIT
This week we watched the last episode of a TV show (BBC2) about a man striving to find his own spiritual understanding of life and money. To quote the Daily Mail...

"Anglican priest Peter Owen Jones is to be filmed living without money for eight months for a major BBC series as he turns to a 'simple life', it was announced today.

His challenge will see him begging for food and shelter, bartering his skills for scraps and living off his own produce.He is following the teachings of St Francis of Assisi, who was himself inspired by Jesus's sermon to live a life of 'voluntary poverty' as the key to deeper understanding and fulfilment.

The presenter had felt as though he was caught up in a pointless frenzy of spending."

The show ended on a slightly glum note as Owen Jones failed. He was forced to return back to using money, just a few weeks shy of the end, when his car insurance became overdue.

What struck me about the exercise was that, as well intentioned as he was, he seemed to have missed the point. As someone having lived in Africa where money is often none-existent or completely without value (as in my birth land of Zimbabwe) I have been stunned by the obsession with spending in the "Western World", but the spending frenzy doesn't make money "bad" and bartering "good".

Money isn't the problem - it's how and what we choose to value that's the problem. When we value new over enduring and flashy over beautiful. Money is merely a symbol of how we value the world around it and our fellow man. What's disturbing in the modern world is how distorted those values can become, but that isn't money's fault.

If we choose to accept that a "celebrity"earns millions and many dedicated hard-working people not enough to live on... that's not money's fault - it's our value system.

If we choose to spend on items we don't need, purely because the media say we have to have them... that's not money's fault - it's our value system.

The power of good or evil lies in what we choose to value, not in the inanimate.
FAMILY
Family life this Spring was chaotic. Check Health to find out more.
LESSONS
The lessons this Spring seem to be that learning to adapt and change is a vital part of any evolution. In Nature one volcanic eruption has sent a ripple of chaos through human air space. In politics Britain took a leap of change and decided to try a coalition government. All around us the world is changing and Spring reminds us that change isn't just death of the old... it's also the herald of birth of the new.

ARTIST
My Artist choice for Spring is Gypsy Mare Studios. Do go look at her blog or Etsy site. Her work is amazing. 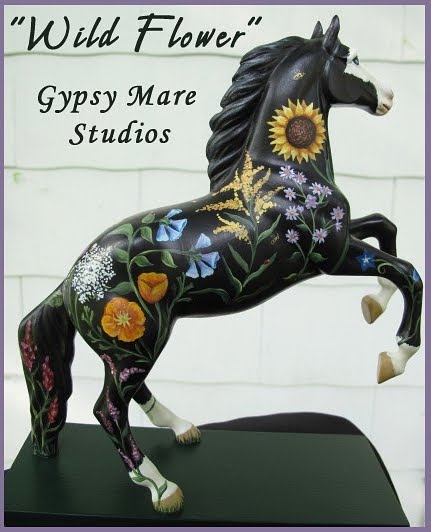 SMILES
The biggest smile of Spring is all the new life out there - lambs, baby bunnies, calves and birds tweeting everywhere. Wonderful stuff. :-)
HEALTH
As I said in family - Spring has been pure chaos. All four of us have had some form of test and at least one trip to the hospital. On average we seem to have two visits to doctors every week. The worst was the week before Easter when we had six appointments in one week.

At this stage Mom's waiting for her appointment with the surgeon, but her latest bone scan also showed up severe osteo-arthritis in her spine. I'm still waiting for the results of my bone density scan. I'll be seeing about that and the bone scan stuff in June. So MORE waiting and more appointments. UGH :-(

Last Newsflash (Autumn) I mentioned how much I'm needing to nap. In January I went to the doctor about that, as I was sleeping about 10 to 12 hours a day at that stage. I think it was the fibromyalgia as all they found from my blood tests was inflammation. Now I'm doing the opposite - I'm still tired, but I'm not sleeping well. I've been having heart palpitations and they keep waking me up at night. The doctor says they're caused by stress. I started medication for that this week - anti-depressants. Hopefully they'll help calm me down. I've been struggling to function normally lately. My brain fries on stress. I freeze up and blank out a lot. Then I get really tired and just want o sleep... except I can't because of my heart thumping. Not good. :-\

Part of that stress has been worrying about my mom's constant pain and part has been worrying about hubby. He's had four sets of blood tests and two scans at hospital. They finally know where the problems are, though not yet what's caused them. They are treatable with medication and life changes so... not as bad as I feared when they dashed him in for scans. Doctors should never dash you in to hospital without explaining why. It scared the life out of me!
Dad has a small surgery in June so at this stage we only have four medical visits booked for summer. Let's hope it stays that way. I have seriously had enough now!

Here's putting in a prayer for a peaceful healthier summer. ;-)

Michelle, I'm sending up a prayer for your health concerns here too. Wishing you and your family well. We've had a baby bunny in our yard here recently too. I've seen him several times, but he won't let me get close to him with the camera. Runs and hides when I get it out. Hope you have a nice weekend! :)

Hoping that all of the health challenges resolve quickly, leaving each of you blooming...

wonderful words on the money thing. so, so true. I'm still finding it difficult to crank back, but am MUCH better, more thrifty than I used to be.

personally, I'm hoping Den's words are WRONG. Must agree that I've forgone much comfort/inclusion/love because I choose to question and find truth. Have not yet, however, given up hope that one can meet enough others also on the quest to make it possible to find/ create community. I have set my priorities, but have not given up.

Daisy
Thank you for the prayer. photographing small critters is very frustrating, isn't it? But they are such fun to watch. :-)

Hi Hayden
Thank you. Well... I'm working on the health thing in all ways I can think of.

And yes, I agree on the dream quest of finding a community. My frustration is that I know all the folk I'd like in that community, but they're people I know via the net or blogs and pretty much all of them live on different continents! :-(

I looked up and saw two of the nicest smiles on the blogs in those profile pictures.

thanks, Michelle - that's my new, post-moving smile. Lost it for years, was quite delighted when it appeared again this spring.

re: your comment on community - yes - but sometimes I think we are called to help create it. To each show, in our separate ways, how life can be lived differently. There are precious few models out there that go against convention. Online I meet so many people who want this - this must be a deeper need that is pervasive, but not talked about. I don't talk about it RT either.

Oh dear about health...I'll remember you people in my prayers...It's definitely not nice to have to do more tests and wait and wait and wait...ugh...and I can relate a bit to your Mom's situation and your stress. When my Mom was in so much pain, life also didn't feel right.

Btw, I REALLY REALLY LOVE what you wrote about money. The Bible also says that it's the LOVE for money that's the cause of evils, not money itself.

And I hope this summer brings you wishes and dreams coming true too. X