The Story of Wow

I met her for the first time, sitting outside our local grocery store in Africa. She was sitting on steps by a parking area and what made me take notice at first was the fact she was still wearing the traditional Xhosa turban style head scarf and long skirted dress. As if aware of my stare, she turned and smiled at me, which was a bit startling as she had only one tooth in her mouth as far as I could tell. She looked ancient, but a hard life can age people fast. Judging by her traditional dress and bare feet, this tiny elfin old woman was probably rural.

Much to her obvious delight, my route to the shop entrance took me straight by her. She began to talk to me, waving tiny skeletal hands as she chattered away in Xhosa in this very high pitch old voice. She sounded like a Xhosa chipmunk. I smiled and nodded as I walked by. I only know four words of Xhosa. I had no idea what she was talking to me about, but she was smiling and laughing as she spoke and her happiness was infectious.

On the way back to the car with my groceries, I saw she was still there, looking equally thrilled at my return. I wondered how I could dodge another super-long and incomprehensible conversation and, completely on impulse, I handed her the money I was holding. My change from the grocery purchase.
That was the first and last time I ever heard her speak English. She gasped and said (loud and shrill), "Wow!" Then she took my hand in both of hers and kissed it.

I felt like such an ass, but two Xhosa people passing by smiled at me and commented on my kindness and that helped. And it did shut her up. I managed to get to the car with only a chorus of "Wow! Wow!" She waved as we drove away.

And so began our family's friendship with Wow. I never found out her real name. It's possible she did tell me, because from then on... she told me a lot. I just have no idea what it was. Every time my mother or I saw her in town, she'd wave madly as if we were family she hadn't seen in years. If we met out of the car, she would talk and talk... and talk. The fact we never spoke back never seemed to bother her. Did she know we had not a clue what she was saying? I don't know and I don't think she cared. And always, regardless, she was in a good mood. Always.

I could have called over someone to translate for us, but I never felt the need either. There was something strangely delightful about our long chats without verbal communication. Something lovely about the fact we could stand smiling and laughing, two women of completely different ages, cultures and races just enjoying a moment of sharing time with each other.

What do I know about Wow? She was a charmer and knew how to use that. I never ever saw her begging for money, but our local store knew her well as a low-grade con-artist. She'd take her groceries to the counter, put down her money... and it would always be not enough. And almost always, whoever was in the queue would see this wispy little old dear counting out her coins and offer to pay. But she never pushed it. Her purchases were humble: a half loaf of bread or a small carton of maas (a very popular sour milk drink).

One winter, my mom and I decided that rather than giving our bag of clothes to charity, we'd offer the warmer goodies to Wow. We had noticed how threadbare her only jumper was, a hole at one elbow as she waved her hands talking. We found her on the side of a road and, slightly anxious as we didn't want to offend her, stopped and showed her the clothes. Once again she was full of delighted "WOW"as she rummaged through our offerings. Then she put everything on. All of it. Transforming herself from an elfin twiglet into a multi-layered Babushka. That fitted our hunch that she probably lived in the nearby squatter camp. Another friend of ours who lived there had told us how things worked. When you lived in a house with no real door, you have no security from thieves. You keep your valuables on you and that includes wearing all your best clothing.

There is one particular time I saw Wow that is especially poignant. It's the only other time I heard her speak something other than Xhosa. At the time, my grandmother's weak heart had led to her needing to be on an oxygen machine 24/7 at home. She also had an oxygen bottle that was meant for emergencies, but gran used it up mostly on trips out in the car. Nothing was going to keep my gran home! This particular day, my mom and I had taken her out for a drive. We stopped at the shops for a few purchases. I was in the back seat, gran's oxygen bottle on the floor next to me. Wow spotted us from across the road and came over for a chat.

Wow stood, leaning against our car as she chatted to all three of us, clearly enjoying herself as always. But then, somewhere in all the animated squeaky chatter, Wow noticed my gran's oxygen tubes and leaned sideways to follow them to the oxygen bottle on the car floor. as the realisation hit her, her eyes welled up with tears. For the first and only time Wow was silenced. With tears brimming, she looked at me and said, "Ag shame... Ag shame." A South African phrase that stretches to fit anything from outrage to deepest sympathy.

Wow leant in and patted my gran on the arm, repeating the only words of comfort and sympathy she knew in our languages, "Ag shame..."

I remember how stunned I felt to realise that this frail, homeless woman that most would hold in pity was feeling the deepest pity for my gran. It was a realisation that whilst we had thought of ourselves as rich and Wow as poor... at that moment Wow considered herself far richer than my grandmother.

How do we judge ourselves and others? What makes our lives rich or poor? Wow was a huge lesson in the fact that every life has richness, things that are a blessing or a strength, it's all in the perspective.
Posted by Michelle at 13:51 5 comments:

I've been doing Blogblast for Peace for nine years and this was the first time I felt like quitting. Why? Because I felt a complete lack of hope. Let's face it, 2017 has been a year of stark revelations. Our climate is going crazy with fires and floods, our media is full of stories of abuse, lies and corruption and too many of our world leaders have turned into petulant toddlers.

But then the most unlikely event brought me back - a complete lack of hope.

You see, one of my dearest blog and internet friends died this Nov 1st. "Tint" had been fighting cancer for several years and I do mean fighting quite literally. This was an epic battle, but Tint was never a quitter, no matter what life threw at her. I haven't one single memory of her acting negative or defeated. She tackled every setback with cheerful determination. Tint had a rainbow aura, full of joy, humour and kick-ass hope.  I've never seen a photo of her where she isn't smiling or laughing.

I've spent this past week in a chat room vigils with Tint's friends and loved ones, all of us waiting and waiting.... We were gathered together by Tint's daughter and we have stayed there in love and support, but in the full knowledge that there was no hope of a last minute miracle.

Now I'm sitting here writing this and thinking.... It seems to me that all of us who want Peace and a better world have been just the same, constantly setting out with cheery optimism and hope that change is possible. But what do we do when there is no hope? What do we do when a war is inevitable, violence explodes around us and the world staggers towards hate and fear? What do we do when we lose hope?

I think I know. When you lose hope... you find Grace.

Hope is wonderful, there's no denying, but it can also be a burden. It implies that failing is bad or wrong; that we didn't try hard enough. Truth is that sometimes we can try as hard as possible and still fail.  So here's the thing, dear Peace bloggers and world-changers. We may never stop war entirely. We may never see humanity reach a stage where there aren't some still capable of violence and destruction. We may never save every species from extinction or save every child from trauma and tragedy.

The loss of hope does not automatically mean failure. Tint's death has shown me that. Her life was a rip-roaring adventure, full of unexpected twists. She lived it to the full and left a legacy of friends all over the world whose lives are changed for the better for knowing her. And she leaves behind a daughter who is one of the most lovely young women I have ever been honoured to know and a new baby grandchild who shows every sign of growing up to be as wonderful as his mother and grand-mum.

Love doesn't bring about miracles, it is the miracle. Nothing is stronger than Love. The greatest gift we have is this connection to each other. The love found in friendship is a miracle we often take for granted. I have spent this past week in vigil for my friend Tint with the most amazing bunch of men and women. I am now asking you all to join me and hold vigil for our planet. Do we have hope? I don't know... and maybe I no longer care. We have each other and we have love. That is enough. 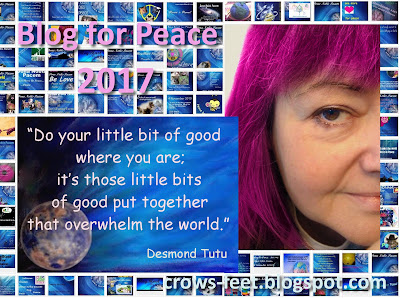