I've used this photo from NASA in my 2016 Blog4Peace globe design. Isn't it stunning? All those stars... 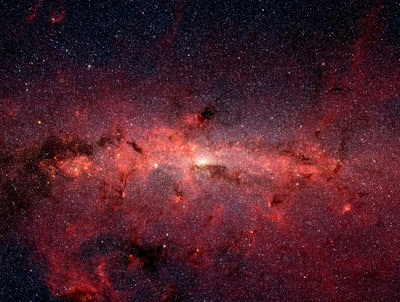 Did you know that astronomers estimate there may be 100 thousand million stars in the Milky Way alone? How vast this place we call reality is... and how utterly small and insignificant our world events seem by comparison. The violence, wars and politics that rip our lives apart here on Earth fade to nothing when seen beneath the light of 100 thousand million suns.

All that light and energy swirling around us... it reminds me of a photo I've seen of the great visionary inventor and scientist, Nikola Tesla. Here he is, sitting with his "magnifying transmitter" in the Colorado Springs Laboratory. 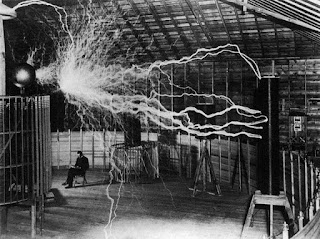 Tesla performed many experiments at his Colorado Springs lab, including ones to investigate atmospheric electricity and lightning.

I knew about Tesla's experiments, but it was only recently that I discovered he was passionately anti-war. That's why I decided to use a Tesla quote on my Peace globe this year:

"Peace can only come as a natural consequence of universal enlightenment."


When I first read that quote, I wondered... are humans capable of reaching a state of universal enlightenment? I look around at the world and it seems like the more we try to make a difference and bring peace the more things refuse to change. Generations of people talking, writing, creating art and protesting for peace and yet too many humans still see the use of force as the only solution to any problem.

What chance do the peace makers have of making a difference? We are a scattering of people on a little planet floating in a galaxy of 100 thousand million stars.


... and then I remembered Tesla's butterflies, haloed in blue fire.

Tesla showed the world a new way to see and use energy. He even put forward the concept of the Earth having its own resonance - it's own vibrational secret song. Can we learn from that? Can we use his discoveries in other ways?

What if enlightenment was something you created through energy rather than action?
What if it wasn't the effort we put in, but the resonance we send out
that made the world change?

There's another famous butterfly in science - the butterfly effect. It's the theory that a small random thing (such as a butterfly) can ripple out to create a much larger effect.What if every human heart was merely a peace butterfly waiting to be set free? Holding in its radiant blue peace fire, simply waiting for the right moment to change the world. No more fighting for peace or struggling towards it... just letting it resonate in our hearts and letting that longing free...

Could we burn the world free from out-dated political systems and old-fashioned mind sets? I think we could... no wait... I KNOW we can. 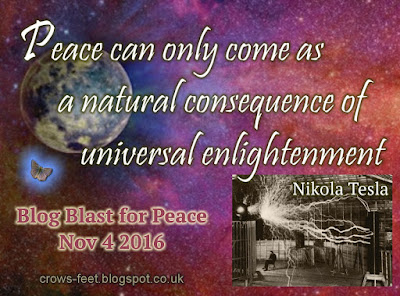