I drew this picture a long time ago, in the 1990s, as an illustration for a book: "Die Dans van die Brein/The Brain Dance" by Shani Grove 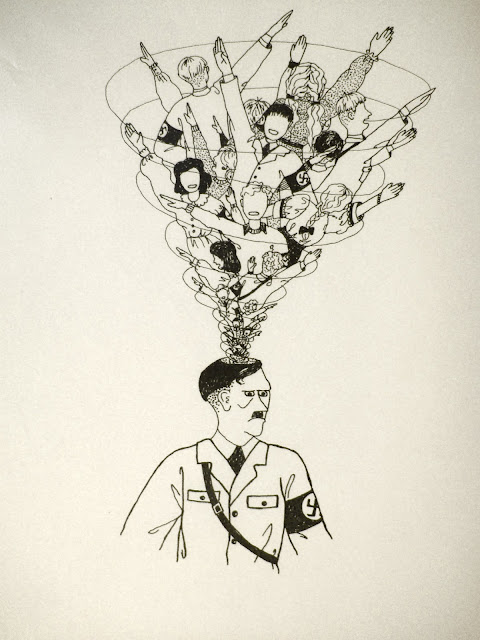 This drawing was for a chapter on how, and why, ordinary individuals lose their self-identity when they join group belief systems. The harmful systems, such as cults and extremist political groups, in particular.

On January 6th 2021, I saw this illustration in action on the TV news when mobs attacked the Capitol Building in the USA. It was a strange feeling. I'd been convinced this would happen for over four years and yet seeing what I had feared happening was still shocking.

I first heard about Donald Trump about five years ago. I guess he was well known to many by then, but I'm not much into paparazzi or reality TV. I had no idea who he was until he exploded into Scottish news with a new golf course he was proposing to build in our county. Within a very short time, he had managed to antagonise a large percentage of Scottish people with his bullying business tactics that eventually revealed him to be a greedy, vindictive, and untrustworthy liar. "What a nasty little man," I thought to myself, and dismissed him.

When he reappeared on the news a while later, as a candidate for the US presidential elections, I was bemused. Did he really think people would vote for a crooked businessman as president? Was he really that much of an egotist? I decided to watch one of his campaign speeches to see.

And my blood ran cold.
I'd seen this scenario played out on old TV news reels, but I never expected to see it live in my own lifetime. No matter how derogatory and hate-based his speech became, the crowds cheered. I don't know how many of Trump's campaign speeches I ended up watching, I just remember the important bits. Like the night he made fun of a disabled reporter and the constant, pounding messages so similar to those that Hitler had used on his own doting fans.

And why did it work then? For the exact same reasons it worked now: because the Germans were desperate for positive change. Germany was reeling from the harsh WWI reparations and the Great Depression. People had no jobs, no money, no hope. They were starving for hope and Hitler fed them the two things needed to fulfil them: a promise of making Germany great again and someone to blame.

Make Germany great again... because it's not your fault, Mr Ordinary-German with your wife and two kids. You are the chosen one. The true people. The higher blood line. You deserve better. You deserve the best. And it was taken from you... by THEM.
THEM.
The disabled, the gays, the lesser races who take your jobs, your women, your country's money and resources. Don't hate yourself. Don't ever take responsibility. Blame THEM and follow me. I will make us great again.
You know, I listed them in that order, because the Nazis used the "final solution" on the disabled and elderly before they moved on to homosexuals, Jews, Gypsies, Jehovah Witnesses...
THEM.

Let's blame them. Let's rally up our mob mentality and blame THEM: the Hispanic races, the Mexicans, the disabled, the homosexuals, Trans kids wanting to be safe in public toilets, fleeing refugees, Canadians, journalists, women with an opinion, Muslims, the Left, The Democrats...
THEM.
You know, even as I watched Trump going on about how evil and bad THEY were, even as I felt that ice-cold fear of recognition, I still told myself I was paranoid. And surely people would not vote this man into office? Surely people would see through his egomania and be turned off by his hate-filled prose? But I'd forgotten my book illustration and that chapter on how easily people are sucked into belief systems that seem insane to those watching from the outside.

For the last four years, I've constantly tried to make those in the spiral see that this man they follow is a narcissist. Constantly said "He is dangerous." He is hate-filled. He twists the truth to suit his own agendas and he cares NOTHING for anyone but his own self. He fuels bigotry and fear of anyone different. He makes them the problem; the obstacle that needs to be overcome in order to make everything great again. In doing so, he has even made good people believe bad things. I know families and friends who have turned against each other because of this man's constant messages of hate.

And now, as the world watches the USA reeling like some boxer punch-drunk from too many blows, I'm saying it again. This man has done serious harm and he will continue to be dangerous until you tackle his legacy: the hate.
His leaving the White House will change nothing until people on all sides return to seeing each other clearly, as individuals of the same country, with the same right to respect. If you cannot let go of hating THEM, there will never be a healthy US (play on words intended).

It's up to all of you now, Americans. Left, Right or whatever; all races, genders, religions. YOU are the country and only your strength and compassion can put it back together again.