...
Two weekends back the weather was lovely and we took a day to go exploring. I completely forgot about it until I was clearing out all the pictures from my mobile phone and found the photos. We decided to go East to look at some of the Pictish stones and circles. Aberdeenshire is unique in having reclining stone circles. That is stones deliberately on their sides, unlike places like Stonehenge where all stones were upright.

The West coast of Scotland was populated by the Gaels, the North saw the Vikings come and go, but The East was Pictish. For those who don't know much about the Picts. The Picts were the people who populated this area of Scotland. They carved wonderful designs onto stone, they most likely were tattooed with similar designs (based on what Romans reported) and they spoke their own unique language.

You can find all the designs and photos/info HERE.

Aberdeenshire is more gentle than the highlands. Some areas look more like England with lush green rolling countryside. I love the names in this area too. It was here, on holiday for the first time, I found Cowbog. This time I noted down a few favourite names along the way. Places like Meikle Warple and Drum of Warple sound like places a Hobbit might enjoy, but would any creature want to live in Windyraw or Boghead? Goblin towns perhaps?

Our first stop was at the very pretty town of Inverurie. There are stones, and two man made "hills", in the cemetery. That hill looks small, but up close it was steep enough to be a bit off-putting to climb. 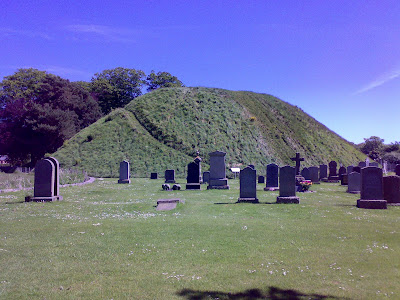 Here is one of the carved Pictish stones. It is a bit worn and hard to see the entire design. 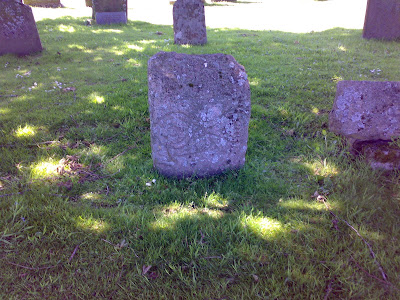 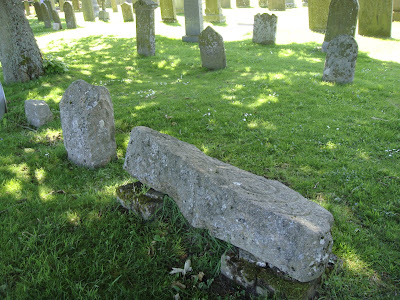 The best part, for me, wasn't the stones. It was the view. Isn't that scene below perfect? It looks like it should be a painting. 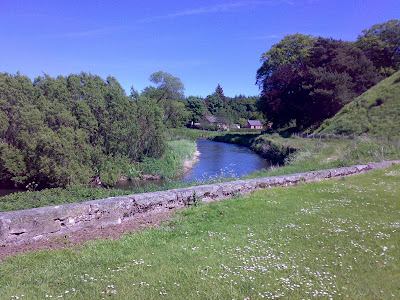 After a picnic lunch we headed off to the next place, a complete stone circle with reclining stone at East Aquhorthies. (another mind-boggling tongue-twisting name)

This circle is set up on the ridge of a hill. The reclining stone here was HUGE. To give you an idea the stones at each end are about 2 metres (6 foot) tall. 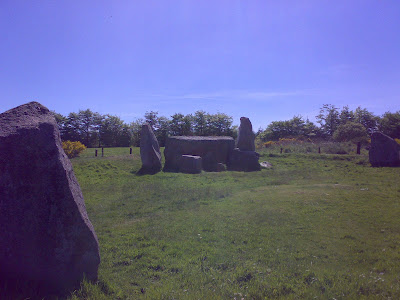 It's hard to photograph a circle. We took pictures from each angle. 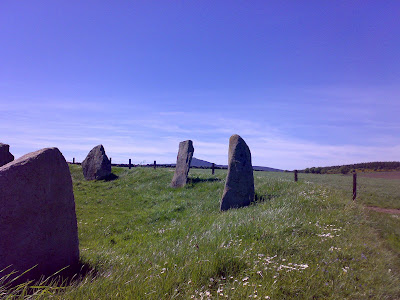 You can see the view from this one. 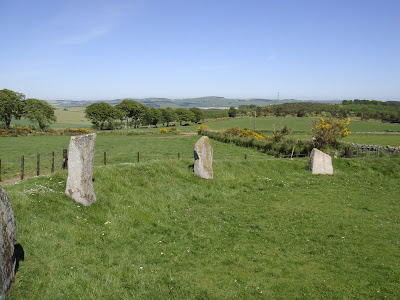 Here's the back of that reclining stone. 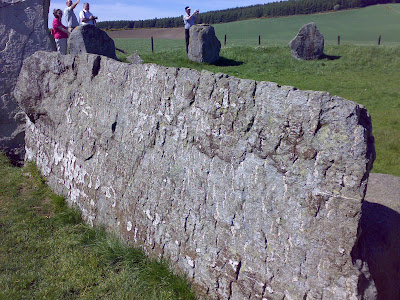 This stone was my favourite. It really was pink, and slightly sparkly. 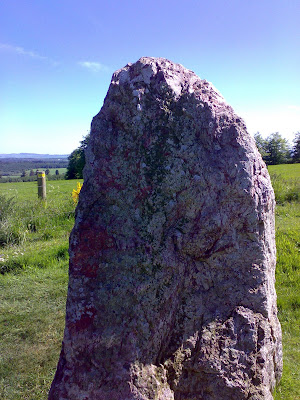 If you're unsure about ordering a book - the new corrected version has 308 pages where the original only had 304. AND... the new edited version has a thank you in the front to my parents and husband Alexander. The old one had his nickname, "Sandy". The Alexander book is the correct book. :-) 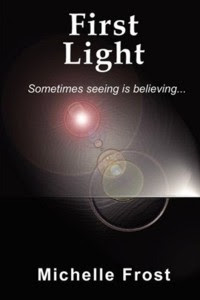 It was available at all the Amazon.com versions. It is also now available at Waterstone's, Borders Books, W H Smith and Tesco online in the UK and Barnes & Noble in the US.

I was hoping to change the old cover, but wasn't able to this time. I have been working on a few ideas and here's what I'd like, if I had the choice. 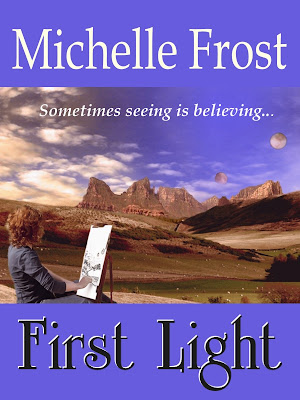 ...
Close ups of the flowers in the field posted below. First the poppies... 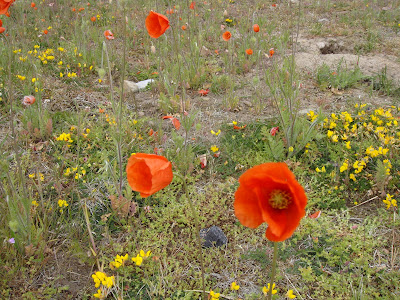 Then wild pansies/violas - yellow ones... 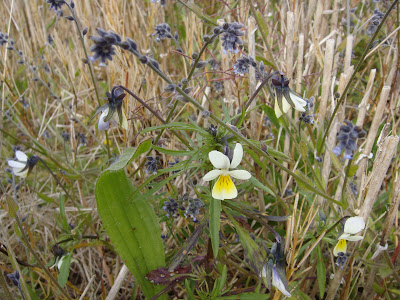 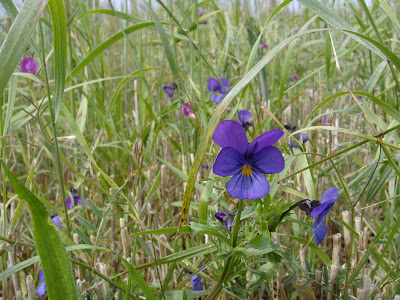 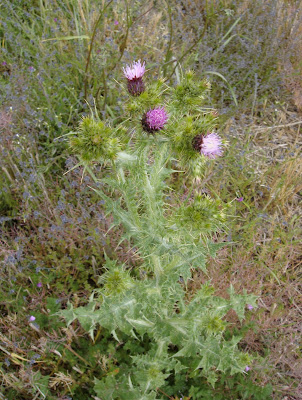 Tiny blue flowers... (edited to add I found out they are probably field forget-me-nots) 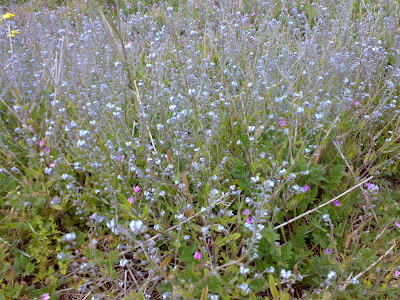 LOTS of the tiny blue flowers amongst pink grasses. How pretty is that? 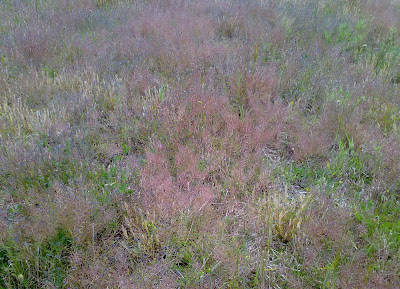 ...
Photos of some poppies in a field. 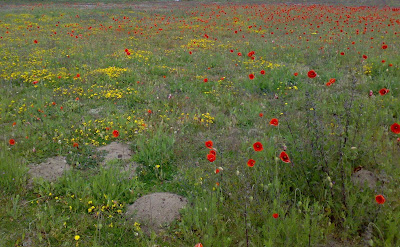 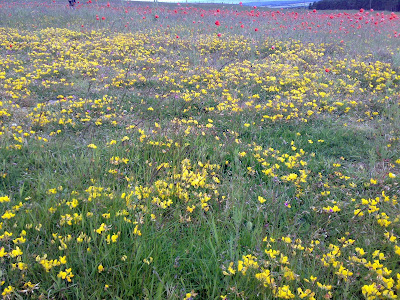 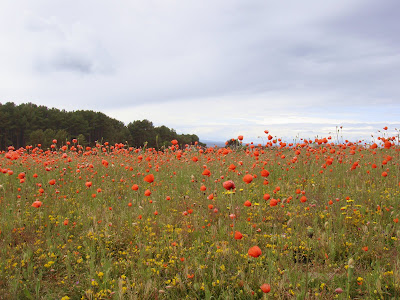 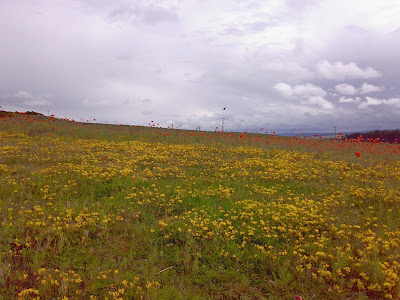 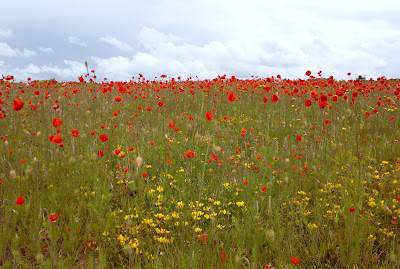 ...
Something really odd happened over the weekend and the curiousity is killing me.

glitter-graphics.com
It's about my other blog - the one I have my poems up on. My poetry blog never was meant to be more than a spot to place a few poems and as such I rarely have visitors. I have a sitemeter up on both my blogs and they update me once a week. The poetry side usually gets 0 to 3 viewers a week.

BUT... since last Thursday I've had about 30 people. 30! Mostly from the UK, but some from America. Not one has stopped to leave a comment. Weirder still, looking at the sitemeter stats they all came through doing internet searches for the words...

homeland poem
I wonder if I'll ever know what brought such a surge of searching surfers over this past weekend?

...
The Broom started to flower recently, as the Gorse has begun to fade. I took a few photos last week. At a glance they look a lot alike, but broom is more lemony, has no perfume/scent and no thorns. This is broom... 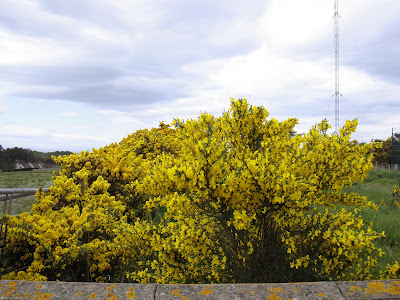 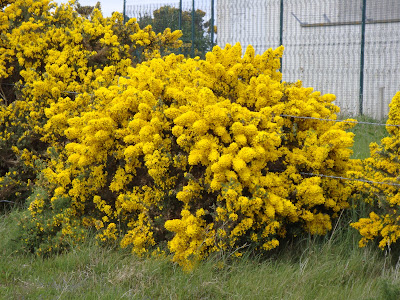 ...and these are buttercups. Unfortunately their petals are so smooth and shiny that the sun glare killed the colour. They were a lovely deep yellow. 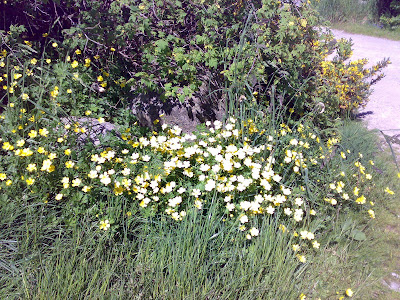 For a Birthday "B"

...
Cliff has tagged me to...
"list six things that are unimportant but make me happy then tag six others."
1. Birds singing outside my window

4. The smell of fresh coffee

5. Standing under a tree

I am tagging:
Orone, because I'm sure she'll have a lovely list of happy things
Derek, because I'm sure he'll find this one a challenge (grin)
Martha the Crow
Amel
Genie
Nick
and
Pete
...because I'm sure they'll all have interesting lists. :-)
* Note to all tagged: No pressure to do this - you can always leave it if you wish.
..
Posted by Michelle at 14:10 10 comments: