This year,  the theme for Blog for Peace is No Freedom, No Peace

"It's hard to remain unbound
when the world wants to keep you in chains.

Are you free? And if you're not, what is holding you back?
I am convinced that no amount of peace can spring from even a sliver of bondage.
Figure it out. What is keeping you bound?

I must admit, this one stumped me. Am I literally free? No. What keeps me bound, what is holding me back? Lack of money. Can I fix that? Unlikely.

Then I thought about the gloriously ironic problem facing the mega-rich preppers. It seems many super-rich are building survival bunkers, in case of the collapse of civilisation due to an apocalyptic event or 3rd world war. Thing is... once the world falls apart, money ceases to have meaning. These darling rich dumbos have realised, after carefully constructing the ultimate luxury survival bases, that those people they take with them as bodyguards and servants won't see any salary as worthwhile once money has no worth.  And then? What if the bodyguards just kick you out and take over your secret blankie fort?

In a post-apocalypse world, money will have no power.
Money as freedom will be an illusion.

Such a hilarious conundrum!

Are the mega-rich paranoid? Are we seeing the collapse of civilisation?  It's possible. Many modern nations possess weapons capable of destroying entire cities or small countries. The modern nuclear bombs are 80 times more powerful than those used on Hiroshima and Nagasaki. How much land can you destroy with a bomb 80 times bigger?

And even before we get to that stage (which seems more and more possible, recently), there's the other problem so many places are facing - internal disintegration. I'm watching my American friends online talking about the polarisation and paranoid hate of their opposing political parties. There's mass-hysteria and paranoia everywhere I turn. I'm seeing it in news and family/friend stories from Africa, Asia, Europe, Britain... our old political systems are collapsing. They will go extinct, same as any other dinosaur, but until that is over our lives are all affected. We are living in a time of flux and change. We cannot stop this; it is inevitable. And that is scary, but also exciting.

The positive thing about the mega-rich realising money is an illusion is that it shows us where the power actually lies. Real power is in your hands. It always has been and always will be. Power comes from people working together. Freedom comes from realising there is no "YOU vs ME", only "US".

We are all one species on a planet that could very possibly tear itself apart. The only way we can get through that, and thrive rather than merely survive, is by realising we are all one. No countries, no races, no ridiculous prejudices based on inconsequential man-made things like politics and religions. We are ONE species, quite as capable of extinction as any other. But we need to wake up and realise that.

Ultimately, the only freedom you have lies within you, not around you. Your mind is your freedom. Your soul/conscience is your freedom. You are as free as your thoughts, when you decide for yourself rather than allowing others to influence or manipulate what you think. You are as free as your integrity, when you base it on your spiritual connection to Creator/Creation rather than the morality of other peoples' ideologies.

Freedom is an illusion until you claim your core freedoms.

And that Peace cannot be taken from you.

I've chosen a quote from one of my books, this year. It sums up my personal opinions as well as the opinion of my book character.

One world - one species.

We are all brothers and sisters. 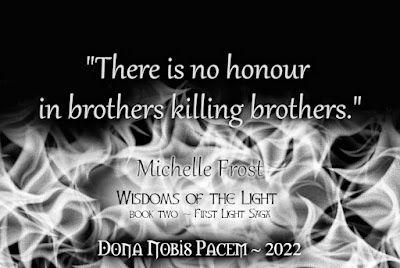