...
Every year I get money from my in-laws for my birthday, but this year I had a problem. I had two birthday cards sitting in my bedroom with strict instructions (and promises given) that they would not be opened till my birthday morning. The problem? Last week I saw something I really REALLY wanted to buy, but my birthday was almost two weeks away. :-(

I wanted to book tickets to go to the Speyfest. The music festival features all kinds of Celtic music spread over several venues and days. It was the opening concert I was interested in. Due to a last minute twist of fate they had cancelled one act and added another... Capercaillie. My husband introduced me to their music. I met him for the first time, and saw Scotland for the first time, to the sound of Capercaillie playing on his car cassette tape. I've been in love with all three ever since. :-)

But how was I going to get to that money without breaking my promise? Simple - I got hubby to open the envelopes, remove money and put the cards back. Am I smart or what? *grin*

The concert was last night. Here's a photo I took of the tent before the show started. Can you guess who's looking back at me? ;-) 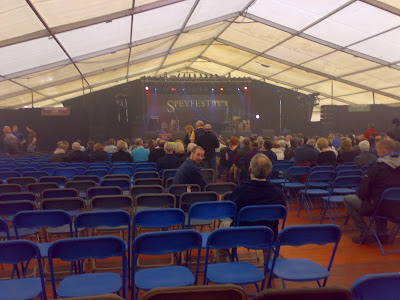 I have lots to tell, and more photos, but that will have to wait till tomorrow.
...
Posted by Michelle at 23:14

I'm glad you got to go. I bet you had a great time. :D Have a nice weekend, Michelle.

Den
I think I'd really like your wife... kindred spirit! ;-)

RA
AND I still have money left for Edinburgh. *big grin*

OH HO HO HO...SMART move indeed! GLAD to hear you got to see the concert after all with hubby!!! WOOHOOOO!!!!