...
The Speyfest opening concert I spent my birthday money on was well worth it! (actually... it only cost one birthday card's worth. I still have money left over for my next treat planned in August. *happy grin*)

The concert started with Calum Stewart, a flautist from nearby Garmouth (where I took photos of Spey Bay recently) and Heikki Bourgault from Brittany on guitar. They started the concert on an upbeat of Celtic melodies interwoven with a modern jazz sound. Light bright fast moving music that rippled and twisted like water in a stream. Calum's flute notes swirled and spun through the early evening, taking the audience with them. I felt like a leaf being whisked between bright stones by rushing Water, down mountain waterfalls into spiraling pools of sound. Cool in every sense of the word! You can hear some of their music HERE.

The next group up was Daimh (pronounced "dive"). These six marvelous musicians describe themselves on their MySpace page as "the ultimate Scottish, Irish, Cape Breton, Californian group."

Within a few beats of the bodhran drum it was easy to hear we'd moved to a completely different element. Daimh's music is full of Fire. Their style is bold and untamed. It reaches into you and pulses through your blood and bones. Even at its most liquid and flowing it hits your senses like a big gulp of good whisky. Things really were beginning to heat up as the sun went down!

Daimh's molten melodies are perfectly complimented by the warm smoky voice of Calum Alex Macmillan (playing the whistle in my photo). 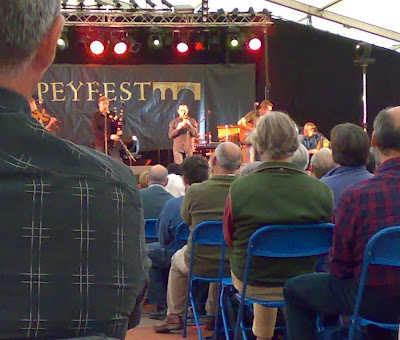 Songs of war, lost love and other strong emotions were interspersed with brilliant playing by all six. I really can't pick one band member who stood out because they all were so well matched in their talents and skill. They were excellent.

To follow on from such an impressive musical high would be daunting to most musicians, but Capercaillie are truly in a league of their own. It was such a thrill to see them all on stage, including the amazing Karen Matheson. 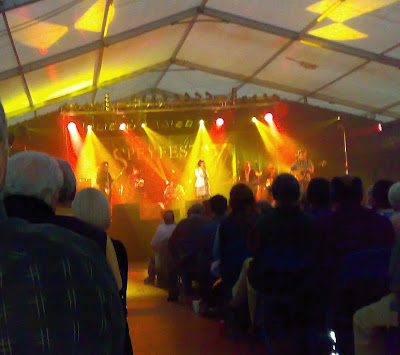 I'd wondered if my sense that the night's music was moving through the elements would continue... and it did. If Daimh were Fire than Capercaillie were Air, which is rather fitting for a group named after a wild bird! Daimh may have set the audience on fire, but it was Capercaillie who lifted them out of their seats and took them flying. 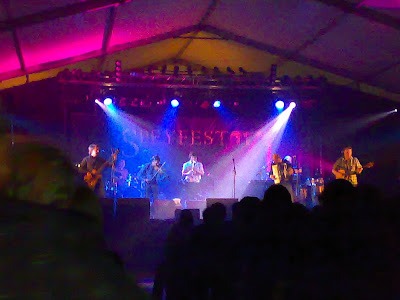 Karen's incredible singing spins your senses. She moves through moods like wind over water. I don't think I've ever heard anyone sing that fast. She takes the Gallic language and transforms it into a living sound.

The group alternated songs with instrumental pieces, all equally delightful. They are all excellent musicians, but I must admit the fiddler, Charlie McKerron, did stand out for me. Perhaps because he was playing to a "home crowd" (he comes from nearby Hopeman) he really gave 101% on the night. Here he is playing his heart out centre stage... 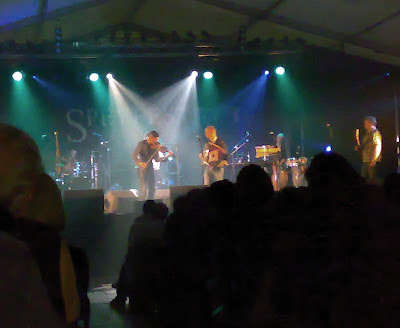 Capercaillie's music flew us through the rest of the night. Pure, perfect Air music. I felt like a bird flying over the soul of Scotland, all its emotions laid out beneath me in clear notes and melodies. The joys and dances as light as a spring breeze over rolling hills... the sorrows and songs of mourning carrying you high above dark cliffs and crashing seas.

Like I said yesterday, I came out to Scotland to meet my True Love and fell in love with a country and a music group at the same time. My future husband drove me all over Scotland to the sound of Capercaillie on the car cassette tape. Even now, eight years later, there are Capercaillie songs that take me straight back to those first magical moments of discovering love. For me their music is a part of my love story as well as the music of a group I love and I was really thrilled to hear at least four of my favourite songs sung live at the Speyfest concert. 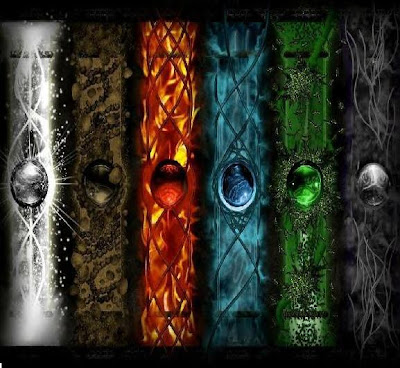 "And what about the fourth element?" you ask.
Well... it was there too. I first noticed it in the middle of Daimh's session. I was listening to the beat of the bodhran when I started to notice another more resonant beat. There were no other drums being used on the stage and I couldn't figure out where the beat was coming from at first... until the floor started to throb beneath my feet.

The drum beat was the sound of people keeping time with the stamping of their own feet. They kept it up for the rest of the night, through Daimh and Capercaillie, and I was driven to join them. As we all added our own heartbeat to the music I felt more connected than I ever have before. I've always felt connected to the land and wilds, but this was the first time I felt connected so deeply to the people. As all our feet used Earth to drum a beat I found myself thinking of my Scottish and Irish ancestors... Earth and sound reconnecting me to my own roots.

When they finally finished the audience refused to let them go. This photo below of the standing ovation is blurry due to all the clapping, waving and foot stomping! 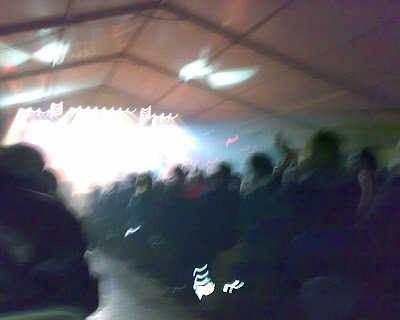 They returned with an extra finale treat - Karen brought with her Calum, the lead sing of Daimh... 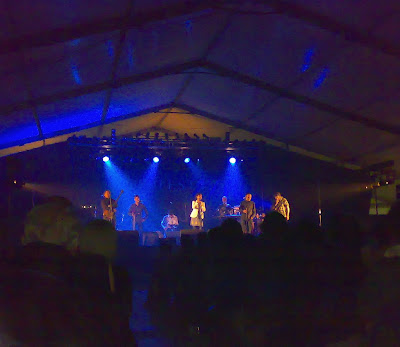 Together they sung one of my favourite Capercaillie songs. They were fantastic, the audience went completely wild with people dancing and everyone joining in singing along.

What a wonderful review of your evening, Michelle! I felt I was right there with you! *shivers*

Oooh, all this sounds magnificent! I need to go browse in Youtube for more.
I'm grinning here about your August remark.... :D

What a fabulous night! Your birthday treat sounds marvelous, Michelle - money well spent for making such lovely memories ... and recalling other lovely memories :) I am so glad this turned out to be a memorable night for you (((Hugs)))

WOW!!! Just reading the post made me feel as though I was right next to you, you know? Your words have power like that, M...WONDERFUL!!! You've got a way with words...

Michelle, that is a GREAT review - far better than most "professional" ones I read. And unlike theirs, this one really made me long to hear the music.