NEWS
September has been a weird month. It seems to have been a time of "full circle" closures or things coming to a head.

Amongst my friends and family there was one birth, one wedding and five marriage break-ups. One family member flew across the world to start a new life in Australia and a blogger friend is soon to go travelling home on holiday... safe journey Amel! :-) Two good friends recieved "all clear" news on their personal battles with cancer and another friend was diagnosed with cancer.

With the recession in the building industry here all connected industries are faltering as well. The factory where my dad works is cutting back hours of work and the construction company my husband works for is drastically downsizing. We still don't know if hubby will have a job at the end of this year. A good friend has already been told he won't be there in November. It's like holding your breath, only we've now been doing it since late August when the company warned staff that cuts were being made. No surprise we both feel a bit blue (pun intended) at this stage!

There's also been lots of emotional stuff surfacing with friends, families, and family of friends... It's been a very intense month.
ENTERTAINMENT
Hubby is still working weekends, and my dad works Saturdays, so we haven't gone anywhere or done anything as family fun since our holiday break in June/July. The only entertainment has been BunnyBoy, the eccentric and charming wild rabbit that owns our garden. 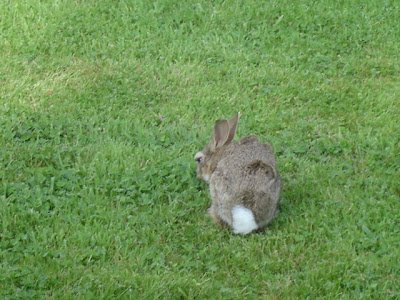 WISE WORDS
This one was "WORK", but I have changed it into my favourite quote for the month instead, with one important twist - they have to be words from a fellow blogger! My Wise Words choice for September:

Dare to venture beyond your present horizon and experience what is there.

From Kerry at Jade Gryphon's Tavern


SPIRIT
I write a lot about my spiritual connections, but not often about my connection to God/Creator. Last time I can remember talking about that topic was here in Elephant Eyes. This month I have felt really... displaced (for want of a better word). I prayed for an answer, something solid and substantial, since when I'm stress vague really doesn't work for me!
Two days later I recieved an email with a photo in it that almost exactly matching a dream I had about five years ago. A photo of a girl and elephant resting their heads together. I can't publish it as it is copyrighted, but I can copy and paste the written message that went with the photo:

Have you got the habit of accumulating money, and not spending it because you think that in the future you may be in want of it?
Have you got the habit to keep reproaches, resentment, sadness, fears and more?
Don't do it! You are going against your prosperity!
It's not the objects you keep that stagnate your life... but rather the attitude of keeping...
When we keep in store, we consider the possibility of wanting..
With that idea, you are sending two messages to your brain and to your life:
That you don't trust tomorrow...
and you think that the new and the better are not for you... 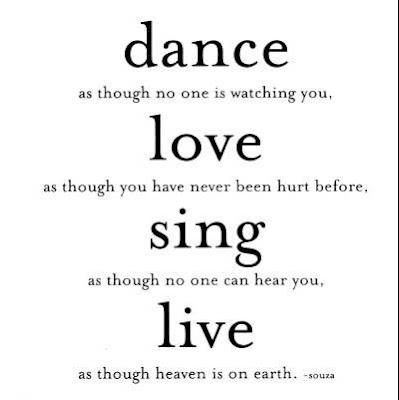 
FAMILY
Family has been following the pattern of clearing out or coming to a head. Nothing specific, just an overall theme. I think it's good, but it has been draining at times. One cousin finally left his wife, who has admittedly left him several times herself before now, to start a new life. Another cousin has just had his wife leave him. Three other family members stand on the brink of making some huge life-altering decisions. I pray they all make the right choices. Closer to home the ongoing family theme is health issues and work issues - it's been a tiring month.

LOVE
Amel was writing memories of when she first met her husband and they brought back lots of memories for me too. One of the memories she sparked off was the memory of the day we said goodbye at the airport. I'd been over in Scotland for a month and had to return, not knowing when we'd see each other again. It turned out to be six months, but at that time we really had no idea how long it would take to arange marrying and living together in one country. So it was a very intense goodbye... except there was no time to say goodbye!

We had arrived at the airport in time, but the baggage section had "issues" over my two bags - one was too light, one too heavy. I had to repack with everything balanced on the coffee shop table and my future husband dashing back and forth getting them re-weighed. By the time the baggage was accepted the last call had been made and we only had time for a quick hug and then I was in the queue to get on the plane.
The terribly hard part was the fact that the long queue snaked in a zigzag between ropes. So three times I had to walk towards the man I loved and walk past him, literally a foot away, without being able to touch. :-( It was one of the more horrible moments of my life. The flight back was bleak. I spent most of it crying in toilets. on planes, in airports...
ANXIETY
See News and Family. :-\

SMILES
Smile of the month goes to a dear friend who gave me a sentence that both makes me giggle and feel good. When I was talking to her about all my worries and health woes she said, "Drop-kick them to Jesus!"

HOME
Home is an ongoing issue. Some people thrive on continual moving, some don't. I'm one of the don'ts. Oh, don't get me wrong - I LOVE travelling. I could be up and out the door every single day, but at the end of my adventures I want a solid home base to return to. I'm a bear more than a swallow... no... I think I'm a tree. :-D That's what I actually dreamt last week. I dreamt a woman said to me "Wow - you're a tree! Teach me how you do that."

Still looking for that place...

And the best news is that you are keeping your head up through all this.

God bless and have a great October!

You know, I've never really gotten the hang of September--it's kind of like a Thursday. It's not really Wednesday, but it's isn't Friday, either.
Perhaps October will be easier.

I feel for you right now. Life is a roller coaster for us too. It's quite scary. A lot of it, in our case, is due to hubby not taking care of things the way he should and that frustrates me because there's nothing I can do to motivate him, it seems. I hate being so dependent on a man who I know can barely take care of himself let alone me. It was okay when I worked because I learned to depend on myself and actually found a lot of freedom in that so I learned to be grateful for an undependable man. But I can't work anymore and I'm back to being dependent on the undependable. !!!

Sorry, you're drama filled Newsflash made me keenly aware of my own drama.

I'm sorry for all that you and yours are going through. I especially feel for you and your Dad's and husband's work situation. Scary! I'm happy for the good news two of your friends have received. Congrats to them and to the new parents and the new couple.

For your cousins, I pray for wise choices to be made and for new horizons to be worthwhile!

I should go read my numerology report for October because September has just been dismal.

I agree, it has been an intense period. I hope you'll find peace and joy in everything around you (including bunnyboy) and that your hubby and dad's jobs are safe. I love reading about you and Amel's love story. Very touching.

Times of turmoil such as you describe can leave us very stressed and feeling at a bit of a loss as to what crisis to address next. You have made it through and to the other side of tough times before and you will make it through again. Finding joy where you can as you do in watching your resident bunny is an excellent way to relieve some of that stress and help you cope. I hope things start being much more peaceful for you in the months to follow.

I've got mixed emotions when reading this post, M.

Sorry to hear about the break-ups and THANKS for the well-wishes! I'm excited and slightly worried about my trip he he he...Will I cope with the weather change, the traffic jams, etc. etc.?

I've bought tickets to Sgp, though, so I hope I can meet my Singaporean blogger friends. So this is another EXCITING thing to look forward to he he...

I'll remember you in my prayers when it comes to health and work issues.

And GOOD LUCK in finding your groundddddd...

I'm sorry I've been so lax in replying. It's been a weird and crazy week here.

Love back to you!

Thanks for the update Michelle - sorry to hear things are a bit complex for your family at the moment.

It seems like many of us are going through an unsettled period at the moment - in my case I've been running on empty for months and this week I had to move house under those circumstances - at least there's some light at the end of the tunnel with my second job, but that means less personal time again :-(

I hope things work out okay for your husband and dad - hopefully there are other industries in your area that can take up the slack.
And I really hope you find the right place which you can call home and feel settled.

PS: - from experience I can say that even the longest most "hardened" long term travellers ultimately dream about a place they can (one day) call home... ;-)

I read this post feeling as though I'm reading my family's story...not the exact details, but the ups and downs, the uncertainties, the hopes too.

Everytime 'bad' stuff happens, I resort to that old 'this too shall pass.'

Big hug for (((J-J)))
Hope you find some peace, prosperity and a place for your own tumbleweed roots. x

G-G
For me the biggest gift of the internet was realising how small the world is. Whether I talk to someone in Iceland or Asia - everyone has the same basic dreams and fears.

Thanks for the quote/reminder. It does help. :-)