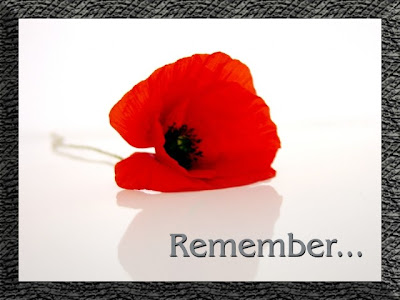 Remembrance Sunday is usually the second Sunday of November, closest to Remembrance day or Veteran's day, November 11. It is a day we remember all those who have died in wars - civilians and armed forces.

This year I am dedicating my post for this day to a particular family member - my gran's cousin L Sarrell Ongley, who passed away this year in September, six days before his 95th birthday.

I never met him, but I know him through the loving stories his family tell, the Christmas cards he sent my mom every year and his poems. I was sent the web link to his poems by a family member a few years ago. It was quite a surprise to discover that they were all written during his time as a prisoner of war, in Germany and Italy, during World War II. I'd never realised any of our family had been a prisoner of war.

Sarrell's poems express the stark realities with a wonderful simple truthfulness that makes me want to laugh at his spirit as much as cry at the waste of war. I have picked a small selection of his poems that I am putting up on my blog below this Remembrance Sunday post. For this post I'm only putting one poem, because I think it sums it all up the best.

Sadly sometimes we forget the sacrifices made that allow us the freedom we experience right now. We take it for granted, expect it is our due, and when push comes to shove, we are all to eager to rush in again. A little poem, as rewind in time, paints a much different picture. I am thankful for their sacrifice.

He writes so beautifully. I am touched by his poems. Thanks for sharing with us.

I agree with pv about the freedom...but it reminds me of all the pioneers in the world, too...who have opened up our world so much in many ways (for better or worse)...the time when women's place was in the kitchen only and they only got a meagre amount of education...

Salute to all the soldiers!!!

Yes, we call it Veterans DAy here. It is tough and sad to understand all the cruelties and sacrifices that are fathomed by war. It makes it important to remember and salute and appreciate all soldiers have done for us!

WOW!! What an amazing man your Gran's cousin was. Reading his poems,you can see the difference in tone from 1942 to 1945. I cannot imagine being a prisoner all through the war. He was a strong man and made of great stock to live to 95!!!
Thank you for sharing <3

WOW!! That is really touching! It's really amazing that we can go back in time and learn a bit about what what one... though I cannot even think about what they went through... I have a lot of respect for people who are willing to give up their lives for the rest of us.... Thanks for posting this! Leesa