...
I found some old photos in my computer today. I took this one in the Eastern Cape on honeymoon. The sign on the right read:
McDUCK'S DEERSTALKERS
MAKERS OF EXCLUSIVE HATS
Specialists in Tweeds and Tartans 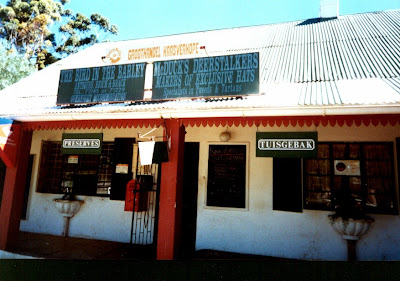 We went inside... but it was a post office. Not a sign of a hat or a tartan... or a McDuck! In fact, not even a sign of anything else they advertised on the outside and since no-one inside spoke English... we'll never know the story behind McDuck and his hats.

I still chuckle every time I look at this photo and think of the mysterious McDuck making tartan deerstalkers in the middle of a very hot dry Africa!
..
Posted by Michelle at 11:56

HA! Michelle, that is funny! Sounds like a story in the making. It is just asking for you to make up one about it. :D

The basis of a story.

I'm with Daisy and Nessa... it's a story waiting to unfold.

It would be interesting to find out about the store. I wonder if it is still there?

It does sound like the making of a funny story, doesn't it?

Then again, truth is usually stranger and funnier than fiction!

I'm not sure about the rest, but I saw "Tuisgebak" and now I'm drooling!

Yeah, that's part of why we went inside, but the weirdest thing was that the rooms were almost completely empty and in one was a post office counter! That was it - no baking, no tartan hats... nothing. So odd.

Sandy became addicted to koeksusters when he was in SA. My mom and I tried to make them once, but they were not a success!

Oh, we ordered food last week. Our Christmas treat. :-) We got braaipap, Robertson's steak spice and barbecue spice (they were on special) and jelly. I don't like British jelly. For trifles I need SA jelly!

Oh... and we got dad six boxes of Ouma's rusks as a Christmas gift, but we've already scoffed one box, to be honest.

The only down side is that the shop doesn't sell everything I crave. But at least we can get some foods from home. Now if only they did koeksusters life would be perfect. ;-)

Hmph! At least there's a shop. Man, what I'd give for some Ouma's. I tried to make rusks once. It turned out ok'ish, but was a lot of work for a half-hour pleasure. Yes, we scoffed them all in one sitting *sigh* I'll make you some koeksusters (I must get baking again), but they'll take a while to get there. Perhaps you should just wait till I get there in person and I'll knock together a batch or three for you... and me. Yummm!