glitter-graphics.com
Last week I got into a discussion about how we label strong emotions hot or cold. A friend of mine said she tends to see hot emotions as good and cold ones as bad. When she's all "fired up" in anger she can tackle anything, but when she freezes her anger... not so good!

I pointed out that I'm the opposite when I'm angry. When I'm fiery, I burn bright, but it's messy and I can burn both myself and others in the process. I have no control.

Cold anger is when I'm able to get things done, to stay in control, but when fear freezes my heart... I'm paralysed and useless.

My friend came back later in the week with another email to say that she'd realised that she'd been mistaking frozen for glacial.

So, what's the difference? Well, for my friend the difference showed when the big chunk of frozen anger inside her grew so HUGE it became a glacier... and began to move.

Slow...
grinding ...deliberate
...and unstoppable.
I was still thinking about that last night when... what did they have on the news? Glaciers! They were showing the affect of global warming on glaciers. The scientist being interviewed said that having Glaciers melt too fast was devastating - because the frozen water was a controlled regulated water source.

Controlled. Regulated. Not a flood, not a drought... always just enough.
Freezing is a good and healthy thing. Nature does it because it serves a vital purpose.In many parts of the world there wouldn't be any water for Spring flowers without the melted waters of snow and ice...

It made me think... are emotions the same? Fear, hate, anger or grief... is an emotional glacier a way to control extreme emotions? As long as you do allow them to become a glacier and not an ice-bound freezer, of course!

If we follow the rules of Nature an emotion "glacier" could be a way to allow strong feelings to melt gently in a controlled manner. A way that allows them to seep away without doing damage.

Sometimes it feels like the world wants instant solutions and fast fixes. Has it made us too keen to do the same psychologically? When we turn a bright spotlight on problems are we shining a light or are we trying to melt thing too fast? Are we merely creating our own personal global warming?

Maybe being aged in ice, until it's time to gently and naturally thaw, isn't such a bad thing at all... 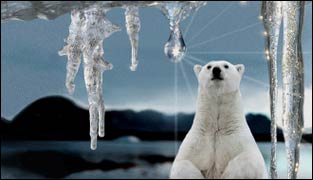 glitter-graphics.com
Posted by Michelle at 10:29

Brilliant. I am speechless. Meta emotional modeling. This is something new for me. I am just beginning to deal with the simpler issue of where our emotions come from. Are they caused by someone else, or are they self generated.

Thanks Andrew. I appreciate your compliment.

Your issue - as to where emotional reactions originate - is probably one of the hardest ones we ever have to try and figure out.

BEAUTIFUL post, M! I also agree that the world wants instant solutions, gratifications, and fast fixes. Lately I've been bombarded with news of separations of marriages from three couples and that makes me think, too.

I'm actually the same as you, M...if I'm fiery, it's messy and I'm NEVER going to allow myself to reach that extreme point anymore - the point of no return, the point where I don't even know what's coming out of my mouth 'coz they come out faster than my brain can formulate my thoughts. That's REALLY scary!!! And I'm also the same with fear - fear may paralyze me and make me curl up like a ball, afraid to make a move he he...becoming apathetic about everything.

Great concepts. Sometimes bold actions are needed and can be very useful, but mostly I think the world would be better off if people slowed down and used more self-control.

Yeah, we sound similar. I'm also more likely to be physically angry when I'm fiery - I've smashed plates, thrown things... must be the Greek blood in my ancestry! ;-)

Hi Nessa
Slowing down sounds good, doesn't it? Too much zoom-dash-hurry in our modern world.

it's said we need both... fire and water/ice..... traditionally fire is the first initiation, followed by water. Fire gets things moving, but iron is forged in flame, but tempered by water. Without the water there is no edge. Some say we are the same.

Different responses would reflect where our blocks are.. what is preventing change.

Michelle, this is a difficult one. When we are young and traumatized, even though we don't know that,our emotions tend to grow inside of us. We are told not to cry, not to act out and basically not to feel. At some point, our emotions become internally frozen, like your glacier. Causing us to lose our ability to feel normal. It takes a lot of work to identify those frozen emotions and allow them to thaw naturally. Of course, this causes tidal waves of emotions and we begin to react to things differently. Perhaps a little angrier,sadder or bitter or maybe even resentful. It helps if you have a support team to manage the overflow otherwise you can drown in your own misery. Better thawed than frozen though. It's easier on the heart.

I like your thoughts. Thank you for sharing them. I'd say, reading you last sentence, that I see a freezer as a blockage/ice situation and a melting glacier as a slow processing of blockages.

It definitely helps to have a support team when dealing with a fast thaw. I was more aiming my post at healthy slow processing vs trying to force things - melt them too fast. Being trapped in a frozen emotion is different to cold or glacial and not at all pleasant or healthy.

What I was also (in a very roundabout way) thinking about was how some therapists are now admitting that unburying trauma doesn't always work. They used to think that making the person bring out that childhood trauma helped heal it, but they have discovered this doesn't work for everyone. For some people it merely makes them relive, and re-feel, the past. They're now realising that shining that big spotlight (melting too fast) can be just as traumatic.