...
I have photos and stories to tell about my weekend trip to Fort William last Saturday. That was for the John Muir Trust Wild Writing prize giving, where I came 2nd in the writing section. I thought I'd post my story here first. It's not fiction and I've posted two photos from my adventures to prove it. ;-)

I wrote the whole thing out in one night between midnight and 4:00 am. That's because I only found out about the competition the day before the closing date! So it truly was a leap in more ways than one.

Leap of Fate by Michelle Frost

Love stories usually end with a marriage proposal, but this story started with one...

I was born in Africa and had lived all my life in Africa. I’d have probably died there too, if it wasn’t for a Highlander I’d met on the internet having other ideas. In 2002 he turned my life around with once sentence on a chat room window.

“Will you marry me?” He asked…

I can’t explain why I was so certain. I’m not the kind for leaps of faith or impulse - I can take thirty minutes to decide between tea and coffee! All I knew was that I had no doubt I loved this man I’d never met and never seen. We did realize that arranging a meeting between a man in the North of Scotland and a woman in the South of Africa was going to take some serious effort. Since he had recently started a new job it made more sense for me to travel to Scotland than him to Africa. So, two months after I first said that fateful “Yes”, I was on a plane and on my way to spend a month in the far North. Little did I know that I’d be falling in love all over again… not once, but twice before my travels were over.

I fell in love with the idea of a man on a computer screen, but I had to travel to the far side of the world to find the real man behind the words. Since he had no chance to take leave from his new job we did the next best thing… I went along with him to work during the week. You can forget your guided tours and bus trips; I can tell you the best way to see Scotland is in a builder’s Transit van. Thanks to a building contract that was mostly rural I got to see more of the countryside in my month’s holiday than any package holiday provides. Admittedly I did have to shovel one ton of sand and scrape thousand year old carpet tiles off a farm floor, but in between was pure magic. What more romantic gift could a man offer than to share the country he loves with the woman of his dreams?

And that was exactly what he did. During workdays he’d take the more scenic routes and he’d stop for lunch in the places he loved the most. There is nothing more romantic than sharing a pork pie in the middle of absolute nowhere with your true love. We shared ours on the way up to Thurso on a spring morning when the air was so sharp and clear it was like breathing diamonds. Every weekend he’d be up at dawn planning where to take me and what to show me. We’d spend the whole weekend driving and walking. I wore the soles off two pairs of African shoes climbing Scottish hillsides.

I think I realized I’d fallen in love with my Highlander the second time when I didn’t kill him for taking me through a bog, a stream, a field and over two gates and a barbed wire fence. How can you not love a man who makes you ruin your last pair of packed shoes, and freezes your thin African skin to the bone marrow, to show you a woodland bursting with bluebells? And how do you describe seeing a bluebell for the very first time - the amazing colour of them and how they smell? Just one would have been incredible and here he had laid out, beneath my muddy feet, an entire woodland of misted blue magic.

How do you explain the wonder of all that mud-making water to African eyes? Rivers, burns, lochs… so much water and all so beautiful, but especially the waterfalls. Rushing down hills and mountains and even tiny ones along the road sides … they’re everywhere! It was all so alien from my childhood of dry riverbeds and violent rain storms, this Northern world of soft seeping waters. I will always remember my first rain, fine as mist on my skin when we walked around Loch Ness and the surprise of richly golden peat tinted water frothing up like creamy ale over rocks and river beds.

I think, if I had to use any word to describe Scottish countryside it would be “rich”. Rich with water and trees and wildlife; rich in history and beauty. We’d drive all weekend and my eyes would be glutted on so much richness... forests of trees I had no names for and wildflowers I’d only ever seen as names in children’s books. I never knew buttercups were so small… or chestnut trees so big! And gorse! Why doesn’t anyone write about gorse? Never mind hosts of daffodils – why hasn’t anyone written odes to the fire of golden gorse flowers blazing on dark hills?

I remember so many richly treasured moments during that holiday. One perfect Sunday afternoon we drove to the valley of the eagles and came across a whole herd of red deer standing in the sun-sparkling Findhorn River. The day our van was stalked by a magnificent male grouse, with outraged scarlet eyebrows, who seemed to think the rough sound of an old Transit van engine was the battle cry of some invisible rival. Even more magical was the night we drove to Skye to catch the morning ferry to the islands. That night we saw a fox cub dancing after moths by starlight, his baby fur as woolly as a lamb’s. Later, on the ferry, we watched puffins that flew past like frantic flapping feathered bullets. Twilight was an adventure in itself; the sun does not linger in African skies. The glow of Scottish gloaming over wild empty places has got to be one of the most enchanted things anyone could ever experience.

How do you describe falling in love? Does it lie in an unexpected touch or the moment your eyes meet? Is it an instant knowing or a slowly growing realisation? For me it was all of those things. Near the end of my holiday we were returning from a job on the West Coast. It was early evening twilight when we came around a corner… and there in the road was a red deer stag. He leapt up the bank beside the road and then paused, looking back over his shoulder as we passed. Like a scene in a dream I watched him as he watched me. He was so close… so still and so beautiful. There was an instant of knowing that my heart was as trapped in this beautiful wildness as my eyes were caught in his calm curious gaze. It was a slowly growing realisation that I had fallen in love a third time… with this lovely, cold strange world of water and stone, sharp light and deep shadows.

And I would never be the same again.

The deer in the Findhorn river that hot spring day. They were closer than they look. 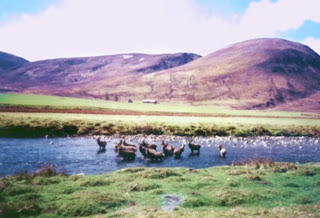 Me in a boggy wood full of bluebells. :-) Sadly they're too delicate to photograph easily. It was just a haze of blue flowers all around me. 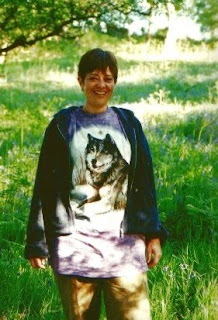 So that's where that happy photo of yours was taken!! And that's why you look so incredibly happy there :) When Tat went to register at the police station (a requirement for Brazilians, but not South Africans as she later discovered), the police woman told her that if she does nothing else, she simply Must go and see the fields of bluebells. I thought of you. I remember you mentioning them.

Your story is... just perfect *smiles* I want to see Scotland all the more now and meet Sandy.

Thanks Tint
Tell Tat bluebells are worth the effort... and they smell wonderful! So do daffodils. Daffodils are very perfumey. ...things no-one tells us "colonials." ;-)

Hi Russell
How nice to see you :-) ...and thank you for the wishes.

Congrats, Michelle. It's a great story. :)

wonderfully told - AND a wonderful story. Your smile speaks volumes!

That was a treasure. Thanks for sharing it.

Oh Michelle! I absolutely loved that! That was wonderful. Congratulations on placing 2nd! I'm so glad you shared this here.

Also, I've been reading your book and am really enjoying it. I've had it a while, but just haven't had the time to start it. It's very well done. You should be proud of all the work you put into it.

Hope you have a lovely weekend! :)

Hey, LOVE to see the pics that went along with the pics. I'm also thinking of entering some writings to some contests sometime this month, but must think first...I'll try doing it this weekend.

As I said before in Facebook, your writings have always been a sensory delight for me. Simply superb! And the best thing about this particular story is that it's a true story. :-D

Wow. I got goosebumps several times reading this! Thank you for sharing your beautiful experience with us! You`re such a talented writer! =)

Thank you RA, Hayden and Travis
:-)

Hi Daisy
Oh wow. THank you and thank you again for buying/reading my book. :-) I'm really thrilled you like it.

Amel
Yes, you must continue with your own writing. :-)

And thank you so much for describing how my writing makes you feel. It makes me feel so great to read that. I keep coming back to reread. *grin*

I hope you stay warm yourself. It's nasty out there at the moment.
X