...
Elizabeth, of Gifts of the Journey, recently posted photos of her books and personal space items. It was such a lovely post that it inspired me to get out my camera and take my own photos. Since we moved 2 years ago I haven't unpacked most of my things. This house doesn't have a place for me to put my big book shelf and my little wall shelves, so the books and things that go on them are still packed away. BUT I do have a small bookcase in our bedroom . :-) It has some of my old favourites and new gifts I've received the last two years.

Top Shelf from left -The carousel horse globe is old... and gone yellow! :-( No idea why, but I still love it. The little black box and carved wooden box are both new-old gifts from my dad. "New-old" means bought from a charity shop or the recycle shop. I like old things with character. In between is a saucer thing which holds some of my stones. I collect all kinds of stones, but my favourite are river and sea pebbles. :-) 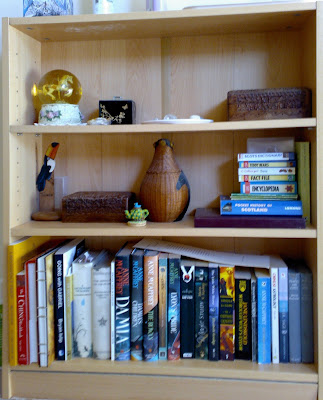 A close up of the Top and middle shelf. the middle shelf has the bookmark I got from my friend, Tint, for Christmas and another of the wooden boxes I bought myself. There's a story to those boxes. I'll tell you later. ;-) The penguin is old. I've had him since I was a teenager. He's basketwork from Asia. The teapot "bush" with the tiny bluebird on top is a little thing I picked up in a charity shop recently. It made me smile. The books are all reference books. 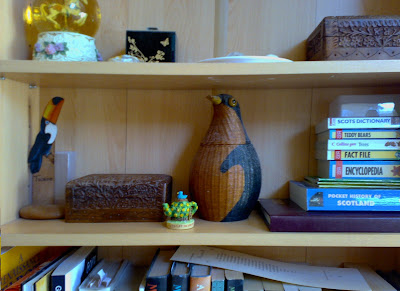 Bottom shelf - some old favourites and some new gifts.
The oldest is on the far right - "The Princess and Curdie" and "The Princess and the Goblins" which is are strange-enchanting children's books that I loved when I was little and have always wanted to reread. It was second hand when I was given it as a child. No idea how old it is. I should check.
My husband's set of Ann McCaffrey's books, which I read last year after surgery. The rest are such a mix. I just realised the big white book next to Damia is old too. It was given to me by an 80 year old lady in 2001. It's Rosicrucian astrology. The other white book next to it is an encyclopedia of fairy legends and folk tales of Europe. I've had that book since I was a teen too. There's also a book on Scottish legends in there somewhere.
Most of the other books are gifts from friends, except "Illusions" by Richard Bach, that I bought when I was 15. 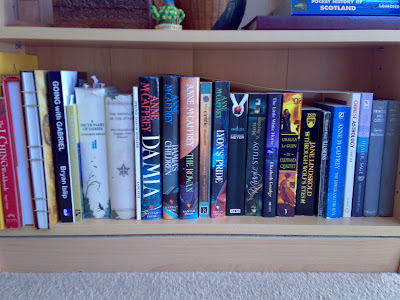 Now those wooden boxes... They are spice boxes. Made to hold cloves and other spices. I bought the middle one myself, complete with very old cloves inside. I keep my crystals and stones in them. I left the spices in as they smell so nice. 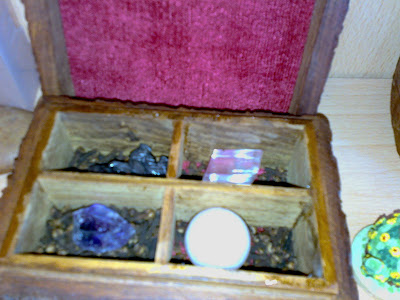 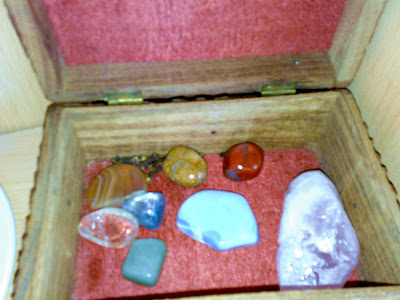 The little black box is actually made of black glass, lined with black velvet. I keep my smallest book in it - quotes about Cats. It also holds two stone hearts. Here they are, with a flint my husband found for me. You can see the saucer thing with stones next to it. There's also a chakra pendulum my parents bought me and a cute spiral another friend sent me years ago - she glued it on a gift. 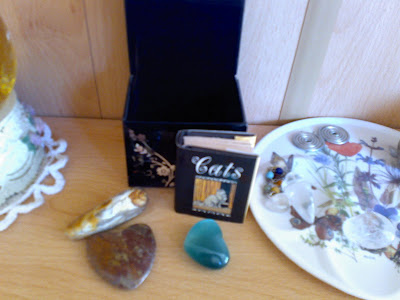 Great post, Michelle! I have a lot of books and probably a good layer of dust on my shelves! HA HA HA! I won't be posting pictures though, because they are messy and not neat and tidy like yours are.

Your heart stones are neat--very pretty!

The first thing I did was dust it! LOL Trust me, it's rarely that neat and dust free. ;-)

I really enjoyed this post too. I think one of the best ways to really get to know someone better is by having them tell you about the things they surround themselves with and why.

Thanks for link to GOTJ and also the comments you left on my blog today especially around your NHS experience.

WOW!!! LOVE your bookshelf and the intro to everything! I don't have many sentimental items, I'm afraid he he he...

Haham yep, first thing I'd to to my shelves is dust, too! I'm not at my home base at the moment, but when I am I'll post a pic of some of my bookshelves too. I like your your idea of leavoing cloves in to make the box smell nice.

Just read your comment about being up my way. One day perhaps you will have time to meet Major! Your comment was a good reminder to check out a few blogs again - I'm glad I did!

Amel
I'm sure you'll start collecting new sentimental things now you have your own home to put them in. ;-)

mariellenromer
Please come back and let me know when you post your own photos - I want to see them :-D

I'm so far behind with your posts. What stones do you have? It's hard to tell in this light. Curious minds want to know. I hope I remember to check back here to see your answer haha! Sadly, I have no bookshelves. My books are in a huge box. If I have to desert the country in a hurry, I have no idea what I'll do!

Loved this blog... Loved seeing a corner of your world and what makes you tick. Big hugs!