The Lion in the Powderpuff

I've written on my blog before about animals I've known, both wild and domestic, but I've never yet written about the animal I owned... or rather the toy poodle who owned me. Well.. at least I’m sure that was how he saw it. ;-)

I still remember the day I got him. He was such a small fuzzy blob of a pup he could fit into a slipper. He was so small we named him Pip. Amazing to think that something that small and seemingly insignificant would one day take over the entire house. This photo was taken when he was still a puppy. That's me on the far right. :-) 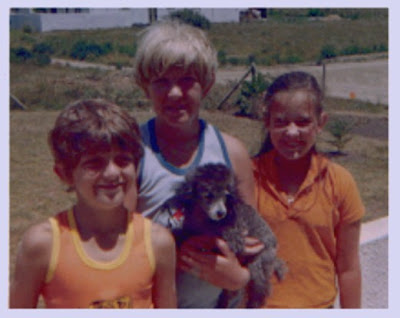 The first thing you need to know about toy poodles is they think you were invented to take care of their needs. They may learn to “sit” and even deign to do a few tricks, but basically these little guys NEVER obey unless they think it’s worth their while. As for sitting staring at you with drooling adoration the way most dogs do? In your dreams! If you want a grovelling fan and ardent admirer go for another dog breed.

Pip was the only dog I ever knew who would actually come over and pose for his photograph to be taken. He LOVED attention. This photo is a classic example of his "posing" to be photographed. Check that, "I am gorgeous" expression. ;-) 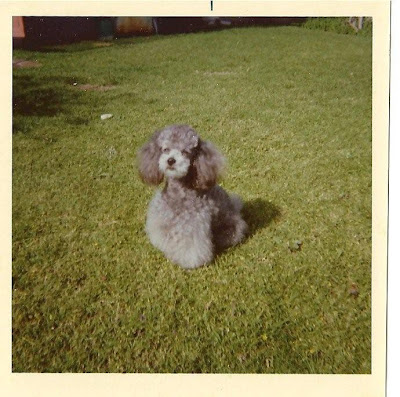 He would also come and sit in the middle of the newspaper when I tried to read it, annoyed that I was paying more attention to a stupid piece of paper than to him. Just like a cat he also loved to climb on furniture. We often came home to find our little dictator sleeping in the middle of the dining table.

Poodles are far tougher than people think. Because of their sometimes silly hair cuts we forget they started out as working dogs. Pip certainly was a lion in a powderpuff. In spite of being the size of a bread loaf he chased cats, dogs, birds and regularly bit the postman. He once attacked a rottweiler, who retaliated by throwing him around the room like a beach ball. He screamed all the way in to the vet... then sat growling at the other dogs in the vet's surgery. All he had was a bruised shoulder.

Pip was never keen on children and I was constantly having to grab him away from small kids who didn’t realise that he could leap and nip noses like a small fuzzy version of Sigourney Weaver’s Alien. He never left any damage, but it was tough apologising to mothers with screaming children.

He had another way of showing dislike which was even more embarrassing. If he really disliked a person, or dog... he'd pee on them. Although I must confess the time he peed on my dad's obnoxious arrogant ex-boss it was very satisfying. He also peed on my ex boyfriend, come to think of it... a true sign of his excellent judgement in people.


Here he is with a friend of mine he did like, doing the thing he most adored in the world - being on the beach. 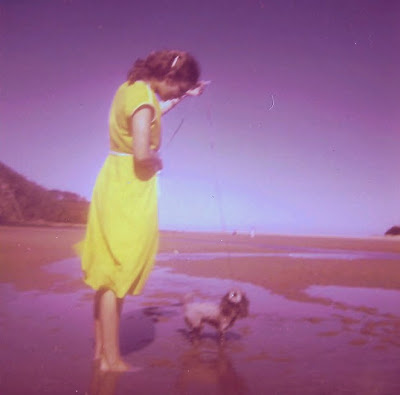 Pip died the year I turned 21. It's hard to believe it was so long ago, he was such a force of energy it didn't seem possible he would ever not be there, but his body had other ideas. He died of an unknown illness after five very brave months of injections, pills and prayers.

I loved reading about Pip, Michelle. The dog we own now, Max, is a toy poodle, and everything you say about the breed is true! Max is quite convinced that he is a big German Shepherd or some other large dog breed. He is fearless. And yes, we are all here just to serve him--so true! HA HA!

That's small dogs for ya! My son posits that God allotted a specific amount of energy for dogs. However, God didn't specify size, so, for example, Archie, our Fell Terrier and maniac terrior of the house, has the same amount of energy in his compact 20 lb muscular body that Brandy, our 102 lb Black Labrador Retriever has.

The way Archie shakes all over whenever he's excited, it's very likely possible!

Pip sounds like a real pip! I bet you do miss him. I have 3 dogs in the house, but somedays I still miss my Sheltie, Higgins who we had to put down about 12 years ago because of the pain he was in from arthritis. He was my soul partner. :o)

Daisy
Thank you. Oh my... you have a little furry dictator too? LOL They are one of a kind, aren't they? ;-) Have you photos of Max on your blog? I know I have seen a poodle somewhere, but I'm not sure if it was Max. Is he grey too?

Betty
What your son said is very true! Sandy (watching a friend's hyper-cheeky terrier one day) said, "He thinks he's a six foot dog." Since then that's become our private joke about the energy, and arrogance, levels opf dogs we meet - how tall they think they are. ;-)

Higgins was a Sheltie? The ones I've met have always seem such sweethearts. I can understand why you still miss him.

Hi Michelle. Yes, I've had pictures of Max on my blog a few times. He is a black toy poodle, but he's ten years old, so he is starting to get just a little bit of grey here and there from age. He definitely rules the roost here. HA! :)

what a lovely memory of Pip. Thanks for sharing it with us. That last photo is absolutely enchanted, very focused and intense.

Awww...what a story! I'm sorry that we never had any pics of our beloved cat. The only furry pet we've ever had in the house 'coz the cat won my Mom over. Bless all beloved pets in the world!

Hi Hayden
Looking at your adorable Jake brought back memories of Pip for me. :-)

Amel
That's a lovely prayer. Yes, bless ALL beloved pets. I'm sure there's a spot in God's heart for them.

I have just disgusted Michelle by referring to small fluffy dogs as rats on a leash. However, that rudeness aside I claim our own family's Pip. Our black toy poodle, Pierre Noire (Black Peter) was a vindicative little monster who purposely peed on my mom's new picture window drapes, because she loved them, he thought, more than him. If that were true he would have died that day. Except for that he was my mother's delight and constant companion. I prefer large dogs, however, who have nothing to prove and who have no need to be aggressive or nasty.
But you do bring back memories of a most amusing, sneaky, funny old friend. Thanks for that.