..
Hubby said something this morning that was so obvious I'd never thought about it before. He said,

"It's rather nice having one of the world's last pioneers in your family."
He was meaning my mom. You see... my mom spent her late teenage years living in the wilds of Africa between Mozambique and (then) Southern Rhodesia. Her family were the first Europeans to venture through that area. My grandfather was sent ahead by the railways, before they started work on the line that would eventually join the interior to the Mozambique coast. He took his family with him.

The whole family had some amazing (sometimes funny, sometimes scary) adventures during the years they spent living in the bush. They experienced an Africa that is ceasing to exist - a place of untouched mystery and abundant wildlife.

Here's my mom posing with a hippo skull in the middle of absolutely nowhere. 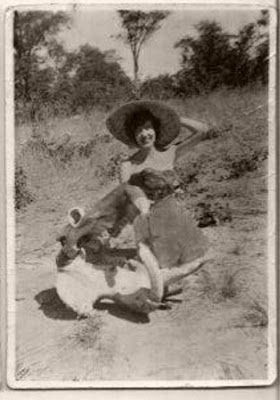 It's rather nice having one of the world's last pioneers in your family...
I hadn't thought about the "last" before. In our world of travel and exploration there are so few places left untouched and unseen. How many people can say they were the first pioneer to travel through, or live in, an unknown portion of this planet?
My mom can... and yes, that really is very cool. :-)
...
Posted by Michelle at 09:19

bet she has great stories!

Awesome, I can only try to imagine what it must have been like.

Hayden
She has some amazing stories, including being chased by a hippo. She's written them down and is trying to figure out what next to do with them.

Hi...how very very cool. It would be amazing to read her stories why dont you suggest a blog or does she already have one???

Random! :-) How great to see you around again.

My mom doesn't have a blog. I'll pass your idea on to her. Thank you.