The Mystery of the West Coast Trees

...
This is the story about my ongoing puzzle with the trees of the West Coast of Scotland.

glitter-graphics.com
The first time I went out to the West coast I felt that the trees were wanting me to stop... sort of "calling" me. The urge to stop was really intense, but I felt so silly I never told anyone until a friend, passing through on holiday, mentioned his own experience. He was half amused, half embarrassed, to admit he'd actually stopped out West... and hugged a tree!

He made a joke and said the trees 'made him do it.' He obviously felt a bit idiotic, so I told him that I'd felt the trees calling me too. It was a relief to realise we'd both felt the same thing in almost the exact same place.

The next time I was out that way was about a year later. Hubby was on his way to a job and I'd gone with for the drive. 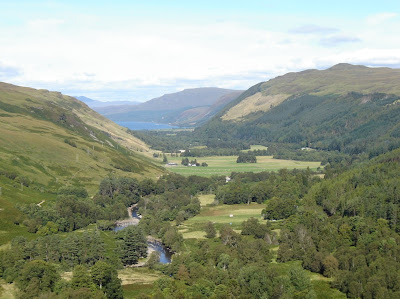 We were travelling through an area of fully grown pine forest, very near where I took this photo above, when it started. I was watching the trees zoom by when I started to hear a noise...

It was a bit like when you have ringing in your ears, but it sounded like thousands of voices singing a single note. It was a very deep "OHM" sound, like the Tibetan monks sing/chant. It was mesmerising.

As we moved from the forest into an open area the sound faded... then, as we drove through a forestry area of seedlings and young trees, a new sound started up. Only here the note was a much higher pitch, like an "aaaah" sung by a choir of schoolboys. I went online and found the exact pitch/sound. The seedling forest was like a flute playing 'A'.

It was really lovely, but over so fast and we came home a different route, so I wasn't able to see if they were willing to give a repeat performance.

We don't go out to the West Coast often, so I wasn't able to test whether these events were "one offs" or not. Then last year we took my parents on a day trip to Sky. On the way home we went more North-West, along the coast, through trees and... there it was again! That feeling that the trees were aware and calling to me.

Once again we couldn't stop. This time it was because we were on narrow windy roads with nowhere you could pull over. Very frustrating. Scotland's road department never thought of tourists! This time it was a group of big leafy trees (Beech? Not sure). I was half dozing in the car on the way home when I felt this feeling on my face, like lightest fingertip taps. I knew it was the trees showing me how wind feels in your leaves and branches. It felt nice.

Further on there were pine trees and I tried to tune in to see what wind in pine trees feels like... 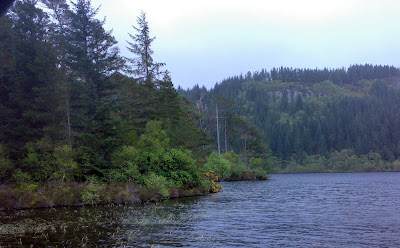 I wasn't getting anywhere with that when we turned a corner and up ahead was a huge old Scots pine. I tried to focus completely on that tree and I got his picture in my mind of birds in its branches and it was tickly! Big annoying irritating TICKLY. I felt... prickly-itchy-scratchy irritable. This tree would shake off birds like a dog shakes off water if it had the chance! It was so funny, meeting an irritable tree that doesn't like bird feet, that I nearly burst out laughing.

Why do the West coast trees seem so alive and aware? I have no idea! Hubby pointed out that the West coast is unusual in being fairly warm, thanks to the Gulf stream. There are even semi-tropical plants growing in gardens out that way. Could this be affecting the energy of the plants in some way? Or is it the other way around... maybe the West coast allows me to tune in to what is around us all the time? Maybe all trees are aware and it's us who are the ones not paying attention.

...maybe all the trees could do with a hug now and then, but we're just too busy (and too numbed by modern life) to notice. Looking forward to the day a tree talks to me!

That last photo reminds me of Jiddu (http://bit.ly/wpJiddu). Friedrich Grohe observes that another striking aspect of being in Jiddu's company was that one's perception of the beauty of Nature was more intense. An interesting experience he narrates in "Krishnamurti: 100 Years" (http://bit.ly/fsxJK100):

| Once, when walking across the Brockwood Meadows behind the "Grove", I was about to pass between a group of five tall pine trees. He caught me by the arm and said: No, around them! We must not disturb them.

Of course, you are aware that what I like most of trees has been indicated by Swami Ashokananda in A Heart Poured Out (http://amzn.to/AHeartPouredOut):

Out here, the Sacred Grove moves me: http://bit.ly/fsxtSacredGrove

That's a beautiful story and equally beautiful photos of the Sacred Grove. What amazing trees! I'm sure that if you heard thjem... they would have very wise and loving things to say. :-)

Hah! Not just Tree Huggers, but Hugger Trees! Lacking feet, you need to go to them, but sounds like they're initiating, LOL.

I'm very deeply touched by the redwoods. There are the giants in photos, but if you get away from the crowds there are trees that are nearly as big and with a much more powerful presence. (Probably because they're not hounded by as many people!) Sometimes you can walk right inside where a lightening bolt has hit and hollowed one out. Intense power. intense consciousness.

But it isn't all size, is it? Powerful trees are sometimes not much visibly different from their fellows. but you can feel it.

WOW!!! Quite an experience. I LOVE the way you describe everything as though I were there...but too bad I've never experienced such a call from the trees...maybe I should try to listen more? He he...

I love the pictures and enjoyed your narrative of going West Coast. I don't think I would like a tree that was tickly either, lol.

Trees have a wonderful way of communicating and the experience can be very vivid & enriching. I recollect going through a stretch of eucalyptus trees high in the Hills of OOTY, & just being there was overpowering

Hayden
I've seen a few medium-sized redwoods over here and they do have presence, even when small. Really lovely trees.

Thinking about what you said regarding people... I noticed that here with sacred places. Stonehenge left me feeling blank - like it was a flat battery, yet smaller places I've visited (where less tourists go) have felt very alive and intense.

Amel
I think listening to Nature is a bit like what the Bible meant with "Be still and know that I am God." We need to get our own selves out of the way first. ;-)

Vasant
I know what you mean. :-)There's a place in Africa I used to go to (rural shop) that had a small group of eucalyptus. They are such wonderful trees too.

My husband and I live in the woods and we often stop to touch the trees. We both can feel them and each has a personality. We think of them as friends and sentries in our yard, keeping us safe.