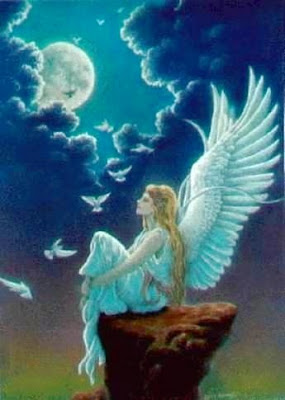 Genie asked some really great questions about my experiences of seeing angels. Rather than bury this in the replies I thought I'd start a new blog post.

What do I think about Angels? I think they are not human, nor ever were human. These are not ghosts or spirits. They are a higher energy/life force than us, but "higher" doesn't automatically mean more advanced or superior. They're just different and they do seem to watch over us, and even communicate with and protect us at times.

They have been called many things by many different cultures, but the basic concept is always the same - they are messengers and protectors who work for God. Depending on your spiritual/religious faith you could call them Higher Beings or Light Beings and change the word "God" to Creator, Source or Great Spirit or... it's all the same really.

I think the wings and body shapes are purely symbolic. It's no more than a way to convey an idea or a message. It is interesting to me how angels are shown as winged and pretty in religious Christian art. Fact is the Bible makes no reference to angels having wings... or being pretty! In fact some angels are downright scary. Angels as messengers seem to mostly look human - no wings. I'm not even sure Archangels are ever described as winged. Cherubim were described as having wings, but in their case this is multiple wings and even multiple heads! Our modern image of a cherub as a fat baby is actually based on the ancient god of love - Cupid. So Biblical angels looked either completely human or extremely inhuman. I believe the inhuman versions, such as cherubim, is simply symbolism.

The best way I can explain that is to tell another story. I mentioned in Reflections that I saw my family's angels clearer the second time around. At the time I wasn't sure if it was right to give the details of what I saw in public, but I think it might help to do so.

What I saw was very symbolic and fitted each person in my family. My dad's angel looks exactly like the angels you get on Christmas trees. Pretty, blonde, white wings. Traditional and sort of heart-warming, which fits my dad perfectly! My mom's angel I only got wings at first. Very beautiful wings marbled in black, cream and deep rose pink. Then later it opened the wings to show... a Griffin's head! My mom's guardian is a Griffin. This fits her family ancestry/history.

I first saw my guardian angel as a wolf or a dog. No wings, not even human, but always there protecting me and watching over me... and in forms I like and feel happy with - I love dogs and wolves. :-) Once in a dream I saw "him" as a man with black wings, but only very recently have the two images blurred into each other and now sometimes I see the wolf and sometimes the human figure with black wings. The black wings are for crow - a bird that has special meaning for me.

So each angel/guardian appeared in a form that each person could relate to and feel good about. But the most vivid example of how this is purely symbolic was my husband's guardian.

I saw a female wearing a golden mask. The mask changed twice and both times the symbols were things that relate very personally to my husband. I asked this angel to show me her face... and she took off the mask.

For a few seconds I saw a woman's face, but then it began to change. The face became another woman, then another - Black, White, Asian, old young, pretty, plain, even famous - I saw Cher's face in there! The faces were changing every second and grew faster until they were just a blur and that was when the angel put the mask back on.

... because they are all just masks. The faces, the wings, the body shapes are just make-believe masks. Human minds can't cope with a creature that has such a vastly different make-up to us so they create these "masks" of symbols and shapes we find easy to accept.

I also think/believe we come into contact with the human shape angels in our lives without realising it, or only realising it later. I have had an experience like that. In hospital about 15 years back a nurse came to me after my operation and told me "Don't be afraid. God is taking care of you." This male nurse was very distinctive and easy to remember. Firstly, male nurses are fairly rare and this guy was tall, well-built and very black. He looked like a Zulu. I waited to see him again, to thank him, but he never returned to my ward. Eventually I asked about him, but the doctors and nurses said no-one like that worked at the hospital. He simply did not exist.
I was completely awake when he spoke to me, admittedly I was in a lot of pain, but not to the point of hallucinating and creating big Zulu guys in Nurse uniforms! Was he an angel messenger? I like to think so.

He's not a unique story either. I've heard so many stories of people who have been helped or warned by strangers who just seem to appear and then... gone. I have no firm explanation on what they are, or why they sometimes step in to help us, but I'm glad to know they do seem to watch over us.
Posted by Michelle at 12:10

Very interesting to read about your insights and experiences!

I see similar things and regularly attend a psychic circle, it's great to know that we all share similar experiences. When I was in Cape Town working in a coffee shop, an elderly man came up to me and asked if I was Rhodesian, I said I was Zimbabwean, he said either way it's all going to be ok. I looked away, looked back, and he was gone and not to be seen again, or by anyone else in the coffee shop.

You have the gift of vision :)

Hi Shirley
Thank you for visiting me. :-) ooh, that's a nice story about the old man.

It must be really interesting attending a psychic circle. I belong to two online forums, but getting to actually meet and talk is rare.

This was a very interesting post, Michelle. Stories of angels watching over us are very comforting to me. I imagine them to be a sort of positive energy or force also.

Thank you Daisy and Amel
:-)

This makes absolutely perfect sense to me. My experience with "angels" (I call them 'the entities') was very tactile and not visual at all. I realize it's just how I perceived them, not necessarily how they really are. I felt their slim, delicate finger tips all over me. But why would they really need fingers? Fingers or no, I perceived fingers.

I've missed their presence and feel cheated that I am unaware of them anymore. My sense was that they weren't with me but that they came with many of the others who were there for that healing seminar. I never sensed them before and haven't sensed them since.

I also realize that maybe I did bring some with me that weekend, but could only sense them because of all the great energy that weekend. I keep talking to the air, asking that whatever entities might be around me to let me know they are there but so far, nothing.

Your experience sounds so wonderful and magic. I find it really interesting how some people get messages through other senses like touch (you and the fingertips) or smell (my grandfather's spirit has often been sensed by family by the smell of his tobacco)

I had more I was going to add, but now my brain has blanked out.

Michelle, if you have any advice for me on how to sense them more often, I'd be very appreciative. I believe they are there, I felt them once, I don't see why I can't feel them again. I talk to them, I ask them to let me know they're there, but so far I remain consciously unaware of their presence.

Sorry I took so long to reply. I was thinking about what you said and... I honestly can't think of an answer! If I figure out anything useful and/or intelligent to your request, I'll let you know.

Well, ask them will you?

your description of the angel taking off her mask resonated strongly. recently when I was journeying to meet some spirits I was complaining to my power animal that I couldn't "see" them, and asking for help seeing: a strange face appeared, then rapidly moved through a series of changes.. it was comical somehow and I had the sense that the spirit was playing with costumes... I complained that it made it too hard to 'see' - my guardian responded dryly that they are spirits after all, forms are a favor they give us, and was told to 'get over it.'