Time for another update on our resident rabbit. He's now fairly big and has swapped sleeping on my chives to sleeping either in a larger empty clay pot (behind the barbecue on the left) or in his absolutely favourite place... under the barbecue! 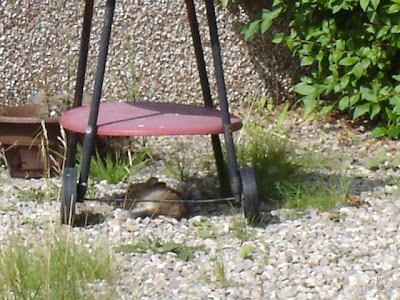 He can lie there, on his side, snoozing all day. He still hates mud and shudders when he has to lick mud off his paws and he still loves to eat my chives, but I'm afraid to say he started adding my miniature rose buds to his diet so the rose is now stacked up on bricks - too high for bunnies to reach!

He mostly loves dandelion buds and clover, but lately he's also taken to eating the dry poppy seed heads. I must admit they do look very crunchy. I've heard of poppy seeds on buns, but poppy seeds in a bun... ? ;-)

HE HE HE HE...poppy seeds in a bun sounds funny indeed! ;-D

Aw...how sweet. I love the photo of the bunny snoozing under the barbecue. Maybe the poppy seed heads made him sleepy like the field of poppies in Wizard of Oz made Dorothy and the Cowardly Lion fall asleep! ;)

I'm enjoying your blog, Michelle and I have added it to the list in the sidebar of my blogs. I hope that's OK with you. :)

Thank you! That's very kind of you. I must say I'm very glad to have found you too. I find your blog very uplifting. May I repay the compliment and add your blog to my blogroll too? :-)

Sure, Michelle! That would be great. In fact, I would be delighted if you do. Thank you. :D

Oh, isn't it sweet to have bunnies lying in your yard? My kids would love that.

I imagine he feels quite safe under that bbq pit! Of course, he's delusional, but as long as he feels safe then so what? A little bunny with onion breath, that's just funny. Chives and poppies do go together so well, smart bunny.

I think that maybe we will have to make you an honorary blogging buckeye.

"A little bunny with onion breath" LOL I can just imagine that, Genie. :-D

Ohio is known as the Buckeye State. A buckeye is also known as a horse chestnut.

The nickname for the Ohio State University sports teams is Buckeyes.

Daisy and I are both from Ohio and I once told her that we are part of the Buckeye Baby Boomer Blogging Buddies, as the Ohio presence on our blogrolls are increasing.

Maybe it's just me, but looking at the pic of the bunny under the BBQ and reading about the smorgasbord the bunny has in your back yard, well, I'm thinking that maybe life's just way too good for this rabbit...

You need to make the odd loud noise to scare it a bit, just so it can realize how good it has it! LOL

Oh, and you'd better plant some mint to counteract the chives...just in case opportunity knocks and he finds himself on a date...he can't be having chive breath... ;)