...
This photo meme is from Daisy, of Dancing with Daisy.
The rules are:
1. Open your first photo folder and scroll down to your 10th photo.
2. Post the photo and the story behind it.
3. Tag 5 people to play along. 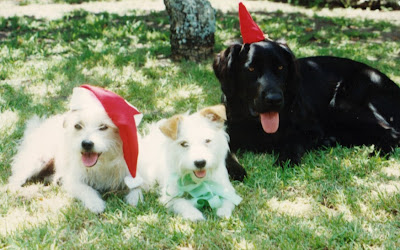 This photo was taken on a hot December day in Africa in the 1990s. The three dogs aren't mine. They belonged to neighbours who never knew their three little "angels" (hah!) used to jump the wall and spend their days lying on my parents' front lawn. We finally managed to figure out which house they were escaping from and let their owners know.

All three girls were rescue dogs. The ever-greedy incredibly cheeky Piglet was actually the oldest. Piglet gained her second name by leaping onto a table before a party and guzzling three trays of party snacks within seconds. Black Dog was given a real name, but refused to answer to anything but "black dog" for some unknown reason. She looks like a lab in this photo, but upright she was lean and long, more like a setter. Black dog was still a puppy/teen. in this photo. She had this daft habit of standing on your feet and then leaning against you until you unbalanced and fell over. Patches was the lady of the bunch. Always cheerful, never a problem and a great lover of a saucer of warm milky tea.

I took this photo for their owners, as a Christmas card joke. It took me about three hours of sweaty hot doggy madness to create this moment of angelic festive peace. Piglet was incredibly jealous of the hats and bows and ripped them off the other dogs each time I put them on. Black Dog wanted to chew EVERYTHING, including me. Only darling Patches was a true model, willing to pose and look perfect. :-)

Like Daisy I'm not tagging anyone specifically. If you would like to take up this challenge and post this meme on your blog, you are now officially tagged ...but do please let me know so I can come over to look at your photos. :-)
...
Posted by Michelle at 09:53

AWWWWW...LOVE the photo and the story behind it hi hi hi...:-D

HA HA HA! Such a cute photo, Michelle! I love it. I really enjoyed the story behind it too. I'm glad you decided to play along with this one. Nice post. :)

great photo and better story. Such a gleam in Patches' eyes!

Fun picture, lucky you could get the dogs to sit still long enough. I know my cats wouldn't sit for 5 seconds let alone long enough to get the picture taken.

Daisy
It was a nice meme and I'm glad I found it on your blog.

Hi Lu
They were so cute... and so NAUGHTY.

Bill
Hah! That photo took me hours of running around the yard retrieving chewed hats and bows and getting licked, jumped on... they only look peaceful because they're tired out! But it was worth it. :-) It made a wonderful Christmas card that year.