...
Bunny Boy is back in the garden and has once again setting out his favourite snooze spots. Photos taken from the kitchen window tend to produce a small bunny blob, but at least it gives readers an idea of Bunny Boy's territory. 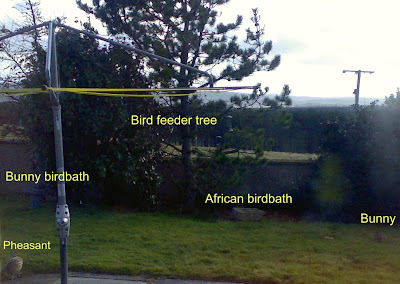 "Bunny Birdbath" is a concrete birdbath shaped a bit like a mushroom. BB (Bunny Boy) likes to sleep with his back up against that birdbath, especially on windy or rainy days. On sunny days he sleeps in a hollow in the grass... where he is in this photo on the right.

In between his two snooze spots lies bird territory. The tree and African birdbath belong to all the small birds and the grass in front belongs to the big birds. There was a female pheasant in the garden when I took the photo, so I labelled her as well. :-) The African birdbath is actually a grinding stone - for grinding grain. It has been in our family for three generations.

The little birds get seed in feeder tubes in the tree. For the crows I put food left overs and bread out on the grass. The seagulls usually try to get there first to gobble everything, so the crows have figured a plan. They grab the bread... and bury it! They either hide it in our garden under leaves or bushes, or they take it into the farm fields and literally bury it in the fields.
When the bread is dry the crows bring it back to dunk in the bird baths. They prefer their food moist. Smart birds, crows. ;-)

Well... this Saturday I'm standing in the kitchen watching BB sleep against his birdbath when suddenly he goes stiff... stares behind him. There on the wall is a crow, GLARING at BB. For a while they just sat there staring each other down. I'd never seen that happen before.

The crow hopped down and started walking towards BB, but BB did the macho-bunny thing of staring him down... till the last moment. Crows are big birds with sharp beaks. At the very last moment, just before he was in beak range, BB took a big leap sideways, then stretched and yawned... with his fuzzy tail facing the crow! As if he was saying, "I'll get out of your way, but I'll put my rear in your face." I think the message was clear?

Crow dashed over to the birdbath... and pulled out a bread slice! That was why the crow was so edgy - BB had been lying sleeping on some stashed crow bread. Once the crow had his lunch he was happy and BB returned to sleeping.

glitter-graphics.com
I've heard of toasted bread and warm buns, but bread warmed by a bun... ? I bet Bunny warmed bread is tastier than cold bread straight out the ground.
...
Posted by Michelle at 10:33

LOL love Bun telling Crow "Kiss my, buns" You paint such lovely pictures with your words :)

Thank you. :-) BB was so obviously being... Cheeky (lol) that it made me burst out laughing.

AWWWWWWWWWWW...what a story!!! I can't stop smiling here he he he he...

Funny story and I bet it was a bit scary to watch the crow looking as if he might to to attack your bunny.

what a wonderful drama playing out in your back yard! I'm not at all close to the 'do-ings' here yet. It's such a FARM. everything flat and empty, no bushes or trees (except for the orchard, of course.)

There are a lot of kill-deers now, and red-winged blackbirds, but I'm only beginning to get to know them.

HA HA HA! What a cute story, Michelle! I never heard of crows burying bread before. What is even funnier is that here locally they sell a kind of bread with the brand name of Bunny Bread, which I couldn't help but think of at the end of your post. HA! :D

Hi Elizabeth
Yes, I do worry over him. That is the hardest part - the fact Bunny Boy is wild. Even though he ignores us utterly and has been known to peek in the windows he still is wild. His first year he was ill or injured and spent weeks just lying in the garden looking miserable. I so wanted to grab him up and ake him to a vet, but the stress of so much human contact would have probably killed him.

I so want to give him a cuddle!

Hi Hayden
When we first moved into this house it was really depressing. Our other house had all sorts of wild creatures, lots of birds. This area has fewer trees and at first we had no birds and only the rabbits. It took months of putting out food to draw in the birds. We still don't have as many wild animal as the old place, but bunny makes up for that. lol

Hi Daisy
The first time I saw the crows burying their bread I couldn't believe my eyes.

Bunny bread? Oh that it too funny! :-D

I forgot to add that BB likes to eat bread himself, but only brown bread. Unlike the crows he has a discerning palate. ;-)

I know it takes time to attract them (sigh). This first couple of years my focus has to be planting. Windbreaks, hedgerows, a full season of wild bloom for the pollinators. As the land becomes healthier it will draw them. I know there are quail in the orchard, too. I've flushed them. No mistake that the orchard has the most life: trees planted too close for my BIL's mower, plus the shelter provided by the trees themselves makes the orchard much more hospitable than the rest.

I must have patience.

Still, I envy your cast of characters!