The Game of Life

Yesterday a friend asked me a question and to answer her I had to go back and looked through my old journal. I have one where I write my dreams and any other interesting experiences. On the first page for 2004 there was an adventure I'd completely forgotten - an attempt at "journeying", to meet my totem animal/s (when I was more into shamanism than I am nowadays).

Now... I'm not a purist and big explanations just confuse my brain, so here's my own very personal explanation of that term. For me Journeying is something between meditation, imagination and lucid dreaming. Sometimes it works... sometimes it doesn't.

On this particular Spring day in 2004 it did work. I did meet a whole bunch of critters, but what I'd forgotten was what else had happened during my adventure.

I had walked into the courtyard of a big castle and there, sitting on the edge of a well, was an old man with a long white beard. He was playing tic tac toe (a game I hate), drawing on the stone with pieces of chalk or charcoal. 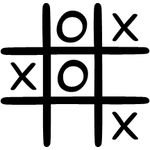 
He gestured to me to join him and I realised I was in a position to win the game. So I drew an X... but he drew a daisy!


The closer I got to winning... the more he messed it up with his doodles. I started to get fed up and angry, but he just LAUGHED. The more he laughed, the more I wanted to laugh too and then I finally got it...


and I drew a star

instead of a X.

I realised the game wasn't about winning or keeping to the rules - it was about being imaginative and having fun. Then we were off playing game after game drawing all sorts of silly doodles and laughing ourselves silly.

It took me till this day (six years later) to remember and realise the bigger point to that experience. First of all... I didn't realise back then who the old man was. I only "met" him a few years later as my jolly naughty old man Spirit Guide, Sol.

And I now can see how the game is really THE Game...

But everyday life can spiral downhill fast with all our "serious adult responsibilities" and we forget that playing a game means just that - PLAYING.

The Game of Life is yours to do what you like with - have fun, experiment... break the rules. Draw daisies instead of 0s and kittens for Xs! There are no rules, except those limitations we create ourselves. We knew it as children. Heck, even Jesus knew that children knew! That's why He told everyone that you needed to be like a child in order to play the Game right.


So this morning I went and replied to that friend and then I decided to write my experience up here on my blog. In between I stopped by Facebook for a quick coffee break and browse. I found another friend had left me another playful link I'd forgotten - A Whack on the Side of the Head, on the website of the brilliant Roger von Oech.

So, just for fun, I went and picked a card for my daily whack. I got...

Here's what the website has to say about this card.


According to Heraclitus, creative mastery comes from having an attitude similar to a child playing a game. If you can playfully “push and move” the various pieces of your problem — to see what works and what doesn’t — then you possess the power to create something new.
An important by-product of play is fun, and it is a very powerful motivator.
For example, Rosalind Franklin, the scientist whose crystallography research was instrumental in the discovery of the structure of DNA, was asked what motivated her. She replied, “Because our work is so much fun!”
Similarly, Murray Gell-Mann, the physicist who coined the term quark after a line in James Joyce’s Finnegan’s Wake, was asked to comment on the names of the various types of quarks — flavor, color, charm, strange, etc. He said:
“The terms are just for fun. There’s no particular reason to use pompous names. One might as well be playful.”
Finally, the renowned chair designer Bill Stumpf was once asked what criteria he used to select new projects. He responded:
“There are three things I look for in my work: I hope to learn something, I want to make some money, and I’d like to have some fun.
If the project doesn’t have the promise of satisfying at least two of these, then I don’t sign on.”

Today I wish you all more play-time, more imagination and lots more...

Great post! Love that journey wisdom, very cool. I've been getting otter a lot lately, among other reminders to lighten up, have fun.

And am trying to remember.

Love the 3-pointer: fun/money/learn. It's a great guide to how to select among ways of spending your time!

I was thinking the same about the fun/money/lesson thing too. What a great way to make sure you're doing what is best for you. :-)

Ooooh, otter. I love otter - totally brilliant at reminding us to lighten up.

Books, by definition or description tend to be about something specific. Doing criticism of literature in college made me want to vomit and killed my desire to write. These sort of things you write should appear in booklike form without being anything that a book is expected to be. I think you should collect up things and throw together new fun things just for the joy of it.

den, my dear friend, if I could think of a way to make a book and do the fun/lesson and MONEY thing... I'd do it in a flash!

My brain has tried to put these things together, but all I end up with is something like a verbal compost heap. I need an editor more than I need joy.

Thank you for believing in me way more than I believe in myself. XX

you raise many good points. I think that humor is a very powerful thing, and it's interesting how you were upset b/c he didn't draw x or o, but the laughing defused the situation. & I think it is cool how you understood what the game was actually about & how you had fun thereafter.
It also does take unconventional thought to solve problems/deal w/ life. I sometimes think like that to solve problems that I encounter. & sometimes it actually works. :)

LLLUUURRVVEEE this post, M! I'm having FUN just by reading it he he he he he...:-D

Thank you Vince and Amel :-)