I'm bringing back an idea I had years ago of something thought-provoking for "thoughtful thursday". Feel free to join in, but let me know so I can read your blog post, please.


It's hard to read my emails lately and not end up feeling either depressed or frustrated. It can be summed up by a poster an American friend sent me. Just change the "it's good for.." country's name to Australia, Great Britain or Canada (yep, even Canada now has people in employment having to use food banks due to rising prices and low wages).

And be aware that by "farmers" most countries do not mean your local small farms, but more your "big business" mass-producing farms. 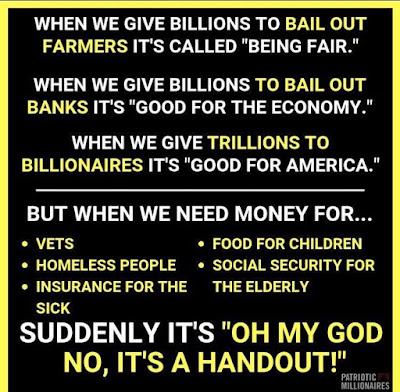 I'm still constantly taken aback by this short-sightedness of extreme greed. Too many politicians  think the top three on this list bring in money and the base group do not...

But it is the much larger base group who use the banks and buy the farmers produce. Without a stable middle class, everything falls apart.

It's obvious, it doesn't take much of a brain to figure it out, and yet way too many world governments are so thick they can't realise it. A healthy, well-fed and homed society ADDS to productivity and the national economy. More poor makes the whole country more poor. A small top layer of super wealthy cannot keep an entire country's economy afloat.

And they keep making this same mistake over and over... even though the shops and factories are closing, the houses are being taken back by banks who then cannot sell them and the amount of homeless keeps growing.

If I were to add a prayer here, it would be to ask our world leaders to realise how stupid they are being.