Time to Listen to Your Self

A friend recently quoted Machiavelli to comment on the lack of hope in the world, how history seems doomed to repeat itself. It was a very valid point. When I watch world news, I see only tragedy and failure across the entire planet. I think we can agree that many of our world leaders (big business and politics) are seriously lacking in common sense and true commitment to the people they started off promising to serve.

I think this problem is because it is often the most sociopathic layer of humanity that is drawn to positions of power whilst the decent folk head for medicine, science, charitable services, etc, etc. I've often thought that if we made politics a vocation or career that paid very little, similar to teaching, we'd see a vastly better world.

The men and women we set up on pedestals are often those that show the worst traits. Humans are too trusting, which perhaps lies in the fact that humans are not encouraged to look, listen and discern for themselves. Right from the first day of school they are told to sit down, shut up and take orders. Is it then any surprise that humanity is so clueless in who they admire and trust?

Humanity mistakes recklessness for courage, vanity for power and overblown ego for assertiveness. And worst of all ... we seem to never learn from history, but I think it's more that our leaders don't want us to learn. The game works for them. The top layer stays rich, regardless of whether they are Left or Right in the political spectrum. 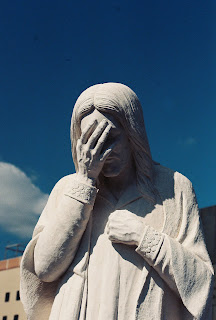 The only way we'll ever change that, in my opinion, is by moving away from trusting leaders and becoming our own leaders. Ironic thing is that Jesus preached this message in a way, before the churches squashed his predictions of human spiritual evolution like a bug.
Bear with me here, this may seem like a digression, but politics and religions are often very much alike. In the case of Christianity, Jesus took a scary warrior God (Yahweh was the Canaanite god of war) and made him a "daddy" (The actual word he used in the Lord's prayer is daddy, not father). Then Jesus took it a step further and said the Holy Spirit would take over. Complete human autonomy - you now are your own temple. You have the higher conscience (holy spirit) to make your own decisions. You are responsible for your self.... but that was no use to early Church leaders who wanted control, so they took Hel and Hades from the pagans and create fear in order to keep everyone in line...

So easy to make people do the most insane or appalling things if you use that cocktail of commands on them. Politicians and dictators use the exact same tactics.

I think we need to become more responsible as individuals before we'll ever move forward and change our "rinse and repeat" history pattern of war and disasters. Jesus agreed, stating that he was leaving and the Holy Spirit would take over. For the atheists out there, I'd say this is that little voice some call conscience. Or even maybe... the voice of our True Selves? You know it, it's that small voice at the back of your mind that whispers, "this is wrong" or "There has to be another way."

I do believe we can do anything if we stop listening to bullies using fear and hate to control us and focus instead on hearing our true selves.
Posted by Michelle at 12:53