This post was triggered by a friend, who wrote saying she'd have to cut her email short because her husband had just brought her lunch. And in that moment a whole realisation flashed into my head about the untold stories of the courage of men.

Now you might think that books and movies make a big deal about courage. In a way they do,  but it's only specific types of courage they tend to focus upon. Most movies portray courage in action - the warriors, the soldiers, the superheroes. They rarely portray the courage of those who endure; those who stand and stay. There's no denying the courage of the soldier or the warrior, to face death and pain takes immense courage, but action is in itself a release from fear and a way to cope. It's a courage fuelled by nature itself - adrenalin pumps, the heart pounds blood to muscle and the senses quicken. To react, in fight or flight, is instinctively easier.

Years ago a woman I met told me this story. She told me of the time she'd woken up in a hospital bed to find her doctor had unhappy news. It wasn't terminal, but it would change her life forever. After explaining everything carefully the doctor left her and her husband alone. Her husband kissed her and told her everything would be just fine... then he walked out the hospital, went home and packed a bag and was never seen again. He didn't have the courage to endure, the terror of staying was too great and once he started running he could not stop.

And sadly there are many men who run from these kind of fears, either literally or by escaping into alcohol, etc. Women do it too, but on the whole there seem to be more men who struggle to endure long term courage situations. I suspect it's because men aren't always taught the courage of standing and staying. they're taught how to react - to fight or fix the problem. Our modern obsession with violent action games and movies seems to prove the point.

Now, I'm not trying to diminish the glory of those genuine heroes who save lives and take great risks to protect others, they deserve all the credit they get. 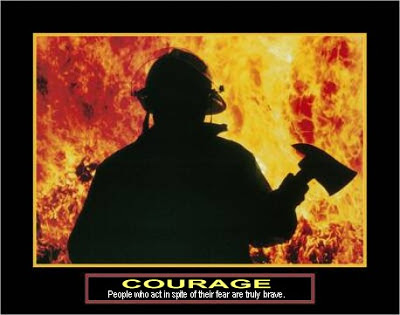 What I'm more interested in doing today is adding more awareness about the courage of those who keep on keeping on for months, years and lifetimes. For the fathers, husbands, brothers and sons who, in times of sickness and hardship, act as the anchors and the safety nets. They cook meals and clean houses, they sit beside beds, take care of children, act as a taxi service, wait in waiting rooms, wash the weak and hold the dying.

They are my heroes. 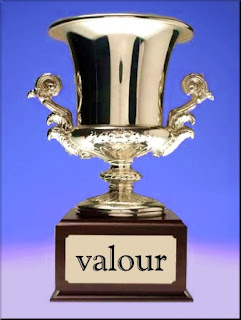 Finishing with one of my favourite songs. It was the theme to the movie GLADIATOR, but I think it feels like the perfect music for every kind of hero.