Russell Crow... the One that got away

A month before my soon-to-be husband came out to Africa to marry me someone new came into my life. It truly was a whirlwind romance and completely unexpected. I've often told my husband how lucky he is, because when Russell Crow made his proposal... I was tempted! Sometimes I pull out the photos and think how different my life would be now, if I'd just accepted that twig...

We went to bed as normal, but woke up to find this stranger in our back yard. We had no idea how he got there, but it was clear, from the first moment, that we were in the presence of someone of importance. We had chickens when I was a kid and I knew enough to know he was a bantam. He was also sporting some very stylish speckled and striped feathers. The moment he saw us watching he lifted his head and crowed his tiny lungs out, proclaiming how important he knew himself to be... and that's how he got the name Russell Crow.

Bantams are a unique group of fowl folk, naturally tiny and spunky, but this one was more than that - he had style. The first thing Russell did, after crowing his status, was walk past us and into our house. Yes, we did try to shoo him outside, but he made it very clear (with screaming, flapping, feather-dropping hysteria) that he was NEVER going outside again. We figured he must be a scared lost pet, so we left him pottering around the lounge and started a door-to-door search for his owners.

For three days we tried to find out who Russell belonged to without any luck. During that time he took over entirely. He'd spend the day trying to eat the pattern off the carpet, or clucking gently over some interesting crumb in the kitchen and each night he'd fly up to his favourite roosting spot, on the shelf of an antique piece of furniture of course! 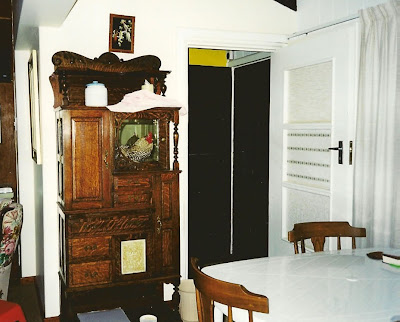 Every night we'd cover him with an old towel, or he'd be crowing his head off at 4:00 am when the sun rose. 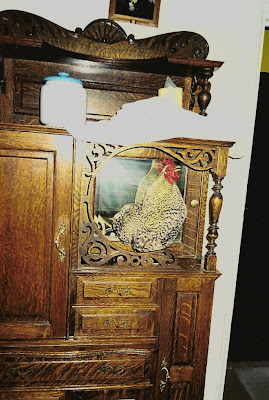 Russell decided that the only human worthy of his attention was - me. I'm not sure exactly why I was "the one", but I suspect it was my caftan. In the mornings I wore a caftan, instead of a dressing gown. It was covered in big splotches of bright colours and Russell was mesmerised by it. He'd follow me around, head to one side, cooing gently, his eyes never leaving my colourful caftan. Perhaps he was overwhelmed by "feathers" even brighter than his own. Whatever the case, Russell was in love.

He started showing his affection by becoming protective; anyone coming near me would get firmly kicked. Since Russel was barely calf high this wasn't exactly terrifying and the resulting laughter would really fluff his feathers in outrage. He knew there was only one other way to impress me and make me his... he started bringing me nesting material. That meant overcoming his fear and going out into the garden, where he'd bring me twigs, with gentle crooning serenades and formal head bobbing. Russell knew how to treat a lady!

The day we finally found his real owners was a sad day, I must admit I'd rather fallen for Russell's crooning charm. His owners told us that they had owned two bantams - Russell and another young male. On the night he came to us a stray dog had leaped the fence and killed the other bantam. Russell had escaped by flying over the fence, but in his panic he'd fled several streets, which is why it took us so long to find his owners. The good news from this sad story was that the owners decided to purchase two new bantam hens to be Russell's new companions. He lost a giant gaudy girlfriend and gained two new wives... I'm sure he was happy with that. ;-)
...
Posted by Michelle at 09:33

Oh, you seductive wench, you! LOL Poor Russell didn't know he'd fallen for a Crow, did he?

Such a sad, sweet story! I'm glad you found his family again, but I can see how hard it would have been to let him go!

There is just something about you, Michelle, and I suspect it's less about your caftan and more about your wonderful energy.

What an entertaining story. You must have looked like a huge colourful crow! Such a sweet ending :-)

what a great tale!

Betty
LOL He was so darn cute.

Genie
Thank you for such a nice thought. :-) I really missed him when he went back. He was such a character. If we ever get to own our own place I'd love to keep bantams.

Ting
I still have the caftan and it is BRIGHT (red, yellow and purple), I must have looked amazing to him. :-D

Hayden
THanks. I enjoyed retelling it. I hadn't realised, until I was going through old photos, how many birds have passed through my life. I'm definitely a birdy person. LOL

HE HE HE HE HE...this is such a funny story. But I think our family is rather cruel since we bought a small chick and grew him and then we ate him hi hi hi...

I love your story about Russell Crow. Our own Miss Chicky comes regularly into the house if the screen door is mistakenly left ajar. She is a huge Brahma - not a bantam.

ha! That's some story. My dad's family had chickens when he was a boy and they ate them too.

Terry
I never thought of myself as a chicken lover (except crispy and golden) until I met Russell. I still love his bretheren with gravy, but I must admit he did make me realise chickens could have character.

"Never thought of myself as a chicken lover (except crispy and golden)..." LOL!

My daughters and I loved your story! It is funny how those little fowl friends can give such love. They have an ability fill a little place in your heart in such a way no other animal can.

Thank you for sharing it.

That's an awesome story! It reminds of when we had a pet cockatoo. Many of the same behaviors you described brought me back down "memory lane". That cockatoo was the best pet I ever had!
I love the part about Russel being protective & bringing you twigs. :)

For some reason blogger isn't updating me on all replies, just random ones. In other words I only found these replies now. :-|

Imp
I'm glad you all enjoyed the story of Russel. Looking back at my life I've realised there's been birdy friends all the way... no wonder I'm drawn to crow? LOL

Vince
Thank you for the kind praise. :-) My cousin had a cockatoo, he was wonderful. It's amazing what unique little personalities birds can be.