Nature
Entertainment
Wise words
Spirit
Family
Lessons
Author
Smiles
Health
NATURE
June was glorious, hot and sunny. So far July has been the complete opposite. I took the photos below in June on a perfect summer evening. We had parked here for a specific reason, which you'll find out by reading on further. ;-)
First photo is of barley fields beside the road... 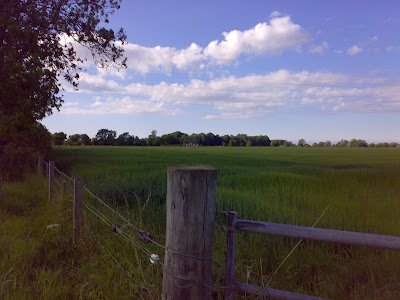 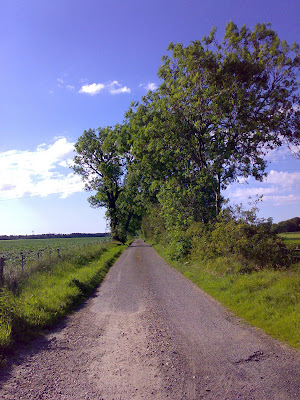 ...and some pretty wild flowers growing beside the road. No idea what they were. 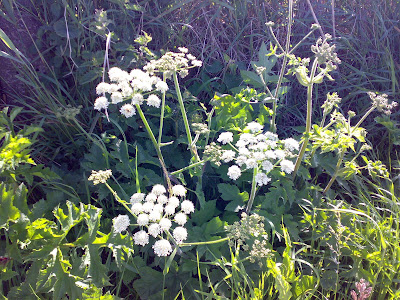 ENTERTAINMENT
The reason we were parked out in the countryside on a warm June evening was because the Red Arrows were in town for the day. They came to give a show for Kinloss Airbase's 70th Anniversary. We all took loads of photos, but very few do these wonderful pilots justice. Where we were parked they flew over these fields in front of us. 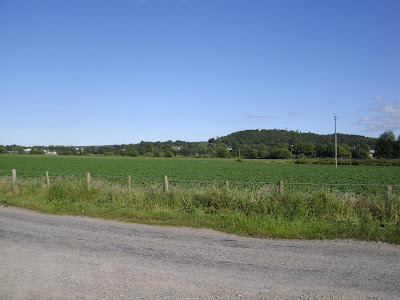 Here's a pretty one of them in the sunlight. 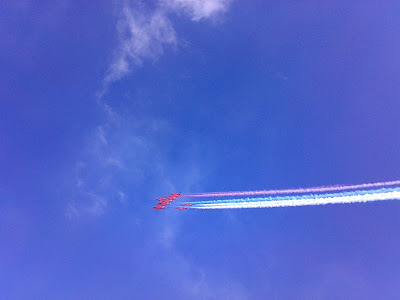 Two of them criss-crossing... 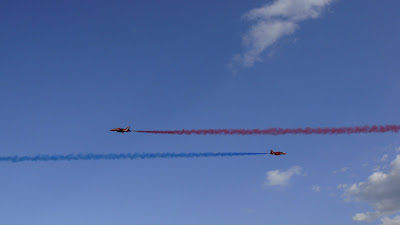 Braiding colours in the sky... 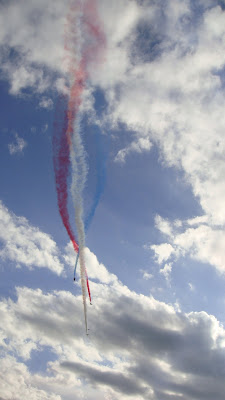 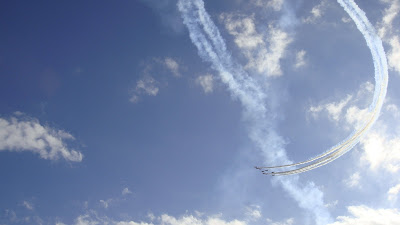 Near the end three of them formed a heart with an arrow through it. It was so big it filled the entire sky. 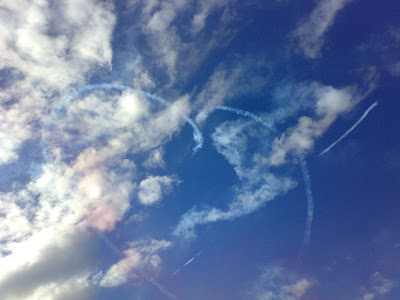 They also did a starburst over our heads... 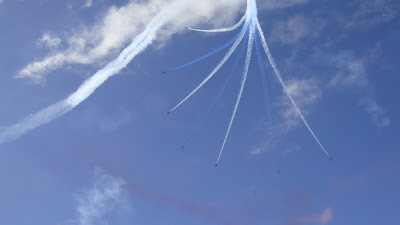 The noise was incredible. It was very exciting. My dad took some videos, but I need to edit them before posting. Edit because dad forgot that while planes can loop 360 degrees humans holding cameras can't. He lost his balance and nearly fell over twice so most of his videos end with close-ups of the road and lots of giggling from him and me.

WISE WORDS
My favourite quote for the month, with one important twist - they have to be words from a fellow blogger. My Wise Words choice for Mid-Summer are by Tessa of An Aerial Armadillo. This delicious extract is from her gorgeous post on Zanzibar, fully illustrated with equally luscious photographs.

Like women in full purdah, each dilapidated shutter hides a story, each carved wooden door tells a tale. The island's legacy of trade hangs heavy over the market place where mangoes, tomatoes, chill is and bananas - as long and curved as Persian sabres - provide sensory relief from fly-ridden fish entrails, octopus tentacles and cow's heads.

SPIRIT
I have been working on some posts related to the topic of Faith and Manifesting. It started as one idea and kind of grew too long, so I'm busy working on making it into two posts... or three. I'm not sure if anyone is actually interested to read thoughts/ideas on those lines. If this grabs you - leave a reply here and I'll post them once they're done.
FAMILY
Family life has been quiet at the Crow's Nest. Hubby is still working hard to get his new business up and running, but things are so quiet at the moment that we're really only managing an "up and limping" at this stage.
LESSONS
June was extra hot, but that sunshine brought massive bouts of hayfever for both myself and hubby. Three solid weeks of sneezing and wheezing has left us both rather limp and exhausted. So... the biggest lesson of Mid-Summer is that beautiful meadows of wild flowers need to be watched from behind closed windows if you suffer from hayfever!

AUTHOR
My book and author for this newsflash is...

"Green Light" by Lloyd C. Douglas
Douglas is most remembered for his books "The Robe" and "The Big Fisherman."

"Green Light" is also a religious-themed book, but unlike the other two which deal with the life and times of Jesus and the Apostles, "Green Light" deals with more modern times. It's the story of a young American doctor who sacrifices almost everything (including the woman he loves) in order to save others - literally and in a more Spiritual sense. What makes the book outstanding for me are the portions where the Dean puts forward his opinions on Evolution and religion, views which are quite radical and innovative.

It's a story of love and courage in every sense of those words. It has two bitter-sweet love stories woven into the plot. Here's a quote from the book...

"The Dean says," bantered Phyllis, "that we should be more trustful of our fellow men. There's something about it in the Bible too."

"Well - the Dean never was a woman," came Sonia's reflection from deep in the clothes closet. "And the Bible was written by men - for men."

"Dare you say that to the Dean," Phyllis lounged in, tossed her hat aside, and sat on the edge of her bed.

"About the Bible? It was the Dean who told me. He says there should be at least one book in the Bible written by a woman - for women." 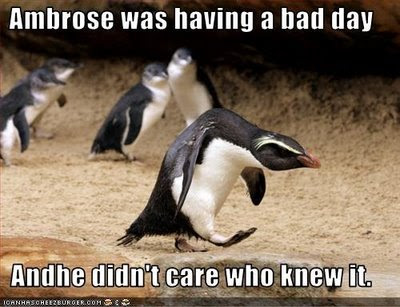 HEALTH
I finally have an appointment booked for surgery for my hernia - some time early in August. I'll be so glad to get this finally sorted. Otherwise I'm plodding along. My blood pressure went up last month after I had to deal with a stressful situation. My doctor has put me on low-level anxiety medication for it and it has helped a lot, but it seems to be making me feel drowsy.

My mom's had the most serious problems this summer. Her hip/leg has been hurting her a lot. At first it was just pain when she stood, then pain if she stood or walked, but at this stage she hurts sitting, standing, walking... there is nothing that does not hurt. Her doctor sent her for X rays last week and she should get the results soon. Prayers for good news (that this pain is easily fixed) are appreciated....
...
Posted by Michelle at 09:45

hi. i like what you did with the letters! i like your blog i'm gonna follow. the thing with the news flash is really cool and i didn't know they could make boojs that fast! the penguin's so cute! plz check out my blog writeaboutwhat.blogspot.com/

i'm hoping to hit the big 2-0 in followers by the end of august!
ta ta

it's meant to say books by the way

great posting.I hope that you are having a great!

Hi Michelle, Nice posgting. I'd be interested in reading your take on faith and manifesting. In as many parts as you ever wish. :)

Oh, I forgot. The wildflowers, well, I have no clue what they are called in English, but they are very common here in Finland. We call them (direct translation) dogtubes. There is a variation that grow up to 8 feet high and they are very poisonous. :/

Very nice photo's re the airshow. Wish I could have watched that.

"and lots of giggling from him and me."

May each day start and end with more of this. I found these the to be very happy toughts

Thank you for following and good luck with your blog. I enjoyed browsing your links and book reviews.

I got the idea for the newsflash from another blogger. It helps on days when my brain hasn't a clue what to write about. :-)

PS... the book machine is supposed to be coming to Aberdeen some time soon. I think one at Borders in Inverness would be great.

Hi Mike
Thanks for popping by. :-)

Hey Saggy person! *grin*
I'll be back with the manifesting posts.

The weed you're describing (dogtube??? GROSS name! LOL) is called Hogweed here. Hubby got the juice on himself as a kid and came out in a rash. It literally burnt his skin. Horrible plant. :-(

These flowers in my photo were tiny and not the same plant, but I will admit they look a lot alike. These were only about 20 cm high.

Hi Pete
The air show was brilliant and... the giggles were even better. :-)

I love how you put this post together! Those planes must have been a lot of fun to watch :D

I enjoyed reading this post, Michelle. That must have been great fun to see the show put on by the stunt pilots. I enjoyed the photos. I hope business picks up soon for your husband. I also hope your health and your mother's health both improve soon. Prayers going up for you both. Hugs from Daisy.

I'll remember your Mom in my prayers...it's always so painful when we know our loved ones are in pain and we can't even help. :-((((

Anyway, I'd love to read your thoughts on faith and manifestation. :-))))

Wish your surgery goes well and your health is improved!

The planes were great fun. :-)
Daisy

Thank you for the wishes and prayers.

Thank you for all the prayers and business advice and wishes. ((hug)))

I will be back with the manifestation posts. :-) I'll let you know whwen I post them, as I know you're pretty busy too.