This July, we took a visiting friend to some magical places.Our first stop was Clava Cairns. Even though the cairns are ancient burial chambers this is a happy mysterious place. We've been there at virtually every time of the year and the area always has a lovely peaceful vibe. 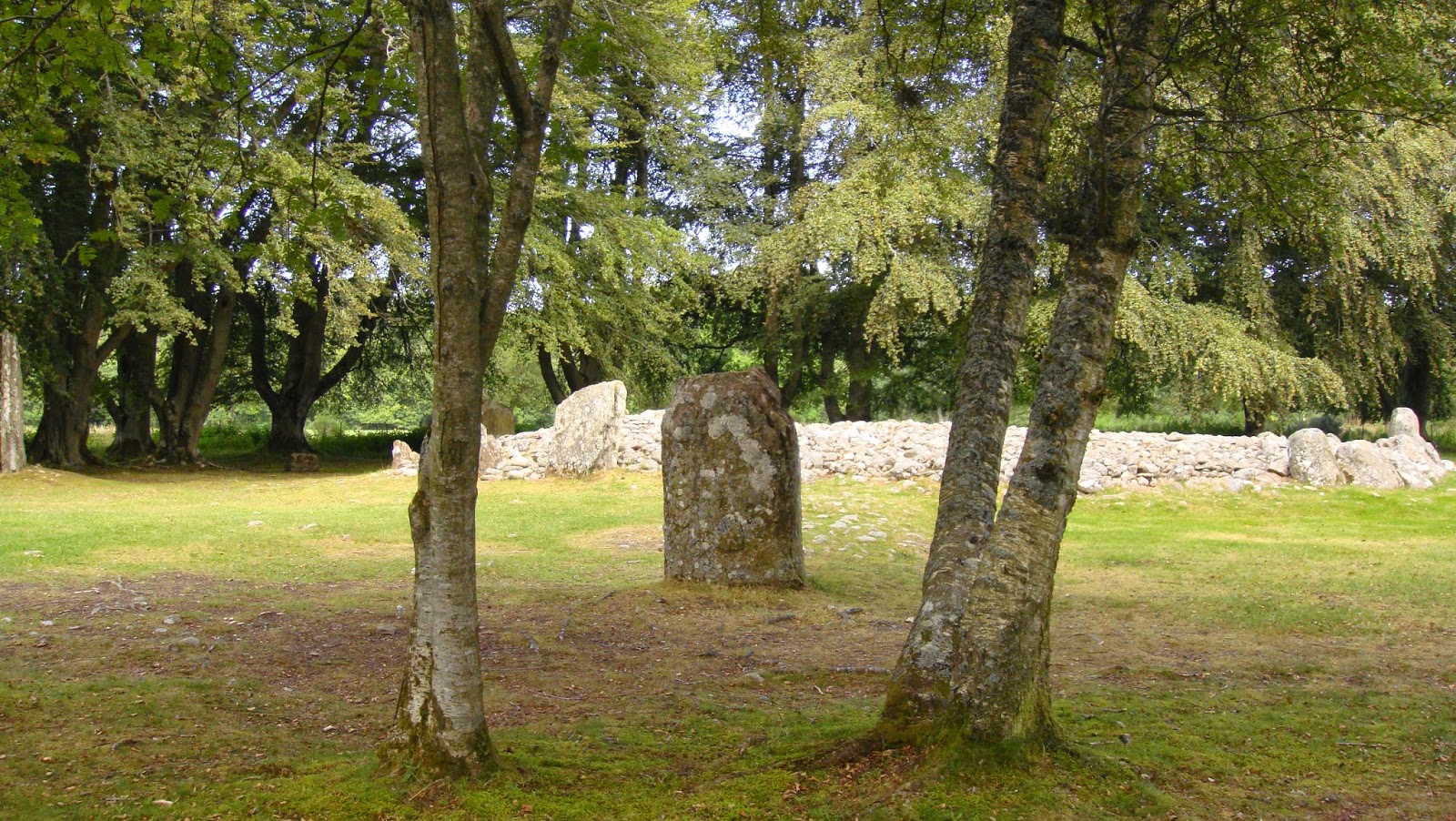 There are three main cairns, set in woodland. Each one is surrounded by a ring of standing stones. There are four more covered cairns in the surrounding farmland and other standing stones in the fields that could form a walkway or markers. 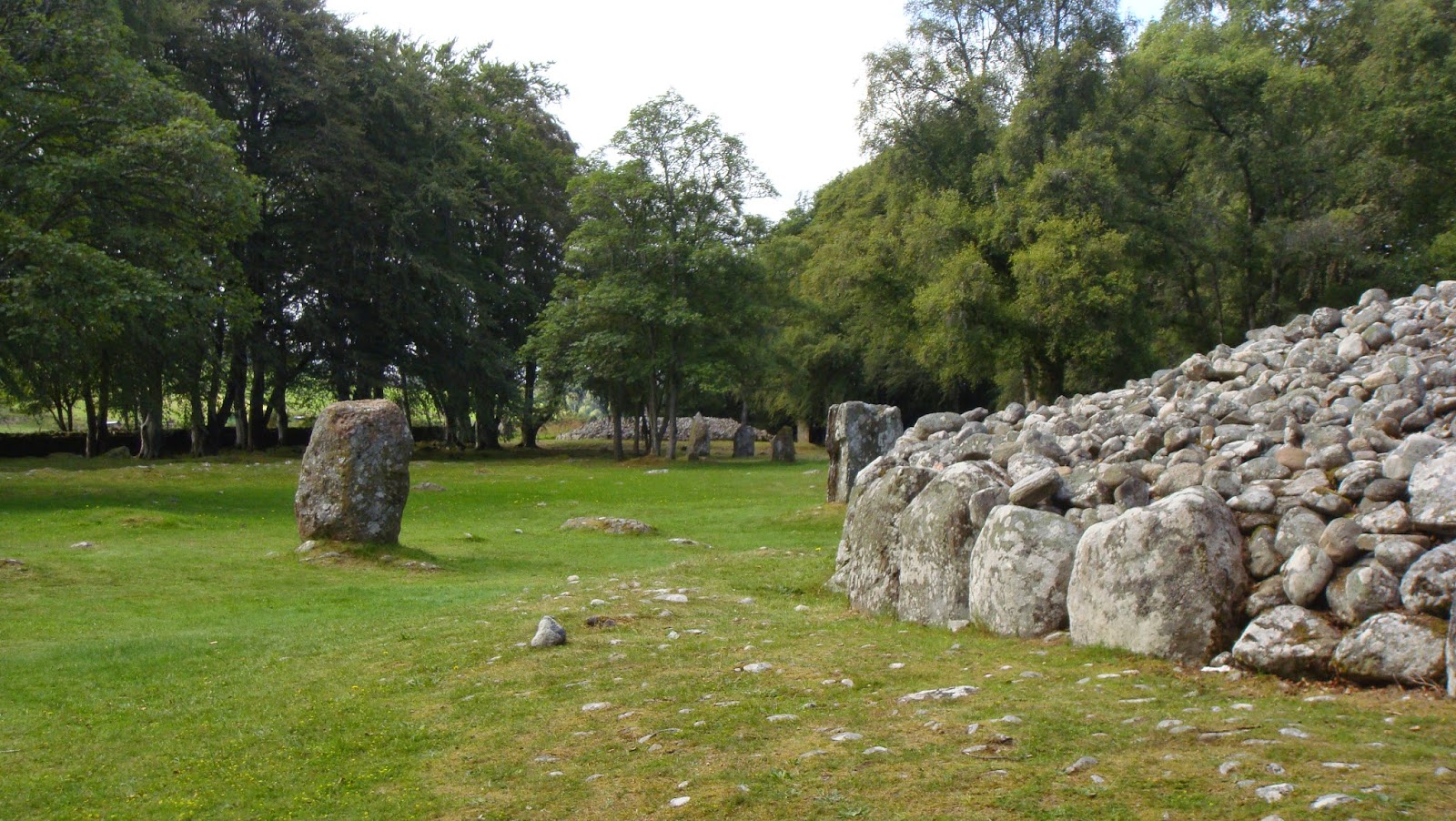 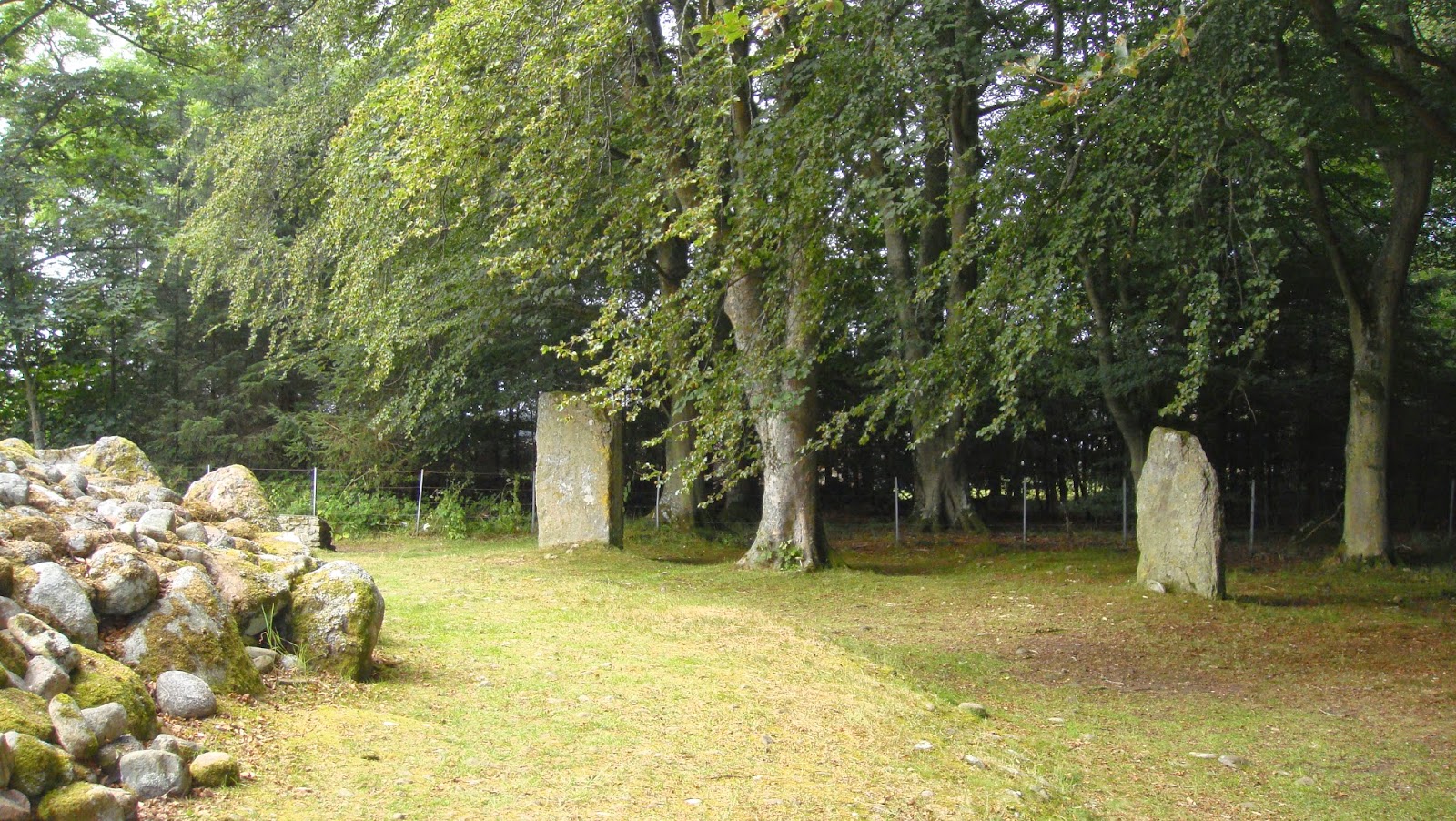 This chamber entrance is directly aligned with the midwinter sunset, same as Maes Howe in Orkney. The standing stones also align with the Winter Solstice. 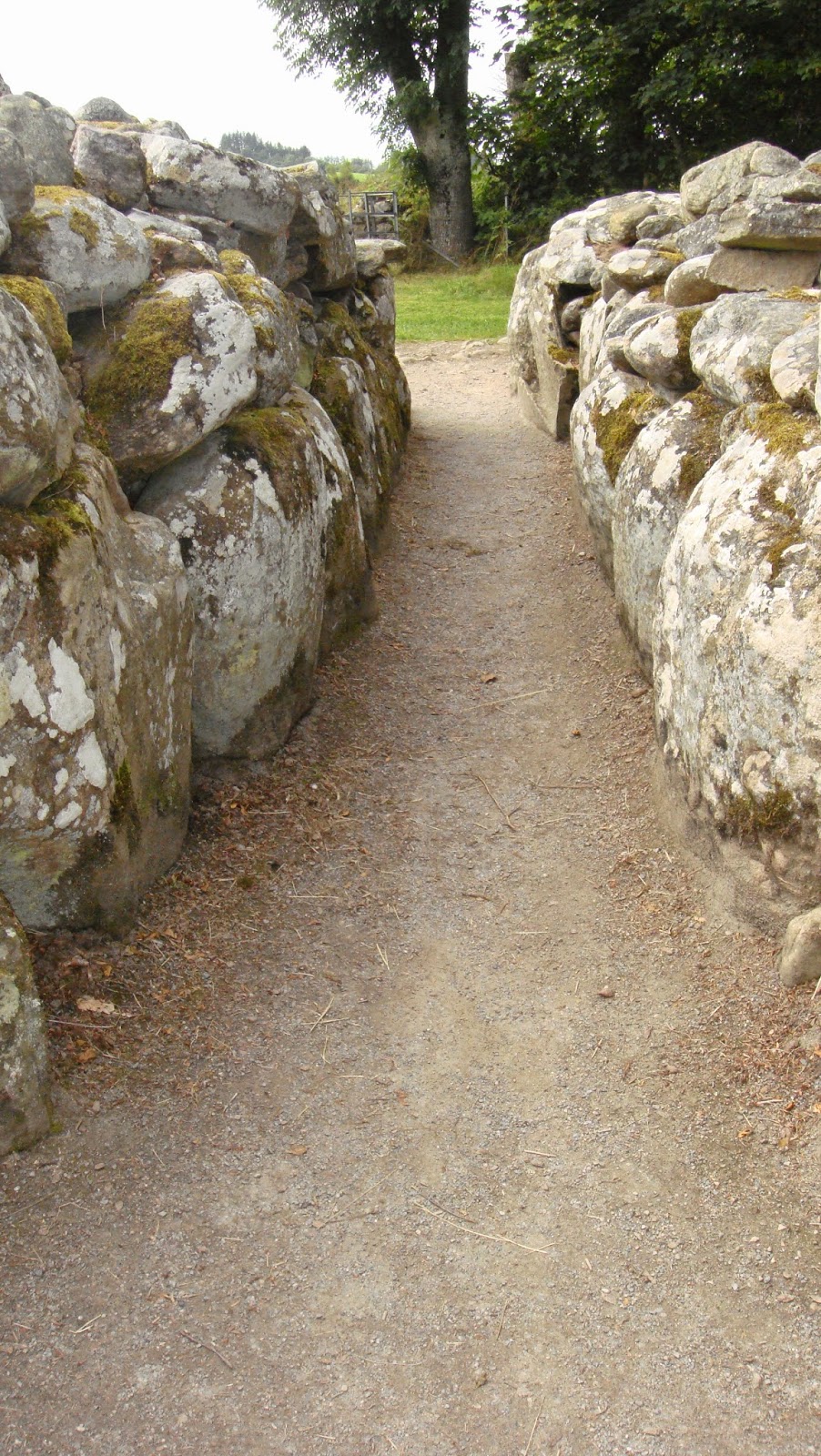 The cairns also have  cup and ring mark stones. 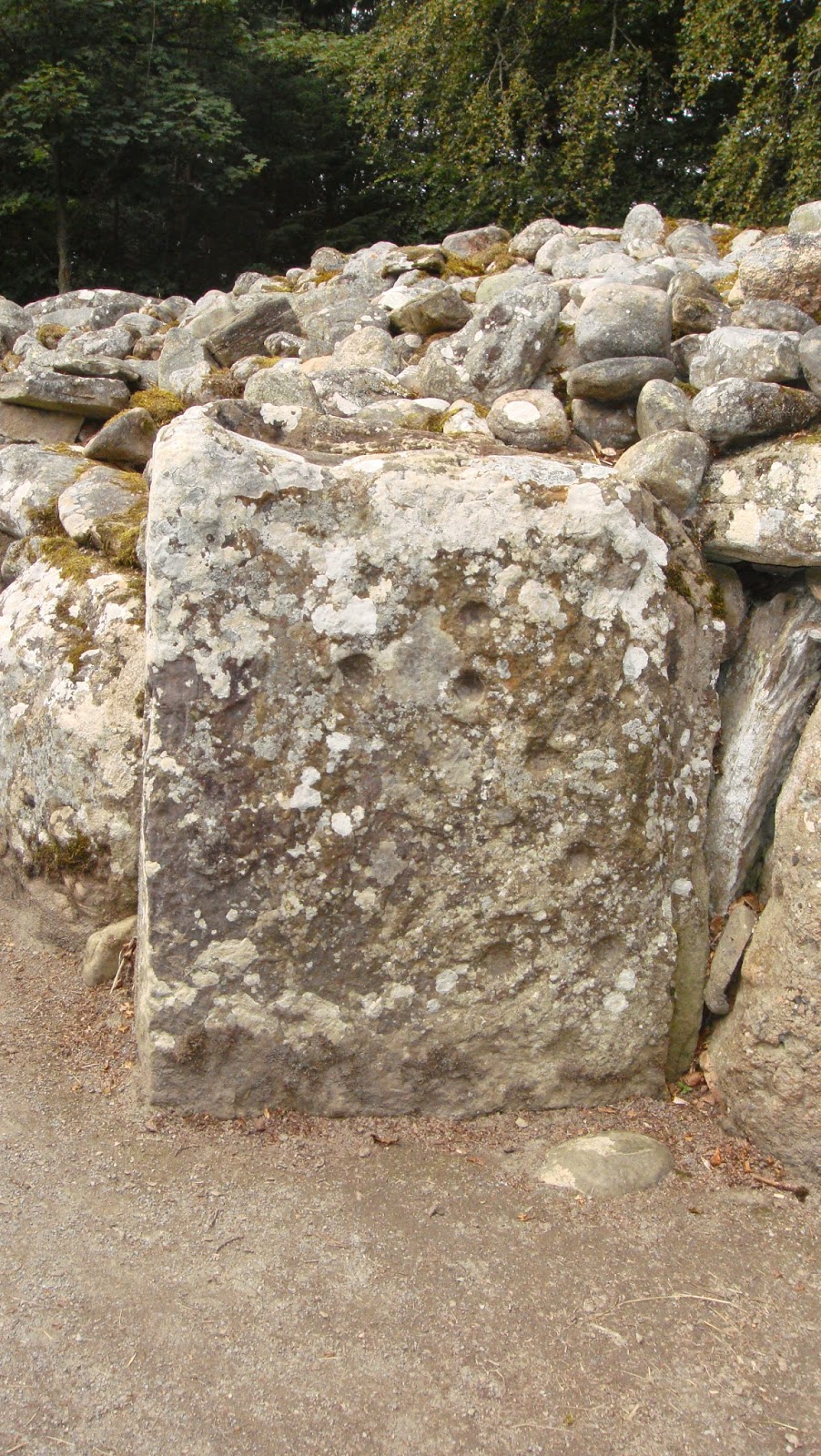 One thing amused me recently, thinking back to Clava. I was looking at the Outlander series, by Diana Gabaldon. 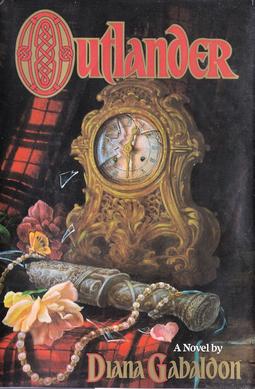 The series starts with the heroine, Claire, being flung back in time after touching a standing stone. The problem is her stone circle is supposed to be on a hill near Inverness. There are no stone circles like the book describes. Clava is the closest, lying just beyond the Culloden battlefield. 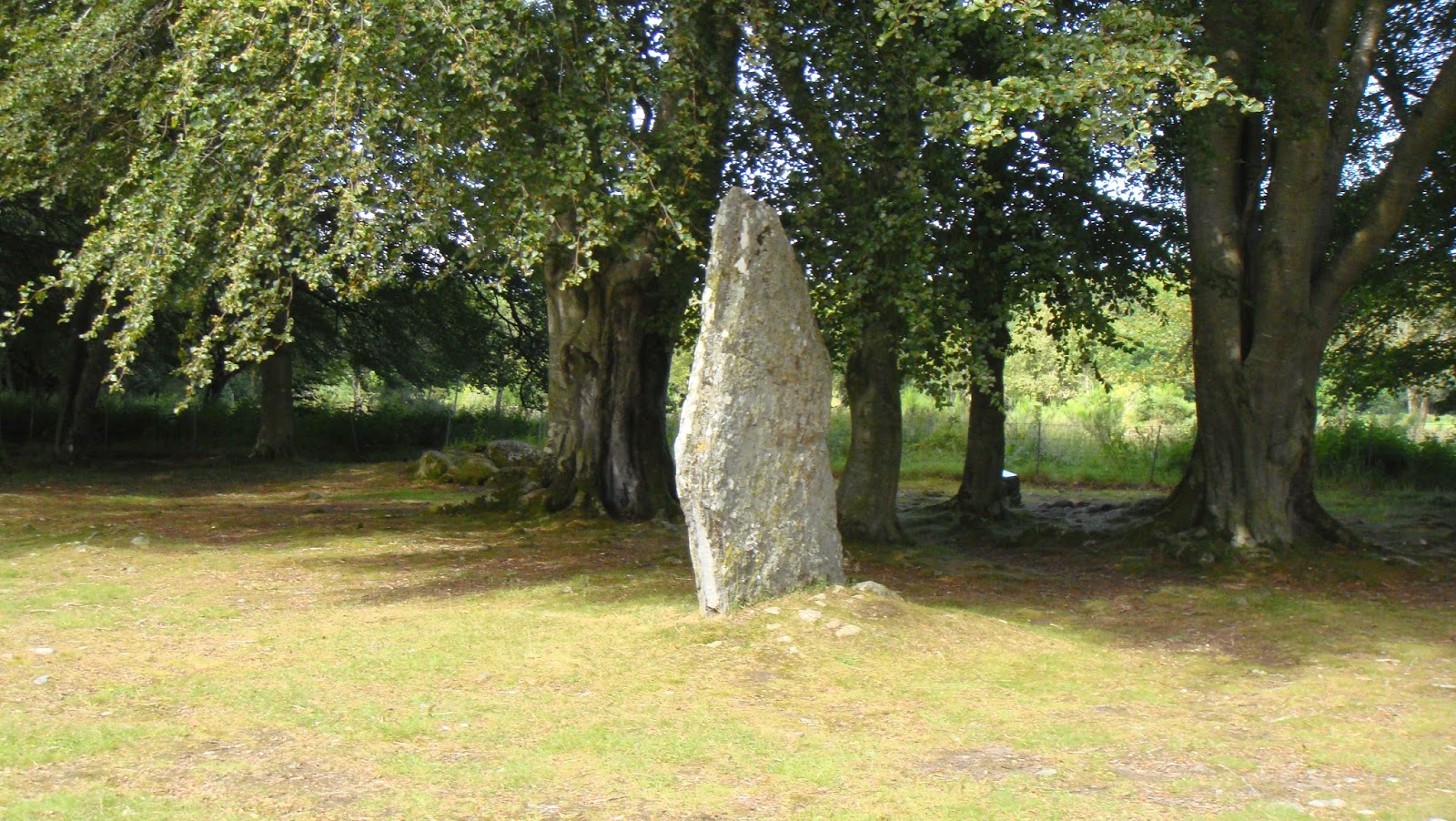 Another strange thought - Jacobites probably fled the battle through these stones... 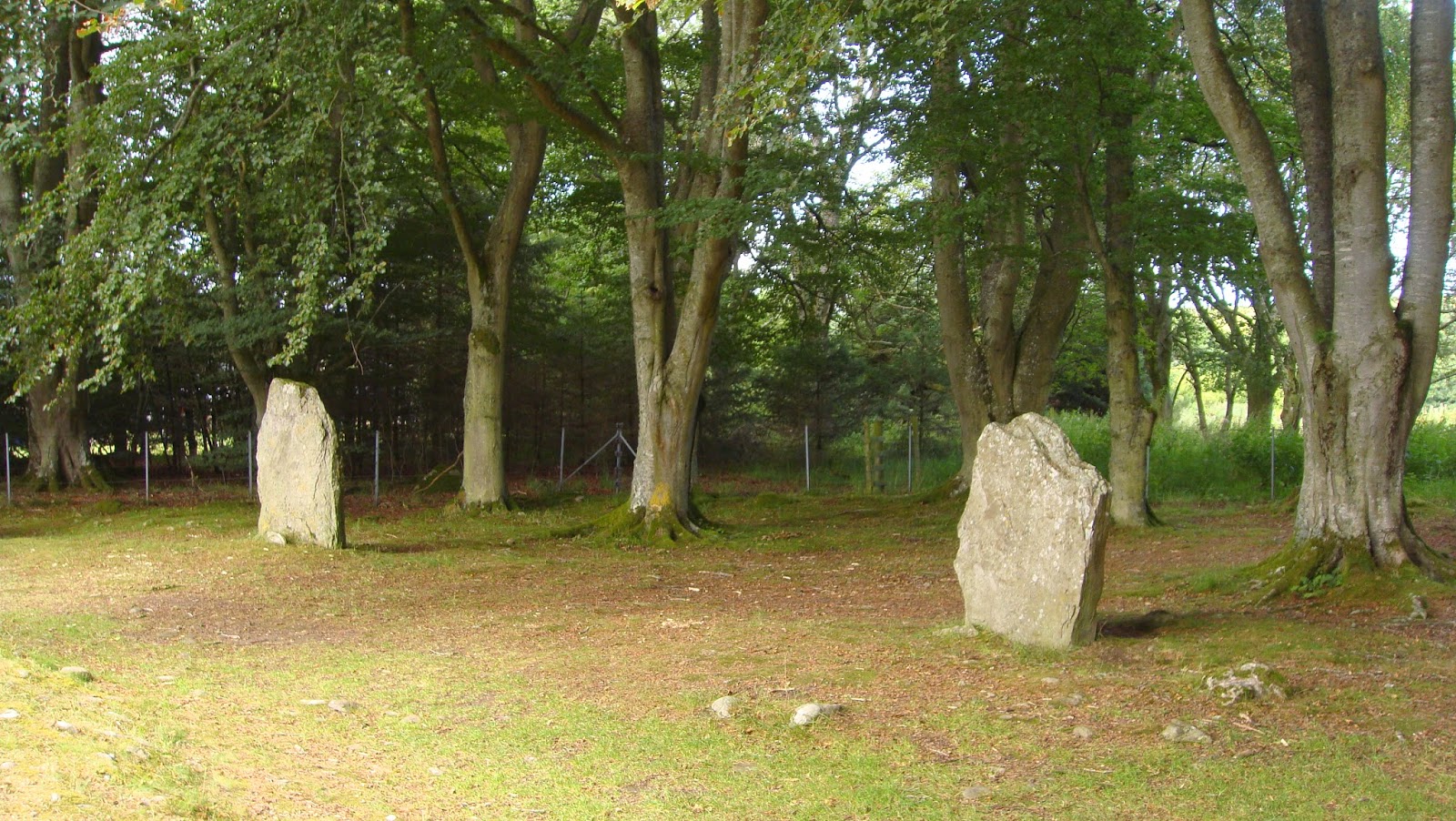 ... which makes this bit of Graffiti on the nearby viaduct all the more ironic! 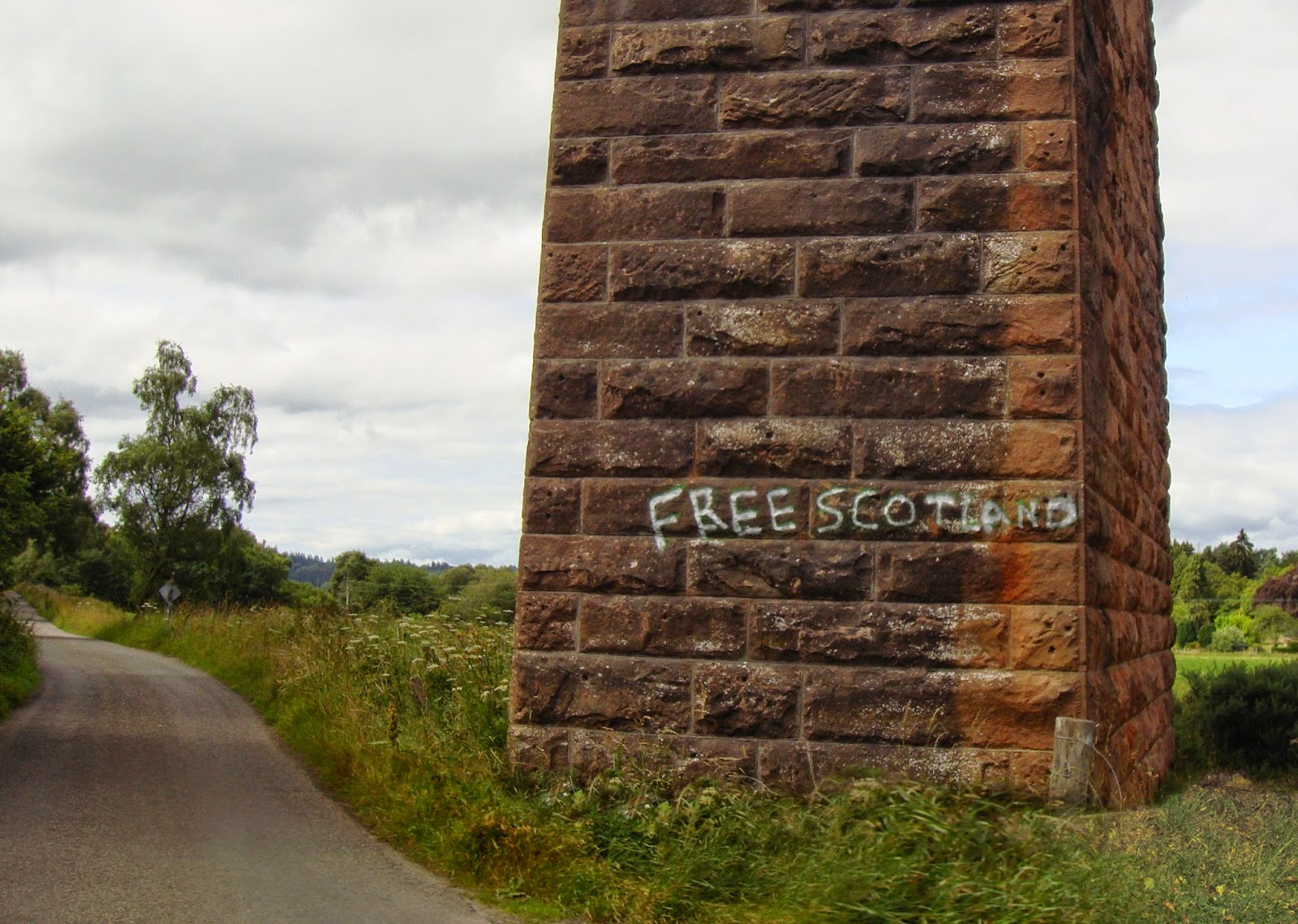 From Clava we travelled on to the Black Isle, to look at Munlochy Clootie Well. It is a bit of a climb to get there, up the hill. You can already see the "cloots" (bits of cloth) tied to the trees. 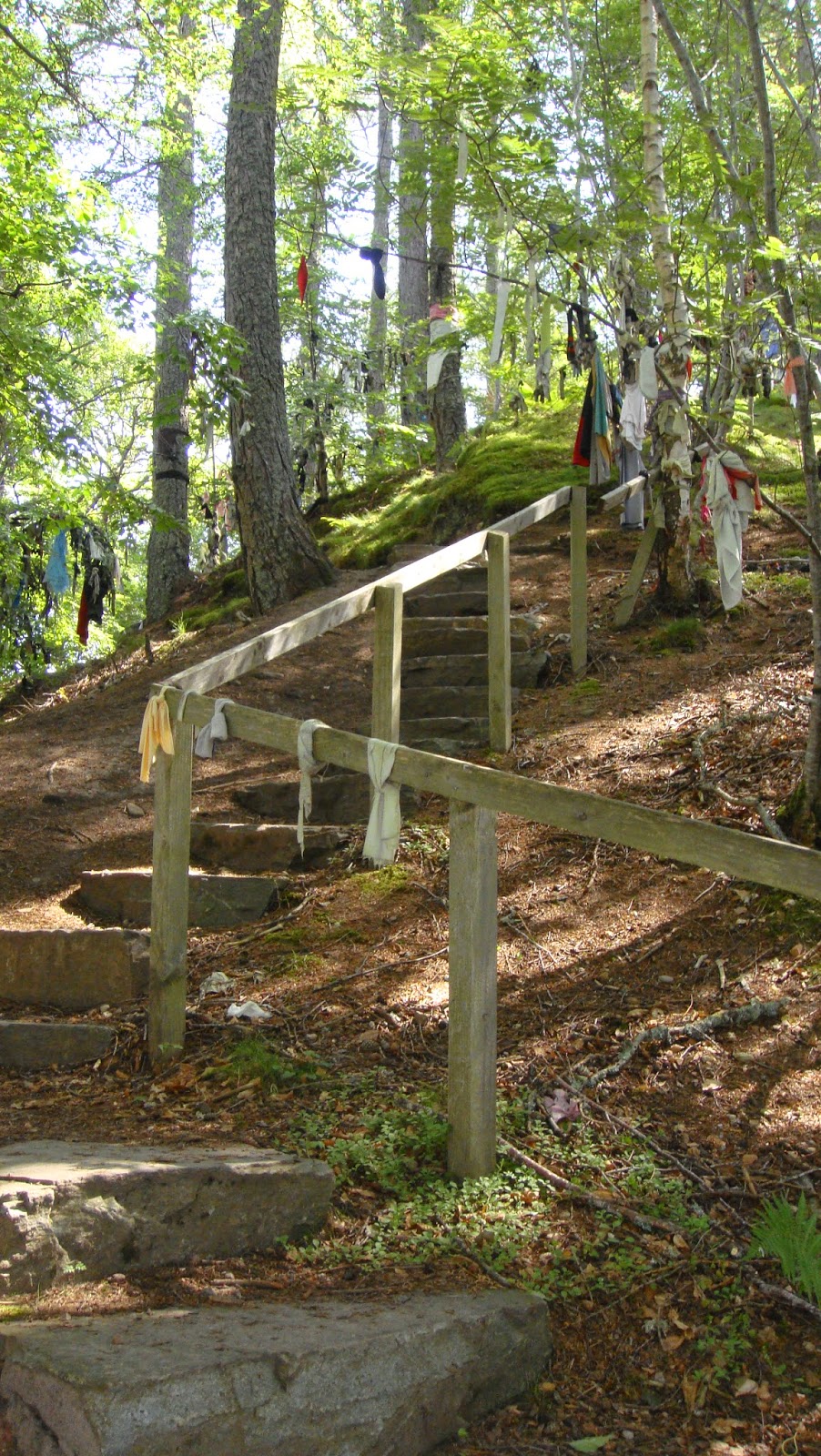 There are a LOT of cloths and clothing tied to those trees! For those who do not know... a Clootie well is a sacred spring. Often healing mineral waters of some kind.

In ancient times they were the homes of goddesses, but most were transferred to The Virgin Mary after Christianity arrived. The belief is that you dip your cloth in the sacred water and then tie it to a tree as a prayer for healing. As the cloth degrades your illness will fade. So it is not advisable to leave an item that is not biodegradable! The well in Culloden Forest was part of the May day spring celebrations right up into the 1960s, but it is in a very sad vandalised state nowadays. We try not to go there. It's too sad. 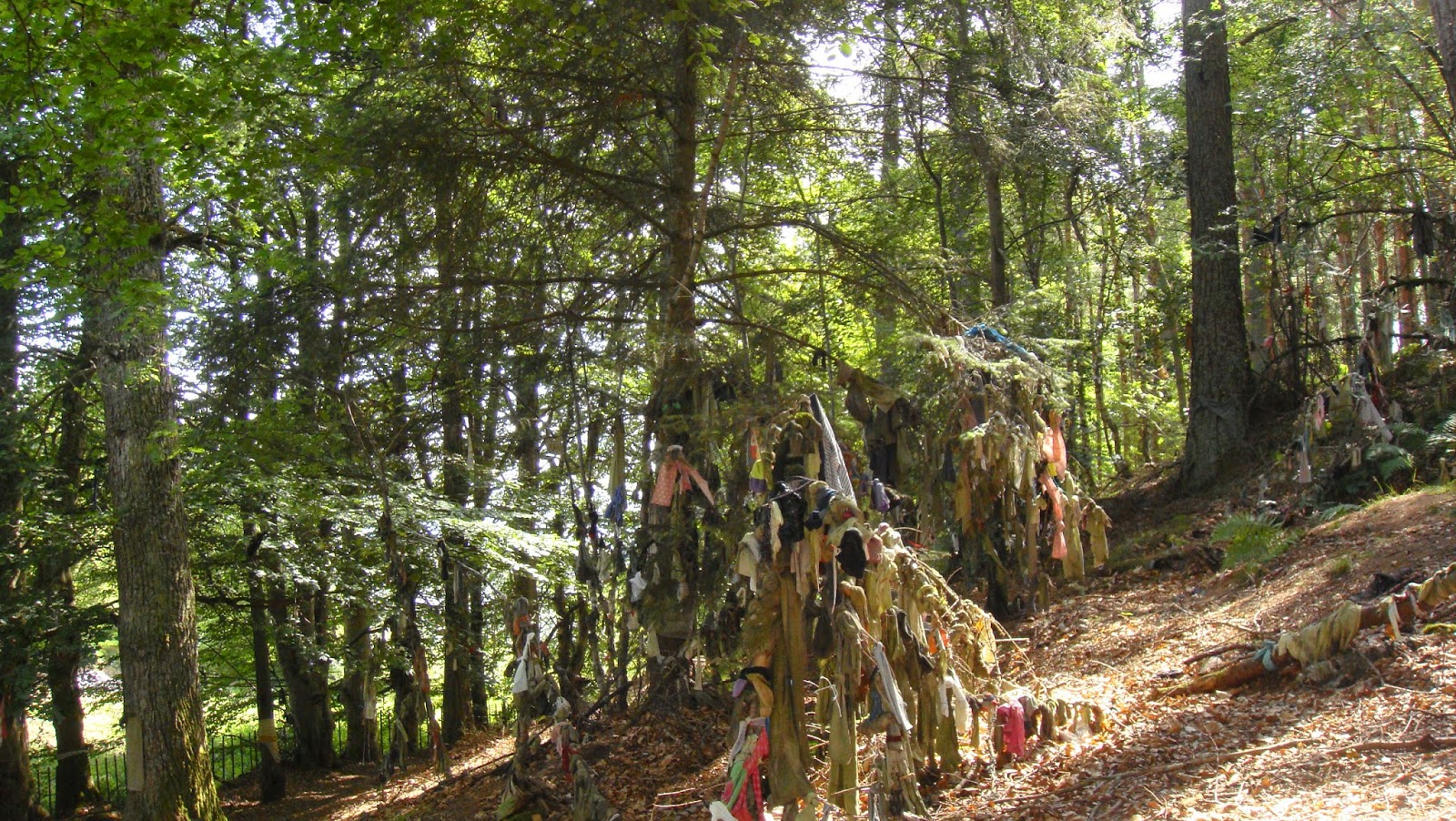 On the way back to the car a young man going up the hill asked us if we'd seen any fairies. Our friend was a bit startled, thinking he was joking, but he assured us that his mother had often seen fairy folk in the woods as a young woman. He told us he was there to give thanks. He had left a cloot and been healed of an illness.Strange, magical and outlandish... 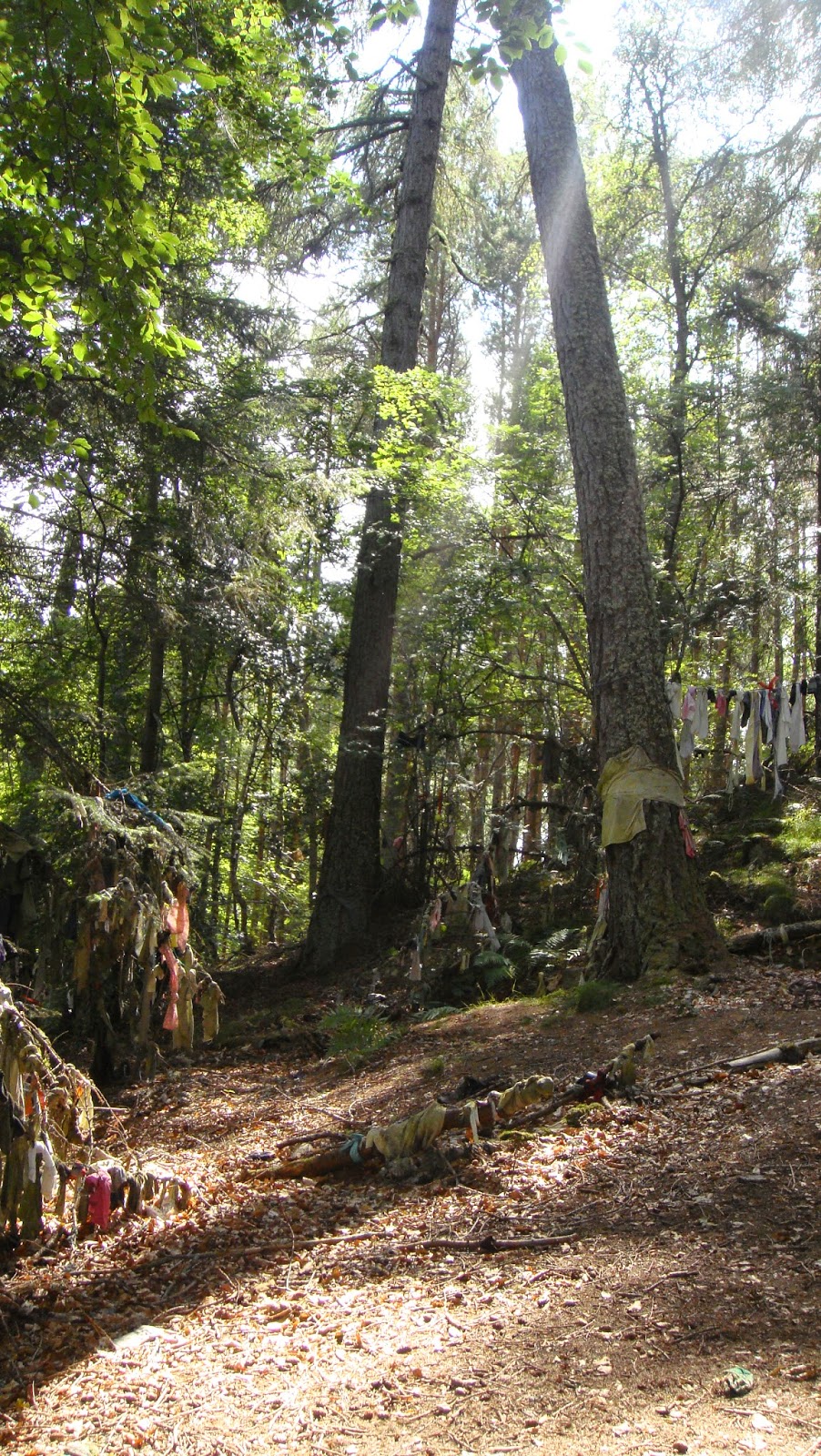 Wonderful post and loved the history! What a magical place. I would love to see it someday and have a visit with the local wee folk. Great pictures Michelle.
Jaime..*swoon.. :)