It felt appropriate to take a side step on Remembrance day this year, especially since my theme for Blogblast for Peace was to "Be the Change" by refusing to believe any situation was hopeless.

In our area of Scotland a new 'battle line' is forming as people group together refusing to believe in unavoidable loss. As part of the government’s budget cuts one of our local RAF air bases, Kinloss, is being closed early next year. The fate of the other base - RAF Lossiemouth, is very uncertain.

...but the folk of Moray refuse to give up hope. All kinds of petitions and action are being organised to help save RAF Lossiemouth. Just last Sunday (7th Sept) a march was held in the town of Lossiemouth. Over 6,000 people attended, including ex-RAF pilot, Colin McGregor (sometimes better known as Star Wars actor Ewan McGregor's brother), Scotland's First Minister, Alex Salmond, and leaders of other political parties.

It might seem strange for a 'Peace Bee' blogger to be talking about saving an RAF base, but this is about far more than the obvious. Lossie is also the home of the search and rescue helicopters that regularly pluck the desperate and injured from mountains, cliffs and sea. Kinloss has been the aeronautical rescue coordination centre for all of the UK (police, fire, ambulance and coastguard) since 1997. Both Lossie and Kinloss air bases have been filmed in the TV show "Highland Emergency". You can find their fan page, and past episodes on YouTube HERE.

During World War II it was bases like Lossiemouth and Kinloss that helped to save the war and they helped to keep the Peace during the Cold War years too. Lossie is most famous as the home of the 617 “The Dambusters” Squadron (12 Nov 1944), but if both the bases shut we lose far more than just a portion of world history. Nowadays they also guard the coastline from more subtle enemies - illegal fishing and drug smugglers. The RAF bases of Lossiemouth and Kinloss have been a part of the community of Moray for over sixty years. The people from the bases work here, live here and have interwoven their lives into the area for generations. If Moray loses both bases the economy of the area will suffer... their will be civilians amongst the casualties of cutbacks.

So for this Remembrance day I'm asking my readers to not only remember the past, but also the future. When you think of those that have died for Peace you need to remember those still alive who work for it - especially those who are about to be made redundant.
Lest we forget... the living count as much as the dead. 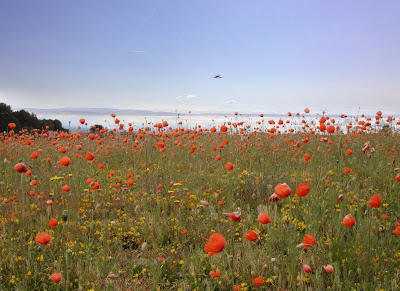