All Creatures Great and Small...

...
This week hubby had an errand to run in the mountains and I went with for the drive. We did check the weather sites first to make sure the roads were clear enough and hubby has driven through worse weather than this winter, so I knew I was in safe driving hands. ;-)

But the first thing to block our way was neither snow nor ice. We turned a corner in a forest and...
there they were. 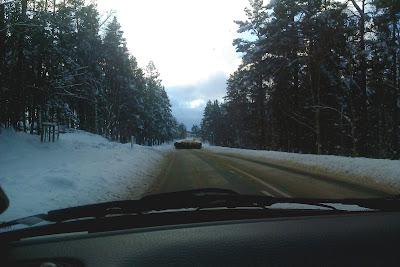 A whole herd of cattle staring at us with as much shock as I'm sure we were staring at them. We stopped the car engine right away, but the sight of us was just too much stress for our bovine blockade. They all turned tail and started clomping off as fast as they could manage on the icy road. 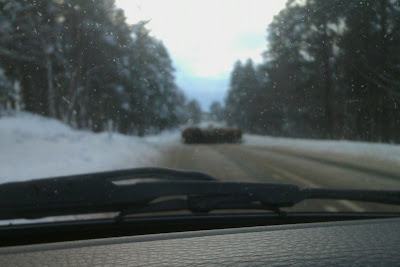 At that moment a lot of yelling started up in the distance and we realised these were cattle being driven down from the hills by the farmers. One farmer ran through the cattle and past our car. He stopped just behind us and started calling, "Come! Come on. COME!" and eventually... painfully slow at first... the cattle began moving back towards him. I only took one photo as they were very nervous and large very nervous cows can stampede and squash a car quite easily. 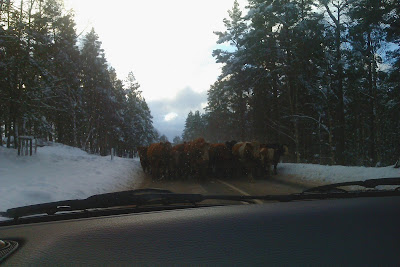 When they reached our car they all stopped in horror once again... and MOOOO'ed loudly. All these huge heads and rolling eyes staring at us as if we were the most horrific thing they'd ever seen in their lives. It was funny in a slightly unnerving way. They did bump our car a few times, but left no more damage than a bit of fur and mud and a lot of cow aroma.

Once we were out of the forest it was a fairly quiet trip through the hills and moorland. Everything was covered in snow, including the roadsides and parking places, so I didn't have a chance to stop and take any photos. I took this one when we made an emergency stop to clean the windscreen - the wipers were too frozen to do the job. 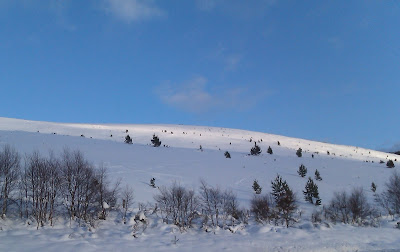 When we reached our destination I waited in the car. I was well prepared for a short wait - hat, gloves and a travelling blanket! ;-) It was really beautiful being out on a farm in the middle of the mountains. I took this photo of the farm fields opposite the barn where I was parked. 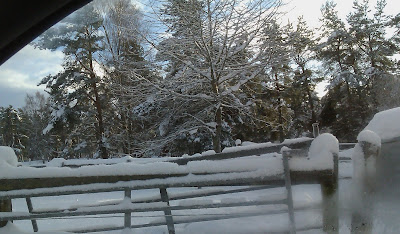 There was a big hay bale under those trees. You can't see it in the photo as it was a bit shadowy. I must have sat and started at that scene for about 30 minutes before the hay bale turned around and scratched its butt with a horn. It was a highland cow - not a hay bale! I really did burst out laughing when I realised my mistake and then I laughed again when I noticed another almost invisible creature sleeping on the jeep parked by the barn.
Can you see him? 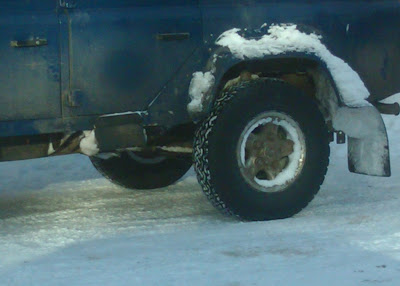 It's a little Dunnock (hedge sparrow) sleeping on top of the tyre. There were also four robins flying about the jeep, but they move too fast to photograph. They did come and check me out too - landing on the car roof and windscreen to STARE at me in disapproval. Robins are very aggressive and territorial, especially in winter, which makes seeing four together most unusual.

On the way home the roads were quiet and clear. We stopped again to clean the windscreen and I took a few more pictures. 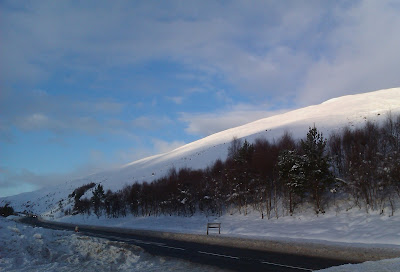 At this time of the year the sun doesn't rise very high in the sky and sets around 4:00 pm. I love the way the sun turns the snow into a billion diamonds, but it's not easy to catch that incredible glittering sparkle in photos. If you click to enlarge this last photo you can make out a few sparkles, but nowhere near what the reality was like. 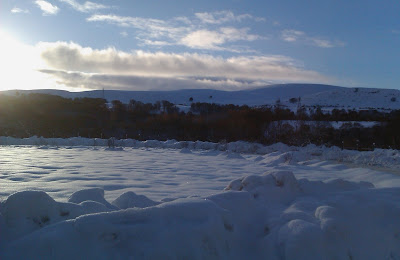