...
Every year we take a photo of the Christmas tree; it's become a family tradition. This year mom and I started talking about all the trees we've had over the years. She went and dug out the photos and scanned her favourites and I've added a few of my own. 'll point out now that the trees have almost always been fake, because dad and I are allergic to pine. I'm not sorry, I always felt that killing a tree for a month of decoration was depressing.

This first photo is me pointing out my very first Christmas tree. I thought it was HUGE, and amazingly beautiful, as a child. I found it as an adult, stored in my gran's back room. How it had shrunk in twenty years! 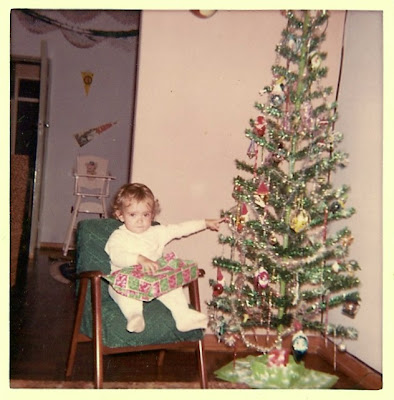 This one is from my high school years, in South Africa. That's my gran, my mom, me and my grandfather, with my dad in front. I'm holding the dog that owned us - Pip. Behind in the top corner you can see my old passion - building model ships. The tree that year was decorated in silver, gold, blue and red. 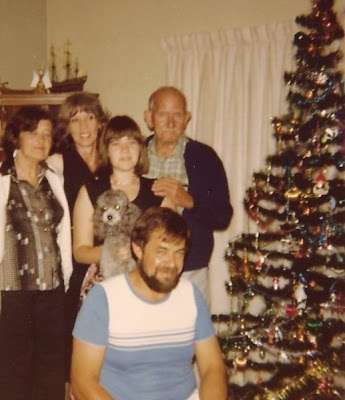 This one also has Pip, doing his "Look at ME" pose thing. He loved being photographed and would always dash to sit in your line of sight when you had a camera. He'd also sit on the newspaper if you were reading - he had to be the centre of attention always. ;-) The tree seems to be just red and gold that year. 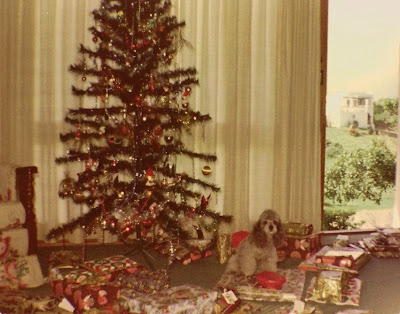 The next one is extra special, because this was the first photo hubby ever saw of me. :-) It was up on a friend's website for Christmas 2001, but it was actually taken about five years earlier. This tree was bought in the mid 1980s, it was much more realistic and lasted right up till the late 1990s. The theme that year was silver, red and gold. 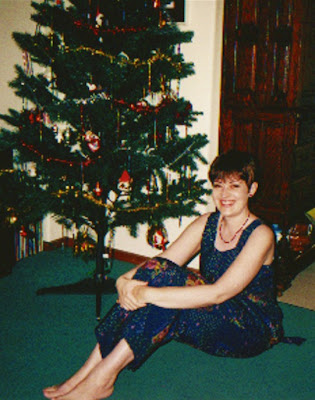 The next photos were taken in Scotland.
This first tree is actually one my dad made. It won first prize in a local Christmas tree competition in South Africa in 2000. :-) It's a double spiral of wooden "branches" that taper into a tree shape. The original, that we won with, was painted white and decorated with gold and silver. When my parents moved to Scotland dad brought his tree with him. :-) We painted it gold in 2005 and used green tinsel on it... because the all white looked way too cold in snowy Scotland! 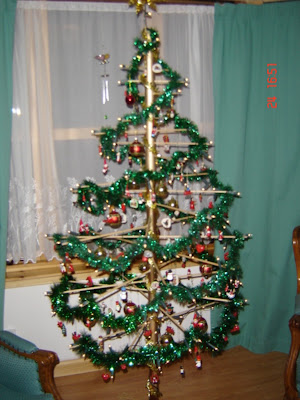 Mom's favourite tree, 2008. Our colours that year were gold, copper and bronze. It was the Father Christmas, standing beside the tree, that gave us the colour idea. :-) 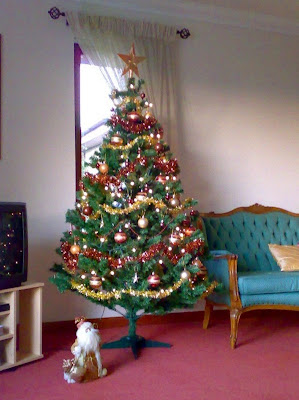 ...and now this year's tree. Mom and I chose red and gold again this year, but we used coloured lights for a change. All the other trees were white lights. You can see Father Christmas standing up on the corner cabinet behind the tree. It's the same cabinet from the very first photo of me as a teenager. :-) 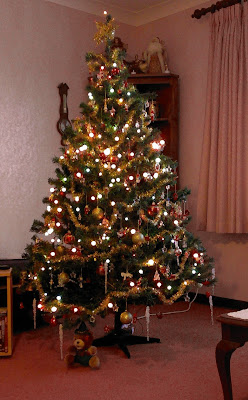 The teddy bear, below the tree, belongs to dad. It's his yodelling bear. Yes... it really does yodel. (LOL) I took a close-up photo of the decorations... 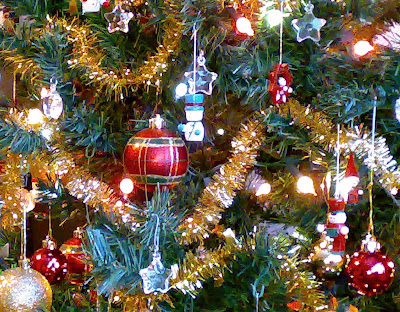 The crystal stars were originally hair accessories I bought on sale and the little ornaments are all hand-made wooden ones we've bought from all sorts of places over the years. The gold baubles were bought in Scotland and the red tartan ones... were bought in Africa!