Recently the TV news showed footage of a little girl in China being hit by a car. She died because neither the driver, nor the 18 people who walked by or over her, stopped to help her. She seemed to be invisible to everyone except the CCTV cameras.

What went wrong? How can you overlook a dying child beneath your feet? It seems unbelievable that people can be so uncaring, but then you stop and look around you and it gets to be even more frightening. Modern life seems to have become a war where only the selfish flourish. Win at all costs, reach the top at all costs… The message is fairly clear - that it is perfectly fine to hurt, lie or elbow anyone out of your way in order to gratify your own personal greeds and needs.

From school to sports, and jobs to politics, it is considered perfectly acceptable to fight to reach the top. Our politicians battle it out with each other constantly, and often quite nastily. Our sports teams are expected to win regardless of fairplay and businesses lie and manipulate each other out of the way to get the best trade deals.

Battles… wars… aggression… struggle… I’m so tired of it all. I’d love to just run away and hide, but I can’t, because there are some battles you simply cannot walk away from. You see… I’ve realised I’m a fighter too, but of a different kind. I’ve realised I’m a Peace Warrior. 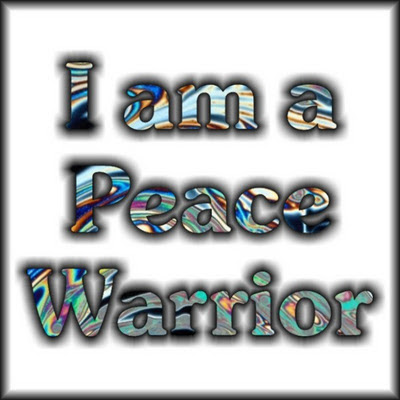 Now I’m not meaning anything wild and drastic by that, I don’t go chaining myself to railings chanting peace slogans. You do get those kinds if Warriors for Peace, those people who leap into public view, but on the whole most Peace Warriors are invisible, overlooked and unknown. Peace isn’t fought for on battlegrounds or under spotlights – it’s fought for in all the ordinary everyday places by very ordinary everyday people, like me… and like you.

Peace has no prejudices; you can be any age, religion or race. Peace Warriors may fight with tact and smiles or arm themselves with petitions and posters, but basically they are all the same. There are Peace Warriors out there carrying school books as well as those who have dentures. They are many and varied, but there is one thing they all have in common - they all expect more from humanity.

Now, there are those who think any attempt to change humanity is ridiculous and unrealistic. Maybe… maybe Peace Warriors are dreamers of improbable dreams, but we aren’t quitters. Like Gandhi and Irena Sendler, Peace Warriors quietly get on with doing those things other people say are impossible.

As a Peace Warrior friend of mine puts it:


“I blog for peace because some say it is impossible to achieve.
I am stubborn. Tell me I can't and I will.”

She’s right, Peace Warriors have to be stubborn, because changing the world is grindingly slow - you’ll not survive this battle if you’re impatient or only in it for short term rewards.

There’s another misconception about Peace – that being a pacifist is an easy way out and that stepping back from violence, or war, is akin to cowardice. The truth is actually the complete opposite. Peace Warriors challenge others; they shine a light on what needs to be changed and that can be a very dangerous thing. Throughout world history Peace Warriors have been mocked, threatened, hated, beaten, imprisoned and even executed. Peace has never been the choice for cowards.

True Peace Warriors don’t wield weapons or incite violence, but they don’t step back and ‘take it’ either. Peace Warriors are those people who not only think, “This isn’t right; this isn’t fair,” they stand up and do something about it. If you’ve ever made a decision based on what was right instead of what was popular, if you’ve ever put the safety of others ahead of your own, if you’ve ever stood up to a bully, yet not lowered yourself to their levels to do so… you are a Peace Warrior.


Peace stands up when the rest sit down,
Peace steps forward when the others turn and run.
Peace shines a light in the darkest places,
no matter the danger in what it faces.
Peace is a warrior, do you understand?
Peace is a warrior within your hands.