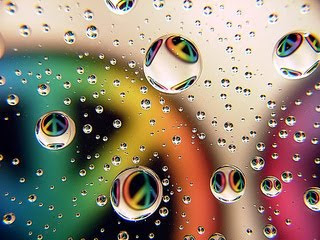 Every time that I’ve taken part in Blogblast for Peace I’ve tried to find a new viewpoint to the idea of Peace:


But when it came to planning for 2011 my brain went blank ... so I avoided the question by designing some Peace badges for Mimi instead. 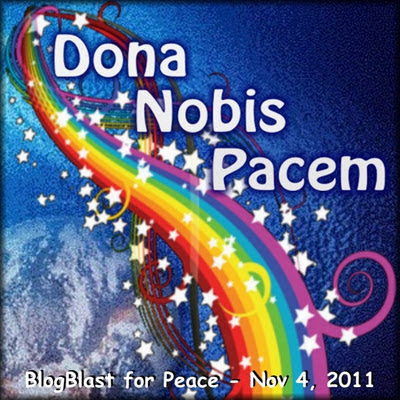 Then I avoided it again by getting involved in Mimi's ‘100 Reasons for Peace’ challenge. It started small, just thimblefuls of peace, but those small posts soon started to overwhelm my everyday blogging and so I moved them all to a new blog - Peace Thimbles.

I was busy preparing a thimble post, when it struck me – THIS was my Blogblast 2011 message! This was everything I wanted to say.


'Have you been half asleep
and have you heard voices?
I've heard them calling my name.'


That small thimble was a special song I had intended to post on the birthday of its composer, the magically talented Paul Williams. Paul Williams has been entertaining the world, and touching hearts, for over four decades. His songs have been recorded by everyone from Elvis and David Bowie to Frank Sinatra and… Kermit the frog.

It’s Kermit’s favourite song, The Rainbow Connection, that sums it all up for me 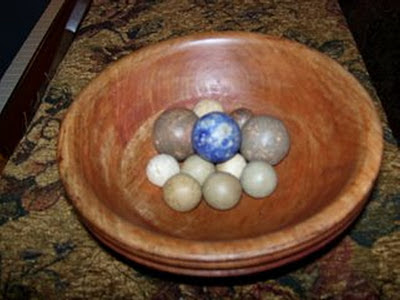 the Peace Bees, the Peace Bloggers,
all the everyday rainbow-hearted people involved…

'the lovers, the dreamers and me.'


The dreamers... that’s the real miracle of Mimi’s Blogblast - the fact that it has brought together people from all over our planet. People who all share the same simple dream of wanting a better, safer world.

I chose a thimble for my peace “symbol” this year, because some days it feels as if trying to make the world a better place is like bailing a flood with a thimble. Let’s face it, you turn on the news and the media bombards you with wars, murders, and disasters. Dramas sell more papers than ‘feel good’ stories; most journalists would rather cover a war than a charity gala. As a result we get reminded far more often about humanity’s catastrophes than our achievements.

War is dramatic – Peace is humble.


It’s easy to feel small and overwhelmed when the media keeps reminding us of our failures. It’s easy to get discouraged when you’re standing there all alone with your thimble clutched to your heart.

'So we've been told and some choose to believe it
I know they're wrong, wait and see.'


So maybe you can't bail a flood with a thimble, but what if you had the world to help you? 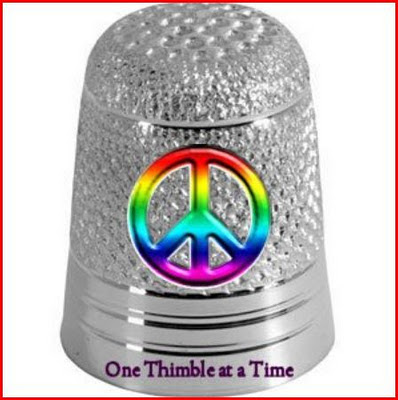 What could you achieve if you bailed with a billion thimbles? What if you discovered you weren’t so alone after all? That’s what Mimi proved to all of us in blogblast for Peace – that we weren’t alone. Not yet a billion thimbles, but not alone.

'Somebody thought of thatand someone believed it,and look what it's done so far.'


I went looking for more info on what Paul Williams is up to nowadays and I discovered that he has a whole armful of thimbles of his own on his Connections website! You can find them here at Save me a Dream. Paul Williams is out there bailing bravely for victims of child abuse, domestic violence, fetal alcohol syndrome and so many others I can’t list them all! It’s an absolutely fantastic site, please go look at it. He has links to all kinds of help and support – a hundred beautiful thimbles.


'Who said that every wish would be heard and answered
when wished on the morning star?'


Now, as much as I like Kermit, I found a version of The Rainbow Connection on YouTube that fits my ideas about a peace-filled world far better. Go watch it and you’ll see a fragment of what I dream our world could be…

I also loved the way the world famous singer in this video walks into it in such an unassuming way.

I went to check up on Willie Nelson and found out that he's busy with his own thimbles of hope - he's president of Farm Aid. 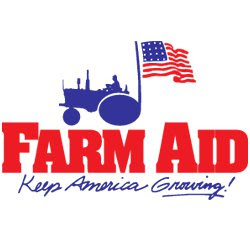 Farm Aid is a non profit organisation that tries to keep family farmers on their land. Farmers are also the often completely forgotten victims of war. You cannot farm in a war zone, I know - I have family on my dad’s side who have been caught up in having farming land in a war zone. When we lose our family farmers, we lose the heart of our countries. When we lose farmers in war zones... people starve to death.


“I've always believed that the most important people on the planet are the ones who plant the seeds and care for the soil where they are grown.”

He’s right - the smallest things are often the most important. It’s those who sow seeds, those who bail hope in small thimblefuls, who make this world a place worth living in. It’s the small ordinary people, mostly invisible, rarely acknowledged, who are the true heroes in Life.


So this year’s Blogblast theme is for you – sitting there reading this, holding your thimble and feeling like you don’t make much of a difference because you’re too small to count…

You count to those who matter.

'I've heard it too many times to ignore it.
it's something that I'm supposed to be.
Someday we'll find it, the rainbow connection,
the lovers, the dreamers and me.' 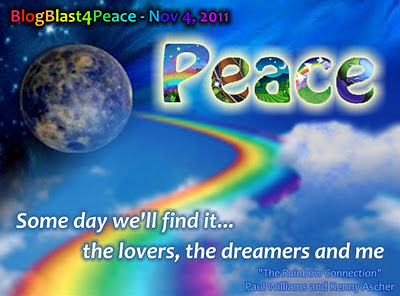 Never think you’re too small to make a difference...

'Life's like a movie, write your own ending.
Keep believing, keep pretending.
we’ve done just what we set out to do
Thanks to the lovers, the dreamers…
and you.'


* thank you to my friend, Kim, for designing the thimble. x
*credits to Sarah Edwards, for creating and maintaining Paul Williams' Connection websitesAnd everlasting thanks to Paul Williams and Kenny Ascher for "The Rainbow connection" :-)
...
Posted by Michelle at 00:11