This is my tenth anniversary of taking part in Blog for Peace.  Ten amazing years of creating a global community all focussed on one topic - peace. We are huge, on every continent including Antarctica, but have we made a difference?

That has bothered me lately, as I look at the chaos on media news. If so many people worldwide want peace, why are we still so far from our goal? It took some arguments on Facebook, an ancient maxim and a song to make me realise what I'd been overlooking: that we need to THINK for peace.

The arguments came about due to my friends being a very varied bunch of people. I've learnt so much from them, especially the ones whose politics, culture or religions are very different from my own. I'm ok with differences, but there are many who aren't ok. I have friends who openly fear "those people" who are also my friends. Worst of all... because they fear each other, they begin to resent or even hate each other. And that's when I remembered that ancient Roman maxim: DIVIDE AND RULE. It's a very simple technique that was used in warfare and is now used in business and political strategy. Here's the basics of how it works:
...and those last words triggered the memory of a song: "Work For Peace" by Gil Scott-Heron.

they are determined to keep the citizens secondary,
they make so many decisions that are arbitrary. 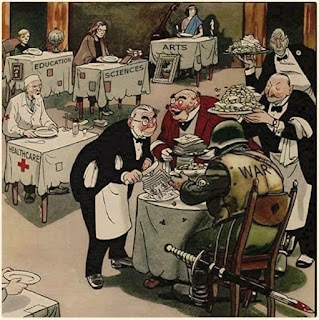 There it was - my missing link. World powers and big business do not want peace because there is no money to be made from it. So they talk a lot of words about peace, but they foster the old maxim of divide and rule.


How many news items have you seen this year where the message was that the other side is not to be trusted?
How many internet sites have sent you information on why you should fear people who are different to you?
How many times has the military and the monetary tried to force us apart?

I watched a TV movie a few months back. It was a sci-fi thing about aliens invading the planet. Young soldiers were given special goggles through which they could see these "invisible aliens" in order to hunt them down and kill them. But one young man loses his goggles and realises that they're actually killing human beings. The battle isn't about aliens, it's about the government wanting to cull over population. There was no enemy; no alien invasion. Only divide and rule.

What if this were the truth right now? What if there were only a handful of genuine "bad guys" and those allowed to flourish in order to keep us all so afraid we toed the line and obeyed all the rules? What if we stopped thinking for ourselves and let THEM think for us...

Is it that far fetched? I don't know. All I know for certain is that my Facebook wall is made up of THEM. My friends are black, white, Asian and Native American. They are Muslim, Christian, Jewish, Atheist, Hindu and Pagan. I have witches chatting to church-going good folk on my Facebook wall. I have a Kosher vegetarian and a Halal vegetarian. I have an atheist vegan and a meat-eating Hindu. I have politically Left friends wanting the world to be a better place... I have politically Right friends who want the same.

They may have different things they believe and ways of living, but all of them want the same basic things: a decent salary, a nice home, safety for their families, healthy food, clean water and a better world for their children.

Let that sink in for a moment, please and then... THINK. 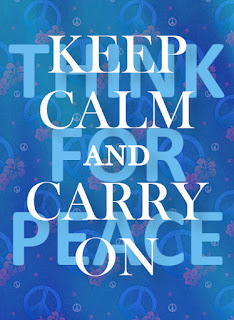 I based that design on a British World War II poster made to help people cope with the ongoing stress and fear of war. The message is just as important now as it was then. Keep calm and carry on. We absolutely cannot achieve peace by becoming angry or fearful of each other. We have to find ways to communicate, to share our similarities as we balance our differences. 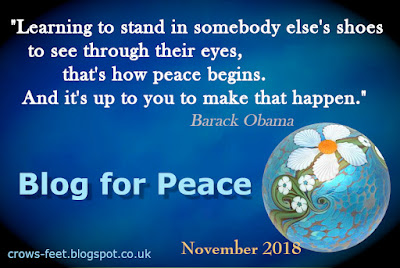