Today is Thanksgiving in America... and also Thanksgiving in a small town in the Netherlands. A Dutch American Thanksgiving. I never knew that until today! It seems that a large chunk of the settlers on the Mayflower were Dutch immigrants from a place called Leiden. You can read more about Leiden's American Pilgrim Thanksgiving service here.
Every November on Thanksgiving morning, the Pieterskerk hosts an annual ecumenical service. You can learn more about the event here.

Read more at DutchNews.nl:
Every November on Thanksgiving morning, the Pieterskerk hosts an annual ecumenical service. You can learn more about the event here.

The Smithsonian says this in an article on the story:

In 1620, the ship Speedwell left from Leiden to Southampton, England. The passengers moved over to the Mayflower, and from there set upon their their long voyage to America. From 1609 to 1620, many of the assorted clustering of people known as the Pilgrims had resided in Leiden, working, running a printing press, and bolstering their numbers. Bart Plantenga for American Heritage:

The Pilgrims had evaded English persecution through the peculiar tolerance of the Calvinist Dutch, who had given them a religious safe haven upon their arrival in 1608. By 1609 the newcomers had settled in Leiden, whose city fathers declared they could “refuse no honest people free entry to come live in the city.” In Leiden the Pilgrims joined other British exiles amid a population of students, intellectuals, and refugees, including Gypsies, Mennonites, Lutherans, and Muslims.

Two things struck me there:

1. The early pilgrims on the Mayflower weren't all English, as I'd thought.
2. Leiden offered sanctuary not only to those Pilgrims fleeing to America, but also to Gypsies and Muslims.

Leiden actually had its own Thanksgiving holiday long before the Pilgrims set sail and there are some who think the Pilgrims liked this idea and took it with them to America. Whatever the case, how wonderfully tolerant and compassionate the people of Leiden were. Opening their town as a sanctuary for refugees fleeing persecution.

That is truly worthy of a day of Thanksgiving. :) 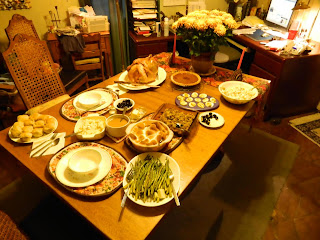