Return to the Centre 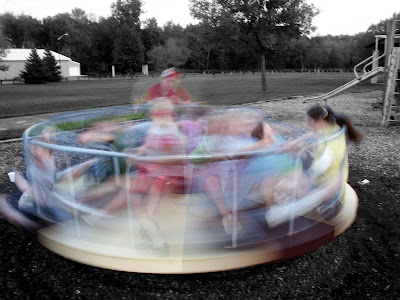 Last weekend I hauled out our old photos from my school days. It was a strange feeling looking back thirty years into those forgotten faces. What surprised me was realising how much of who I was, and how I saw things, was influenced by where I was standing when I viewed them.

I’ve been trying to figure out how to explain that in a way that makes sense. The only thing that comes to mind is a wheel or a merry-go-round. They both have a central axis that they spin from, without that there is no movement. People are the same. We each have a core centre that keeps us turning through our lifetime. What we see in the mirror, and of each other, is merely the outer rim of the wheel, the edge of the merry-go-round. This is that part of who we are that is exposed to the world - our ever-changing socialising and work self. The centre never changes. It is our core personality, our purest form of our self, mind and spirit. You can change the outer rim “you” a thousand times in a lifetime, but the centre always stays the same.

Looking back at my old school photos I can now see what I couldn’t see then – the centre of my own wheel, the core of my self. It was a strange feeling and for some reason it made me cry. I think it was because back then I never realised I had a centre core. So, on Sunday, I sat and had a good howl in my bedroom... which I couldn’t explain to anyone since it didn’t even make sense to me at the time. I cried for the girl in the photo who was about to dash out the school gates right into (what she would think) a brick wall. I cried for her, because back then she thought she was the rim instead of the centre.

I spent quite a few years after school thinking I was spinning out of control without realising there was always that centre me I could have returned to. Have you ever done that on a playground merry-go-round - returned to the centre? At the edge everything moves really fast and the world becomes a blur. It can feel scary and out of control, but if you walk back to the centre everything slows down and you can even see which way you’re turning.

This weekend I went back out to the edge with that schoolgirl version of myself and remembered what it felt like to be me before I started spinning too fast. I realised that the core of who I am now was who I was then. My hopes, my ethics, my sense of spirituality… they’ve all stayed the same. Even through times when I spun too fast, or felt like I wasn’t moving at all, that me was always there. Who I am, who I was, are both who I will be. It’s a good feeling realising that my core is strong, even if I didn’t always realise it. If I could travel in time I’d go back to the girl in the photos and say “When things speed up too fast, return to the centre,” but then I realised… I just did.
;-)
...
Posted by Michelle at 17:33

wonderful reflection. why is it that it takes so much age to yield wisdom? sigh.

Thanks Hayden.
Why does it take so much age? I suppose there has to be some perk to getting creaky and wrinkly. :-D

Seriously? I think because life wouldn't be much of an adventure if we were born knowing everything. Rather like doing a crossword puzzle where you already knew all the answers. That being said... I do wish some of my life's "crossword clues" were less cryptic at times!

Interesting post, but I'm afraid I've such a high sensitivity to merry-go-rounds or things like that that turn round and round and round...I get dizzy and nauseous after a while.

So I'm trying to think of this from another POV...when I moved to Finland, I thought to myself, "Gee, in Indo most of my life people always say that I seem like ABC to them. I give off ABC vibes....now that I'm a newbie in Finland, I can be ANYONE I want to be."

But I stay who I really am...no matter what I am who I am. I can change and wear masks if I want to, but wearing masks would be too tiring...it's easier being who I am. :-)))

Nothing like a good cry to get you back on track again.

Sorry I haven't been around lately. For some reason, your posts haven't been showing up in my Google Reader for quite a while, and then all of a sudden it showed you had 17 posts. I don't know what happened there!!

Amel
You know what? I can't go on them either! Even swings make me dizzy. I've only been on a merry-go-round once. :-X

Daisy
I noticed on my blog that the little icon thingy went weird.. came back ok, went funny again. I did get one message saying they had a problem, so it seems it wasn't me (which I did fear since I was busy moving things on my blog and thought maybe I'd zapped something accidentally) Glad you're back anyway! :-)

Ahhh...I have never had problems with swings. I LOVE swings, but I think I took a merry-go-round once and I...puked he he he...

Wow, I'm amazed that when you look back at your old photos, you see so much more. So profound. I simply look at my pony tails and chubby face :-)

I need to go back to the centre purposefully every so often - to re-balance. I do like to go out to the far outer edges of the merry go round for a challenge or for a thrill, just holding on by my fingertips.

But over time I've learned that the sensation of possibly falling off is only a sensation. I still need to return to the core purposefully though and returning has become more and more fulfilling as I've become older...

Essentially, I need to spend some quality time there before venturing out on new adventures with courage, energy and ambition ;-)

PS: Been very busy lately, if I've been a bit quiet on-line - have some German visitors in my house and I've been exploring the region and all the city can offer with them - summer has been glorious and not over yet, so making the best of it!

PS: Forgot to add that it did take me too a long time, to "enjoy" the outer rim and to fully accept the core...

As you said, age and (hard) experience does bring wisdom - thankfully:

Jacques
You always manage to say something that really makes me think. Your replies could be reworked into blog posts! ;-)

I missed your reply! Profoundly bad at reading too? ;-)

Thinking deep is a mixed blessing. I often feel things deeply before I have words to express why. Then I have to get away to think. That's
ok online, but makes me lousy at conversation!

That was an excellent analogy. I love merry go rounds :) It took me a great many years after my high school wasteland years to come to that realization that every single person in that high school was neither better nor worse than I. I didn't now that at the time - and spent my 4 years there feeling like a nobody. In fact, feeling worse than a nobody. Oh, it is so good to move beyond the cruel veil of those years - why as you said, couldn't we know then what we know now?

I know exactly what you mean.