When I first started this blog, in 2007, I wrote about the strange experience that introduced me to chakras.
At the time I had intended to explore that adventure in this blog, but somehow it never quite happened. It's been on my mind, because recently I've been spending more time dealing with chakras than writing on blogs and I've wondered about putting some of that up on my blog, maybe on a separate page. It's also on my mind because last week my dad asked me whether other cultures also used chakras and although I had a feeling Reiki was similar, I really didn't know for sure.

I went and did some research and I can now say that the answer to dad's question is, Yes, other cultures have similar ideas. I tried to find a short simple version of the info to share here and opted for this from Wikipedia:

The chakras are described as being aligned in an ascending column from the base of the spine to the top of the head.

They are considered loci of life energy or prana, also called shakti, qi (Chinese; ki in Japanese), bios (Greek) & aether (Greek, English), which is thought to flow among them along pathways called nadis. The function of the chakras is to spin and draw in this energy to keep the spiritual, mental, emotional and physical health of the body in balance.

Due to the similarities between the Chinese and Indian philosophies, the notion of chakras was quickly amalgamated into Chinese practices such as acupuncture and belief in ki. The confluence of these two distinct healing traditions and their common practitioners' own inventiveness have led to an ever-changing and expanding array of concepts in the western world.

In Japan, the word qi is written ki, and is related to the practice of Reiki, and plays an important role in Japanese martial arts such as Aikido.

In Western culture, a concept similar to that of prana can be traced back as far as the 18th century's Franz Anton Mesmer that used 'animal magnetism' to cure disease. However it was only in 1927 that the shakta theory of seven main chakras, that has become most popular in the West, was introduced...

Little glowing rainbow-coloured creatures that give me information to report back to the person they belong to. The only chakras I see as the traditional light spheres are the chakras of animals. I've only done a horse and a dog so far so I can't swear they are all that way. I also see more than seven for humans. Sometimes I see a black or brown one below a person's feet, connecting them to the Earth, and sometimes I see a white-gold one flying around or above the person - connecting them to... well I'm not sure yet. I'm still exploring that one. :-)
I'm glad actually; seeing creatures that I can interact with is far more fun than seeing spinning light balls, but I have wondered sometimes about the fact that what I see isn't the traditional form of chakras. Chakras are supposed to be inanimate energy centres in the body, not independent little creatures with distinct opinions and personalities.

Why do I see them differently? Why, for me, do they react so actively? I found a quote about chakras on Wikipedia that might explain my chakra conundrum:

Rudolf Steiner (one-time Theosophist, and founder of Anthroposophy) says much about the chakras that is unusual, especially that the chakra system is dynamic and evolving and is very different for modern people than it was in ancient times, and will in turn be radically different in future times.

Am I seeing a step in the evolution of human chakras?
That is a very cool thought! 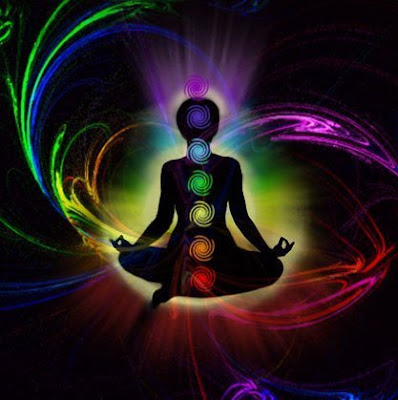