...
I rarely comment on World News, but my family and I watched this on TV and were so impressed that I felt it was well worth posting portions of this BBC news item about it:

By Anne Alexander
University of Cambridge 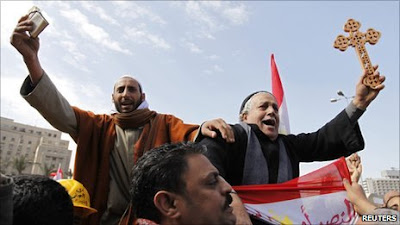 Muslim and Christian shoulder-to-shoulder in Tahrir Square
....
Making my way to Tahrir Square during the anti-Mubarak protests, a striking piece of graffiti caught my eye.

Scrawled on the concrete pillar of a flyover was the symbol of a Muslim crescent embracing the Christian cross and the words: "We are all against the regime".

During the big "Day of Departure" protest in Tahrir Square last Friday, Coptic Christian protesters made a human chain around their Muslim brothers and sisters as they performed the noon prayers. 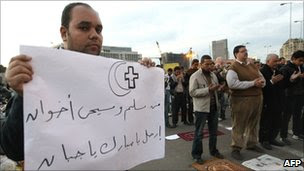 A Christian Copt holds a sign: "From Muslim and Christian brothers,
Leave Mubarak you coward"
Two days later, "Martyrs' Sunday" was celebrated by Egyptians of both religions as an affirmation of national unity in struggle.
....
I was told: "We are all in this together. Muslims and Christians." Other people were listening and nodding. "One hand, one hand," the crowd roared.

This time they were not talking about the people and the army, as they had a few days earlier, but about Egyptian unity. Muslims and Christians: One hand.
....
The sign of the crescent embracing the cross was everywhere: From the careful calligraphy of the handmade placards, to slogans picked out in stones on the floor. 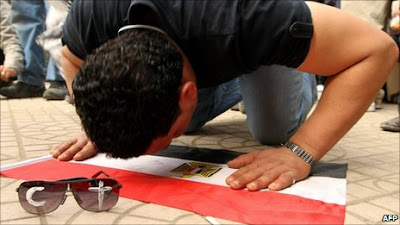 A man prays on his national flag with his 'crescent and cross' sunglasses nearby
I saw three elderly men, two Muslims clutching gilded copies of the Koran, arms flung around a third, hugging an ornate cross to his chest.

A group of young men and women belted out a song of the 1919 revolution, accompanied by a guitar. "Arise O Egypt, arise. Arise Egyptians: Muslims, Christians and Jews."
....
The symbol of the crescent embracing the cross was the banner of the 1919 revolution against British control of Egypt, and became the badge of the nationalist Wafd party which dominated Egyptian politics until the early 1950s.
....
It remains to be seen whether this unity forged in struggle will strike deep and lasting roots in Egyptian society, but Maha Abdelrahman is confident that the potential for change is real.

Anne Alexander is a Buckley Fellow at the Centre for Research in the Arts, Social Sciences and Humanities, University of Cambridge
BBC © MMXI The BBC is not responsible for the content of external sites.

You can find the full article on the BBC website here.

If they can embrace each other, then why can't the rest of us realise there are more important things to worry about (or die for) than the way you choose to pray to God?