...
Well... two months of blood tests and scans and the doctor still isn't sure what's up with my hands. Some fingers are numb and other fingers are over sensitive so that even the slightest touch is painful. Water feels like gritty sand, my favourite fluffy blanket feels like a door mat. Continued pressure, like holding a cup or clicking the mouse button, starts to build up tingling and electric "shocks" that turn into burning pain. It can feel like my hands are on fire.

You don't really realise how much you use your fingers until you can't use them. Typing has become... challenging. Any posts you read here nowadays were written in carefully measured segments of working a bit - resting a bit. Dressing, eating, brushing my teeth or holding a cup, turning a book page... I no longer take any of it for granted.

But this post is actually about an even more important touch that many of us take for granted - the touch of another hand.

You see, when I was sent for blood tests last month my doctor decided to check all diseases that might cause these symptoms. Since I had a blood transfusion in an African hospital prior to 1989 I'm considered at risk of having caught hepatitis or HIV. I was tested for both last month and I'm glad to say I'm fine on both counts, but the experience of those tests was eye-opening.

I've had at least seven sets of blood tests since this started and all of them were the same routine for the nurses - once they've taken the blood they hold some cotton wool over the area to stop the bleeding and then put a plaster over the spot. Most of them chat a lot as they work. I think they do that because some people are nervous around needles.

But on the day I went for the HIV testing it was quite different. She was chatty until she saw what test I was down for. She did say she'd never had to do an HIV test before and then she went quiet... and put on extra gloves. For the first time I felt scared having blood taken, because her nervous-tense silence made me feel weirdly alone and isolated.

After she took the needle out she hesitated... then handed me the cotton wool. I held it to the tiny spot of blood on my arm, wondering if I'd imagined her hesitation. Was I being paranoid? Was I just feeling weird because this was the only blood test that implied you'd done something "wrong" in order to contract the disease, even if we know now that many innocent people get HIV and AIDS?

So I figured maybe I was just being paranoid, until it was time to take away the blood-stained cotton and put on the plaster. She just froze - staring at my arm as if the cotton ball was a cobra. She looked so unhappy and guilty. I took it off myself, rolled it tight in a tissue I had in my pocket. Her smile of relief was HUGE. She took it quickly and threw it in the bin. Putting on the plaster was a similar scene - fear and acting as fast as possible with as little contact as possible.

I felt more alone than I ever have in any medical situation before, but it did get me thinking...

what is it like to have people not want to touch you
every single moment of every day?

We sometimes forget how important human touch is to human well-being.

I'm proud to say my mom knows better. In the early 1980s, when AIDS was the new terror in the news, we were in town shopping. We noticed the crowds all moving away from one area of the shopping mall - they were all avoiding a small table with two young men standing behind it. As we walked closer you could see the sign and pamphlets on the table. We recognised them then - it was two young men who had been on the news. They were on a charity cycling tour, to help raise money for AIDS awareness.

they both were infected.

They stood there in complete isolation. One was trying to smile - the other was clearly in a bad mood. Can't say I blame him when everyone was moving to the far wall to go past their area of the Mall. My mom made a bee-line to their table. I went with her. I watched the looks of shock on the young men's faces as she asked them if she could take a pamphlet and how to give a donation. It was nothing in comparison to the stunned expressions when she held out her hand. My mom shook both their hands before we left and so did I. As we walked away we turned to wave and I remember the BEAMING smiles of those two young men as they waved back.

It only took a few seconds of human touch to brighten their entire day. Just one hand in another.

a handshake
a pat on the arm
a hug... 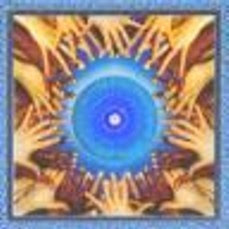