.....
This post is actually for TWO anniversaries, because I promised Amel a story and because this year is a very special 10th anniversary. So.. here's a photo of me ten years ago. Yep, that's me, sitting in front of a true dinosaur of a computer monitor. ;-) 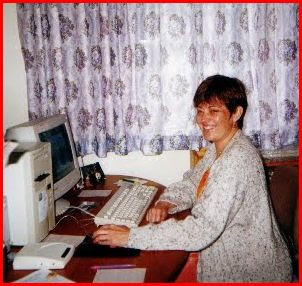 That computer is long gone, but I still have the purple and pink pen by my hand and the table that computer stands on. What was I doing when that photo was taken? I was chatting to a man on the other side of the world. :-D

I went out and got an internet connection in July 2001, because my new job (astrology advice piece in a weekly newspaper) called for me to have an email address. At first, for months, I was totally clueless on the internet. The only place I knew was Google, but I had no idea how to actually get anywhere using it.

After months of muddling along I finally managed to find my very first on line forum. Interesting thing that I know my blog friend, Shastri, will enjoy - I wandered onto my first forum via a poem about reincarnation. It was so nice, but no-one had replied to the poet so... I joined the site to post a reply on how much I liked it and ended up staying. I spent every evening on line talking, discussing and joking with all sorts of people all over the world. It was magical. I'd spent the last 20 years living in a seaside village where pretty much nothing happened year round. Now I could discuss current events and mutual interests with people from all over the world.

Now the funny thing is I made lots of friends there, friends I still have and some I've met in real life, but there was one member there I never spoke to - a man named Alexander. I saw him there, talking about pyramids, but the conversation was way beyond my knowledge of ancient history. I do remember thinking "that Alexander seems to be a history boffin," before I moved on. LOL

I was invited to join another site that was all about ancient history. I made friends there too, but never knew that this Alexander was friends with people there as well. So I hung about on two places where "Alexander" was and never met him. I was invited to join a third forum. It was a private one, not open to public viewing and meant to be about philosophy and science. I have zero knowledge on either, but was so flattered that the folk running the place had invited me that I said yes. (LOL)

It was a bit boring there so I didn't go there much. I only vaguely noticed when a new member joined, because he was amused at a joke I was sharing in. It was about ancient Egyptian art, of all things! It was the same Alexander I'd missed meeting on both other forums, welcomed on this third place by his nickname of "Sandy." We never actually spoke to each other and I stopped going to forums as it was near Christmas and I was too busy. Then, after all the holiday madness was over, I found myself sitting on New Year's Eve feeling restless and kind of yearning for... ? something I couldn't put into words.

New Year's Eve is a time when everything seems more intense - thoughts about the past, people you've lost along the way, where are you going in the new year, etc. I went on line and decided to write about my feelings and personal life experiences. I picked that third forum for no other reason than it was private, members only. At least there I'd only face being read by a handful of people. So I wrote out this 'confession' of sorts and posted it just before midnight. I shut down my computer, wished my family and friends happy new year and went to bed.

Writing all that personal stuff! I dashed online, hoping I could delete my crazy impulse post before anyone read it. I was so relieved to see no-one had answered it and I was going to delete it, when I noticed there was another new message no-one had replied to, a post by the new guy... "Sandy."

And there I made a decision that probably changed my life. Instead of deleting my message... I first went and read this other new year post... and I read a man on the other side of the world who had decided to fling caution out the window and expose his soul online. He'd posted his story just a few moments after mine, minutes after midnight in the new year. I read his post... and found a story there that matched mine. He'd ended by apologising for using the forum for something so personal as a life story "confession" and joked that no-one would answer.

I told him that it might sound crazy, but his life stories were like mine. I told him to go read my post and I ended with these words (thankfully I saved them):

"as for the similarities between our stories. I have a friend who firmly believes THERE ARE NO COINCIDENCES! We've argued this in the past,but now I bow in submission. When I read your story my first thought was,"I know you." So, looking forward to getting to know you again, Sandy. There are 364 days left in this year. Let's see where they take us."