Dona Nobis Pacem 2012, A Flicker of That Greater Flame

Dona Nobis Pacem... all kinds of songs sing about “Peace on Earth”, but is it really possible? Are humans actually capable of finding other ways to live and prosper that doesn’t include violent harmful conflict? Well, this year I caught a glimpse of what Peace on Earth could be like and it was wonderful. I saw it when I was watching the Olympic and Paralympics Games of London 2012. 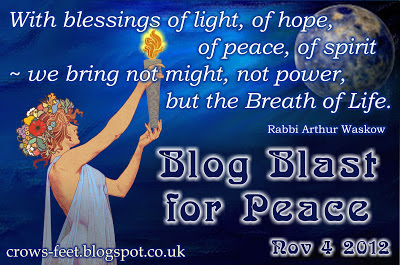 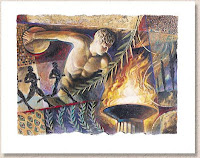 Both sets of Games were inspiring and uplifting, but the Paralympics were my absolute favourite. From start to finish they stood out as a bright light shining on all that is best about being human – courage, persistence, tolerance, humour… and that greatest gift of all - our human spirit. Here were people running without legs, swimming without arms, playing team sports without sight, breaking records and shattering preconceptions.

And what better example for a peace post than the Paralympics?

In 1948 a doctor, Sir Ludwig Guttmann, organised the first wheelchair games to take place at Stoke Mandeville Hospital in Buckinghamshire. He wanted them to take place at the same time as the London 1948 Olympics… alongside, hence the name para-lympics. He had been working with injured war veterans and believed that encouraging them to be more active would help in their recovery. He was right – it did and it still does. Right now in 2012 the Paralympics is still helping war wounded young people back into living a full life through sport. People like…

US Navy vet, Brad Snyder, who won gold and silver just barely a year after he lost his sight after stepping on an explosive device laid in Kandaha.

Mohamed Kamara, competing for Sierra Leone, who had his arm cut off by rebel fighters (during their 11 year civil war) when he was 4 years old.

Captain Luke Sinnott, who lost both legs and an arm in an IED bomb blast while serving in Afghanistan in 2010. He was so inspired by being a part of the closing ceremony (he climbed the giant flag pole) that he now intends taking part in the Rio Paralympics of 2016, with the help of organizations such as Help for Heroes.

My most favourite Peace inspiration story comes from the Rwandan volleyball team:

Dominique Bizimana and Jean Rukondo make unlikely teammates. Eighteen years ago they were on opposite sides of a brutal sectarian conflict that spawned the worst mass slaughter since the Second World War.

Rukondo, an ethnic Hutu, was stationed on the other side of the front line as a soldier in Rwanda’s national army. While leading a patrol he stepped on a landmine losing his entire left leg.

Now they fight together as members of Rwanda’s Paralympic volleyball team. “We always joke when we are playing with young kids that I think that man who shot me was Rukundo,” says Bizimana, an infectiously enthusiastic 36-year-old from Rwanda’s Tutsi ethnic grouping whose lower left leg was torn off while fighting for the rebel Rwandan Patriotic Front (RPF). “Now we are friends and we train together. Our team is always together. It’s a good example for young people in Rwanda. Our team is a model for other generations.”

If they can do it, why can’t the rest of us?

In the fantastic Paralympics closing ceremony, the speech was given by *Rory Mackenzie, a South African who was serving as a medic with the British Army in Iraq when he was blown up and lost his right leg. He said this:

"Tonight we bring you the Festival of the Flame, the symbol of the spirit of the Games, which has burned bright at London 2012. Tonight we celebrate that spirit, and although we have many differences, there is one quality we all share, one thing all of us have in common: human spirit."

(*Rory is another success story from Help for Heroes)

Yes, we have many differences, but the Games proved that we can overcome those differences, any obstacle or so-called “disability”, when we truly work together. When we focus on what makes us the same and use it to encourage and light the way for others… we are unstoppable and invincible.

The flame of the human spirit burns brightest when we share it with others.

Physicist and author Stephen Hawking made the opening speech at the Paralympics. The whole speech was brilliant and if you never heard it – go now and read it here! There’s one portion in particular I want to add to my post today. He said:

“The Paralympic Games is about transforming our perception of the world.  We are all different, there is no such thing as a standard or run-of-the-mill human being, but we share the same human spirit.  What is important is that we have the ability to create. This creativity can take many forms, from physical achievement to theoretical physics.  However difficult life may seem, there is always something you can do and succeed at.”

"However difficult life may seem, there is always something you can do and succeed at."

Beautiful words and how true they are, but there is one vital lesson from the Paralympics that we need to remember - all those athletes, even Stephen Hawkin himself, would not have been able to reach their full potential without the help of others. We all need help at some time or other, just as we are all capable of offering help in one way or another. With our creativity, that unquenchable fire of our combined human spirit, we can change perceptions and when we do... we change the world.

I'm finishing my post with an example of that human creativity - a lovely video of Olympics  photos set to John Lennon's song "IMAGINE", sung by singer/musician, Billy Lemon.