With all my computer woes I have been unable to access or share the last pictures from our trip to the Highland Wildlife Park in August. Well... today I finally managed to get back into that photo folder! So here are my final and most favourite animals - the tiny tigers and fluff cats. ;-)

The park has a lovely idea for their cats - they have an aerial walkway that runs through the woodland section, above the cages and footpath. It links several cages together so that the cats can prowl on high, chill in solitude or visit each other.  Here's one standing in the walkway, just to the left of one of the cat cages. Can you see it? 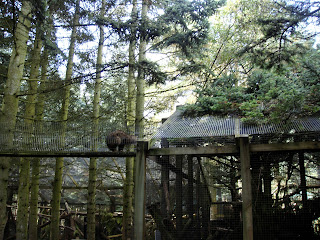 I went closer and took some more photos... 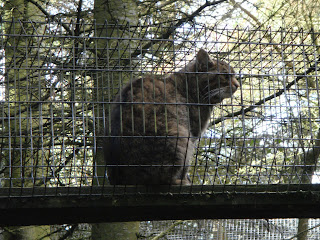 The Scottish wildcat looks similar to a domestic tabby, but their heads are more round and their tails are very bushy, with a distinct black tip. 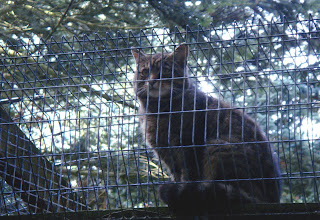 This one completely ignored all of us below gawping upwards.

Sadly, these lovely cats are now one of Britain's rarest mammals, quite possibly in serious danger of extinction. Part of the problem is cross-breeding of domestic cats with wildcats. There is a very famous example of a melanistic hybrid, the "Kellas cat", in  *Elgin Museum. (*Scotland's oldest independent museum)


For more information on the Scottish Wildcat and the important work being carried out to save and protect them, by the Royal Zoological Society of Scotland, please go to Cairngorm Wildcat Project.

We saw kittens and adults at the park, but they were up in the trees grooming each other and not very interested in being photographed.

I did manage to get a few quick photos of one adult as it walked across the cage. This was with a zoom shot, so it is a bit blurry, but you can see that gorgeous black-tipped tail. 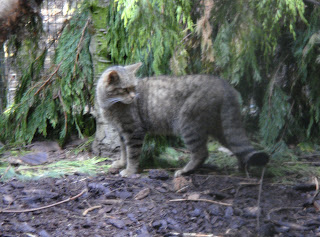 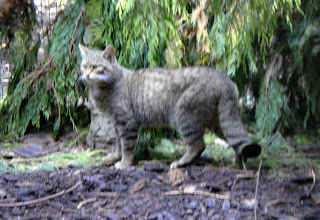 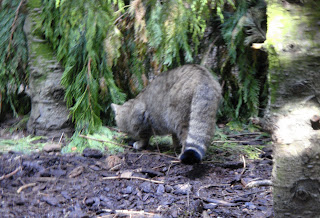 Now on to the fluff cats! We nearly missed them and the only photo I managed was so blurry it wasn't worth sharing. So I'm using a video from the Highland Park to show off these stunning cats. This is a pair of Pallas cats:

"The Pallas cat was named after the German naturalist Peter Pallas, who discovered them in the 18th Century. They are found in Iran, China, Russia, Mongolia and Tibet, living in rocky deserts and barren mountainous regions.

Pallas cats are most frequently encountered at dusk or in early morning. They make their den in small caves and rock crevices but will take shelter in the burrows of marmots, foxes and badgers. They will sleep here during the day until dusk, when it is time to hunt. Pallas cats have dense fur to cope with their cold, dry environment, and they wrap their tail around their body for extra warmth when sitting or lying."