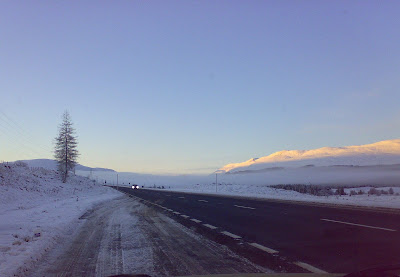 Last Sunday, 30 November, was St Andrew's Day and Historic Scotland was offering free entry to lots of historic sites. We decided to do some exploring South, since both Stirling Castle and Edinburgh were on the list for free entry that day. We got up before dawn (not as early as that sounds, since it rises around 8 am) and were off down the road. It was very frosty and we learnt later that the average tempterature was between -3 and -12 Celsius.
This photo is of Blair Athol castle, on our way South. 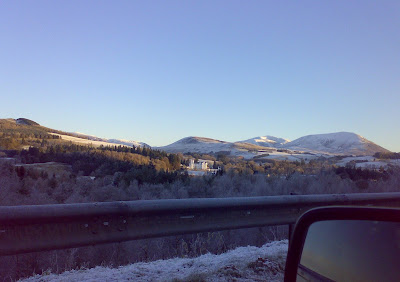 Frosty fields. They sparkled like pale jade in the sun. :-) 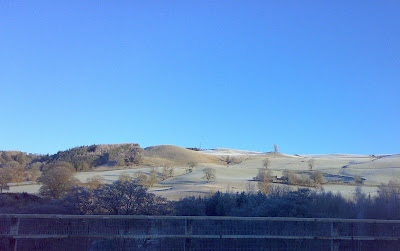 Mist in the valley and sun on the mountaintops. 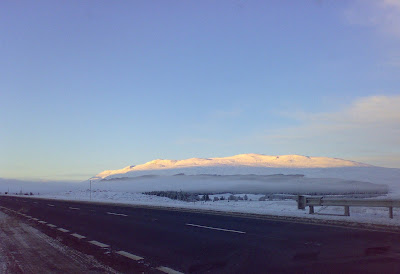 When we arrived in Stirling it was so cold that the moisture in the atmosphere was lying as a heavy freezing mist and everything was covered in frost. 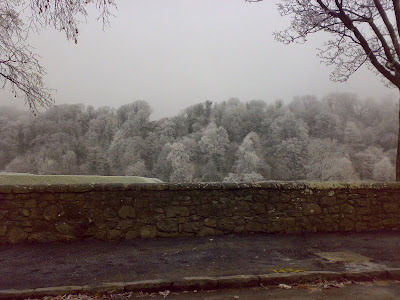 Waiting at traffic works I got this nice view of the mist. 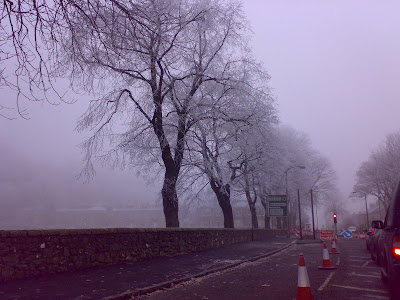 At the castle there was a poor frozen piper playing at the entrance to welcome visitors. He must have been freezing! 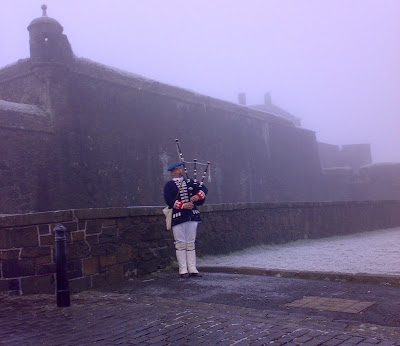 Once inside the entrance there were people dressed as characters from the castle's historic past scattered around, like these two 'soldiers'. 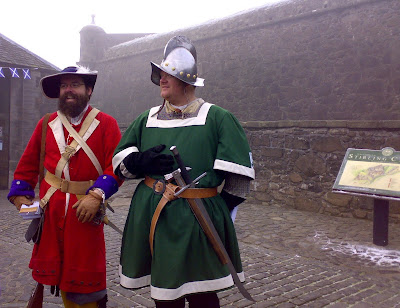 It was so cold the spiderwebs on windows and walls were frozen solid. 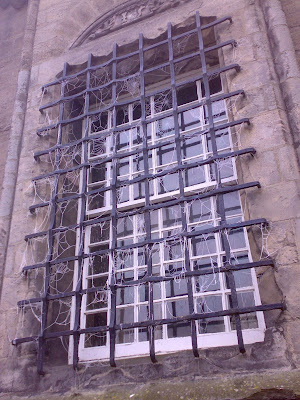 Inside the Great hall. It was the biggest hall in medieval Scotland. It has four huge fireplaces, walls covered in tapestries to keep in the warmth and this amazing vaulted wooden ceiling. We took a photo of a knight taking a warm-up break inside. You can see the entrance doors to the great hall, and one of the fireplaces along the tapestry-covered wall, behind him. 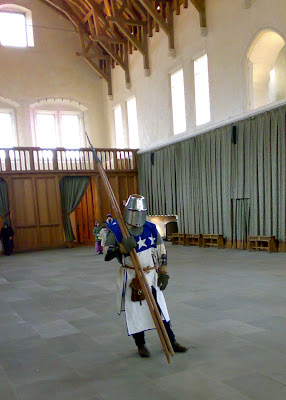 The ceiling of the great hall. 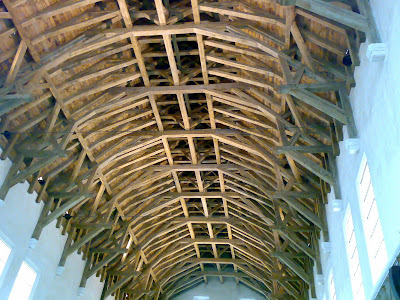 Outside there were gargoyles everywhere. Some your standard weird beasts, but a lot were human. This one of a woman was badly eroded, but I was fascinated at the creature around her neck. It looks like an iguana! 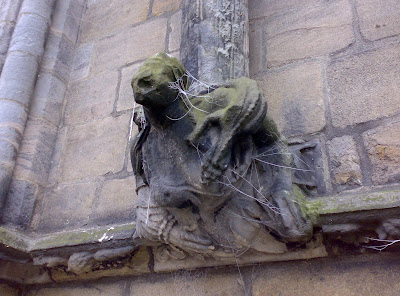 Lots of gargoyles framed every window. 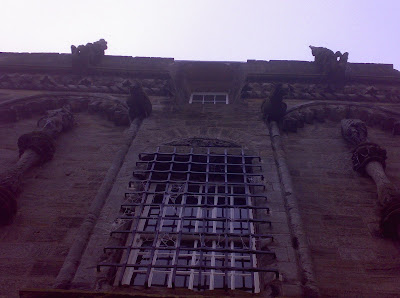 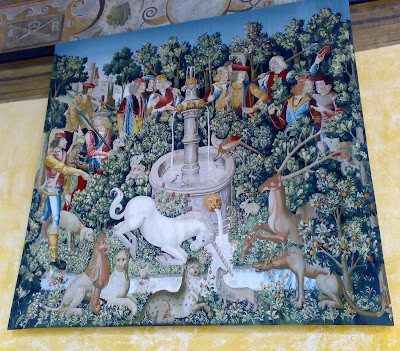 By this stage we were all feeling frozen and decided to dash back to the car, so we missed seeing the great kitchens, which were a long walk around the castle on frozen icy cobbles - no thank you!!
Out in the parking lot this was the view of the gardens and cemetary below the castle. 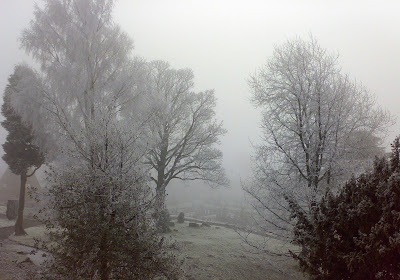 We did go on to Edinburgh, but the place was just mad. Traffic jams everywhere because there were so many special events on for St Andrew's Day. We couldn't get near the castle and eventually gave up and drove home. I took this photo on the way home. It was 4:00 pm and we'd stopped at a garage for fuel. 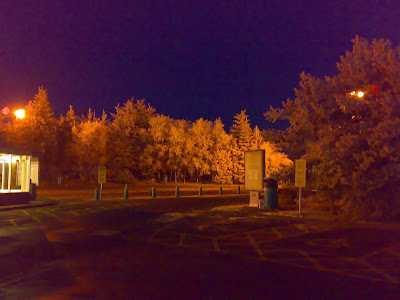 We had a great time, but we all agree that next time we'll try to see only one castle in a day... and in summer!
Posted by Michelle at 08:44

Wonderful photos, Michelle! I really enjoyed seeing those. I felt sorry for that poor piper. Looked like he didn't even have gloves on. BRRR! Your photos made me shiver. HA HA!
The tapestries and gargoyles are really cool. I really enjoy seeing your posts like this because I doubt that I'll ever get to travel to such places myself to see them in person. Thanks for sharing these.

HA HA HA HA HA...I'm laughing at your last sentence hi hi hi...but remembering how HUGE the castles are, it must be collldddd indeed! BRRRRRRRRRRR...

LOVE the pics, especially the first three he he he he...

I LOVE snow since it sparkles like diamonds under the light...mmm...

those are beautiful pictures! Does it usually snow this early in December??

Hmmm ... I'm not quite sure what happened to my first comment, so I'm trying again.

What a marvelous (if chilly) excursion! I appreciate you sharing it with us so that we could enjoy it vicariously.
Hugs and blessings,

In my life I've never seen such weather. Fog is rare here, snow is rare too, frozen fog is unheard of and I have never seen a frozen spider web. Fantastic! I love seeing it, I'm glad I don't have to feel it though. My favorite photo is "the view of the gardens and cemetary below the castle."

Daisy
That's exactly why I thought I'd post them. When I lived in Africa I'd so wish that I could see places like this and internet sites give you the same old views over and over - I love the little details. I promise to take lots of photos next time we go anywhere interesting. :-)

Amel
My two biggest surprises on moving North was finding out that snow sparkles and the glow you get off snow at night. It's so BRIGHT. I LOVE snow and frost, but my toes and fingers hate the cold. ;-)

Vince
My husband says it used to snow this early when he was a kid, but the last decade has been very mild with snow usually only in January. We've had two white Christmases, three cold and rainy. This year it snowed in October (first time since about 1930!) so they think we'll have a cold white winter this year.

Hi Storyteller
I hate it when these places "eat" your comments. It always seems to happen to me when I write something long and complex. There's an imp in my computer, I think. ;-)
Glad you enjoyed the photos.

Genie
I was born and spent my childhood in a semi-desert area. It took me years to get used to green grass and now I'm just constantly bowled over by snow, ice and frost. The cold can be painful (frostbitten toes are NOT funny!), but the beauty makes up for it. I just wanted to photograph everything, but a lot of the magic just is so hard to catch. Like grass heads turned to crystal by the frost. Every blade and tiny fragment sparkling... just gorgeous!

Oh, I'm reposting the spiderwebs up closer for you. :-) they are white with ice crystals.

Fantastic photos and it seems a fantastic place to visit! I can "feel" the cold too by looking at them. (It was about 32 Celsius here today - just for contrast :-))