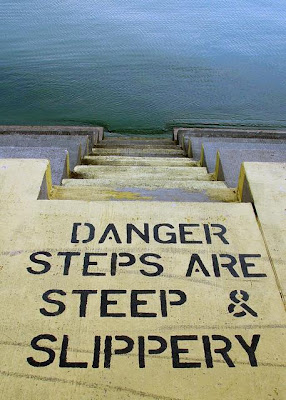 Something Betty said in one of her replies reminded me of the novel that died with the first sentence. It reminds me of why I'm here blogging as well - because writing is how I breath. It was always about words for me. You can ask my parents. I devoured books when I was young. At school they couldn't keep up with me and it wasn't long before the love of reading words became the love of writing them. Even when I drew pictures they were always illustrations to the stories in my head.

I started my first 'book' when I was about eight. It was to be a dramatic gripping tale of a mermaid, but I never got beyond figuring out what she'd look like. The next one went further - it was a short illustrated booklet on furry purple teddy-bearish things from another planet. I know I named this new species, but I can't remember it now. :-\

One way or another I never stopped writing: poems, short stories, letters... I even wrote an entire project on Julius Caesar one holiday - just for fun! I was a weird kid. I wrote that project purely for myself, no-one ever read it. In fact, most of my writing was unread... until I hit high school.

In high school I started writing adventure story-romances. Very lurid dramatic tales that would be written in bursts, usually during the most boring classes. It was a stop-start affair as every two pages I'd have to pass the book down the row of desks so my friends could read the next thrilling installment. They were fun, especially the spy thriller where no-one in class could guess who the "bad guy" was till the last chapter, but they tended to wobble all over the place due to the fact I wrote them with heavy influence from my 'fans' who often dictated exactly what kind of hero they wanted their heroine to fall for, etc.

By my last year in High school I felt ready to write something with more substance. I plotted out a fantasy story, (I was deeply in love with Lord of the Rings at the time). Eventually I felt ready to start. I wrote my opening sentence, plus a few paragraphs. My closest friend asked if she could have a first peek. I handed over my new baby and she read... and started to giggle. She read again... then collapse on the desk giggling hysterically.

I took back my book and read the opening sentence, where the young prince escapes from the castle to start his Great Adventure. I'd written:

"He slipped out the room and went silently down the passage."
I'm giggling as I type that. I did not find it at all funny at the time, but now I can also appreciate the wonderful and completely unintended image of my beloved prince scooting down a shiny palace passage on his ermine and velvet butt! I never wrote another word all that year. Never mind writer's block - I had 'butt block'! Every time I picked up my great novel I'd see my poor prince slip-sliding away... and all the noble brave adventures I'd had planned for him would be lost to that utterly un-noble image.
I'm glad to say I've come a long way since that dreadful day when my novel died and my prince... slipped away. I was not at all able to laugh at myself when I was young, being a very serious-minded child and teen. I am relieved to say I have learnt to lighten up as I've grown up. AdmittedlyI don't think Leos ever really enjoy falling on their butts to a laughing audience, either in words or reality, but at least I have learnt not to fret over my lost dignity anymore.

My poor prince lost his dignity and lost his chance to live. He never made it past that passage stumble. I'm happy to say that he did not die in vain. His sacrifice taught me the importance of several things:

1. One person's dramatic speech/deep thought can be an other's funniest moment,
2. The first words of a story are vitally important,
3. Never take yourself too seriously as it completely kills creativity,

Life's lessons it is, then? You are not alone in your word frenzy--I don't know if I've mentioned this, but I had a very boring job once, and it gave me plenty of free time in which I read parts of the dictionary. But now I know a bunch of 'p' and 's' words!

#5. Don't show people your stuff until you've fleshed it out a bit otherwise you've set yourself up for criticism before what you've written is ready for it.

Your high school writing reminds me of mine. I wrote like that a lot in high school, passing chapters between classes and writing in moments between my friends and their favorite celebrities--who were usually the heroes of my novel. Each of my friends had a specific member of Duran Duran that was THEIR hero and lover in the book. I should say, "book" because it was SO awful!

Perhaps I should enroll in a few classes at the junior college that I hate (algebra or history), it might inspire me to start writing again. I was much more motivated to write when I was stuck in a boring classroom.

Derik
I love dictionaries. :-) My dad had this huge old Websters one (with tiny ink sketches here and there) that I'd sit and page through as a kid.

Genie (and Derik)
It's true - boring jobs/classes really seem to energise the creativity. I find it frustrating that I can't write in a vaccuum ofcomplete peace and silence, yet being with my family is distracting too. I write best in impersonal boring busy places.

which reminds me... the first Harry Potter book was written in a tea shop/cafe if I remember correctly. So we're not alone. ;-)

Genie
LOL Your friends sound like mine. I can remember bitter arguments once when two friends wanted hero A to get the girl when I'd been planning on guy B. :-D

I can't say it enough he he he...anyway, as you know I was always serious, as well, and only after moving to Finland did I learn to laugh at myself. Before that, I would curse myself for days on end for the mistakes I made (or at least a whole day) he he he he...

P.S. What I also learnt is also this: that the friends or people that laughed at our silly mistakes may not even remember anymore what it was about, even though I still remember it clearly as if it happened yesterday. :-))))

Amel
It's a big adventure moving countries - it's like you get to see yourself through a new foreign mirror. I think you've done amazingly well and I agree completely with what you said. Oh gosh, I still take myself too seriously at times, but at least I do realise fairly quickly nowadays and can take action to lighten up. ;-)

Michelle, you sound a great deal the way I was when young. I was then, and still am now, always either reading something or writing something. The last part of your post offers very good advice. I especially have learned for myself how important it is to not take myself too seriously and to remember to keep my sense of humor about me.

HE HE HE HE...it's not easy NOT to take ourselves so seriously since we'd been doing it for...decades, eh? I also find that I have to REALLY control my thoughts sometimes so that they don't "run away" to being obsessive about something, especially when it comes to making mistakes he he he...

Moving to Finland has really been a HUGE adventure for me...the biggest risk I've ever taken in my entire life...and THANK YOU for saying that you think I've done very well. It's hard to gauge from where I stand and I value your opinion. :-)))) Nice to get encouragement about how far I've gone. :-))))

Amel
Oh gosh yes, you've done amazingly well. I was so 'wobbly' my first two years here. I felt utterly lost and it was only my online friends and online connection to old friends/family, that kept me sane. You should go make a BIG gold star and stick it on your mirror with the words "Winner of surviving first year in a new land/culture" written on it. ;-)