...
An interesting new Blog called Cloister Voices issued a rather unique challenge. You can read the long version on their blog. Here's the short version:

"Meme Challenge: Describe your first encounter with a hermit, mystic, or an unusually eccentric person." 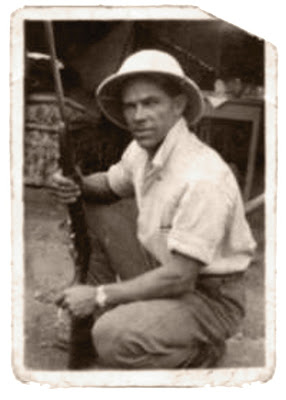 My very first encounter with an eccentric has to be my dad’s father. He was someone I only knew literally between the ages of birth and four, but who came to me a thousand times through my life in the hearts and words of the people whose lives he had changed. He was there, one way or another, my entire childhood. He influenced everything from my sense of humour to my opinions on religion, but how do you describe a man who was so charismatic and yet so elusive? My grandfather was born as the middle child of a large family in the British African colony of Southern Rhodesia. When he died, at a far too early age, so many people came to his funeral that they had to put chairs outside the windows and doors. Named Gabriel after an angel, yet never angelic, he was a walking oxymoron – an extrovert who loved being alone. He was a born performer, the charmer and the clown who stood out at every gathering and yet he almost never spoke about himself. He loved to be with people and yet he would sometimes just pick up his gun and gear and vanish into the bush for a week or a day. He knew the land intimately, as only a lover can, and the people of the land loved him in return. He knew every edible and poisonous plant and he knew every stone… quite literally. Geology was one of his passions and he had barrels of agates, amethyst, malachite and tigers eye that he’d collected on his wanderings. He worked as a dowser finding not only water, but minerals and even gold. After he died the barrels came to us and as a child I’d sit in the sand and play with chunks of malachite and agate, pyrites and mica. If I had to sum him up in one word I’d have to steal it from another culture and another continent. My grandfather was a Heyoka, the Lakota word for a Sacred Clown. I first came upon that idea several years back and the moment I read about it I knew I’d found my grandfather’s true spiritual calling...

Heyoka are thought of as being backwards-forwards, upside-down, or contrary in nature. This spirit is often manifest by doing things backwards or unconventionally.

Their satire presents important questions by fooling around. They ask difficult questions, and say things others are too afraid to say. By reading between the lines, the audience is able to think about things not usually thought about, or to look at things in a different way.

Principally, the Heyoka functions both as a mirror and a teacher, using extreme behaviors to mirror others, thereby forcing them to examine their own doubts, fears, hatreds, and weaknesses.

In addition, sacred clowns serve an important role in shaping tribal codes. Heyokas don’t seem to care about taboos, rules, regulations, social norms, or boundaries. Paradoxically, however, it is by violating these norms and taboos that they help to define the accepted boundaries, rules, and societal guidelines for ethical and moral behavior. This is because they are the only ones who can ask "Why?" about sensitive topics... Their role is to penetrate deception, turn over rocks, and create a deeper awareness.

Just like the Heyoka, my grandfather poked silly sticks at every “sacred cow” and did everything backwards-forwards. As the entertainer he did vaudeville type shows for the miners and nearly got lynched one time when the miners realised that the “girl” doing a striptease behind a curtain was actually my grandfather wearing false wooden breasts he’d made himself for his act. He played over a dozen different musical instruments, sometimes creating his own “orchestra” recordings by using two reel-to-reel tape recorders to tape himself playing over himself playing. Perfectly able to create beautiful music from a whole range of perfectly normal musical instruments the one he is most remembered for is playing the saw as beautifully as a violin.

How he dressed with complete disregard to fashion in whatever he liked, which included going to town in his favourite pith helmet on Saturday mornings. He never went to any church, yet helped out at all of them.. he also laughed at all of them. He laughed at everything he thought ridiculous or pretentious, nothing was too sacred to be found silly, and yet he rarely angered or hurt anyone’s feelings with his laughter. His comic version of the Catholic Latin Mass has been known to leave good Catholics giggling hysterically. I think it’s because he laughed from love and a pure joy in the silliness of humankind. He was a terrible mangler of song lyrics, making up his own wickedly funny or just plane giggle-silly versions of everything from everyday tunes and classical works to opera and hymns. I grew up singing his versions, always naughty, sometimes rude, but never to the point of offensive or insulting.

I have no conscious memories of him, but he’s there in the sparkle in people’s eyes when they speak of him. Through him, and through his son, I grew up with an abiding sense of silliness and a complete disrespect for anything/anyone pompous. To this day, over forty years after his death, I still sing his song lyrics (as well as make up my own for new songs), I tend to dress with an equal disregard for fashion, and I have an obsession with stones that I think he would have approved of…

and he managed to have the last laugh on us all.

Six years ago my husband came out to to marry me. One morning, a few weeks before we left to return to , he came through singing. This might not seem very remarkable, except hubby isn’t a sing-out-loud type. He prefers an audience of one, not a kitchen full of people making breakfast. My dad turned to him in absolute amazement and asked, “Why are you singing that song?” Hubby shrugged and admitted he had no idea. He didn’t even know the name of the song he’d been singing, but my dad did. It was one of my grandfather’s favourites - an old song called “Home on the Range.” My dad shook his head in wonder, “Do you know what today is?” he asked us. I didn’t know, only my mom remembered. It was the date of my grandfather’s death.

Only a Sacred Clown could have pulled off a joke like that from the other side. ;-)

What a wonderful story. How fortunate you are to have such a heritage. I imagine he watches over you and yours with tender care.

What a delightful story from your family. The photo is also wonderful. You can see the Sacred Clown shining playfully through his eyes. I've posted it on Cloister Voices. Thanks for a great story. The best part is discovering another writer who writes both poignantly and with her own Sacred Clown smile.

I've always loved your stories, especially about your family members. This one leaves me with a smile on my face and peace in my heart. :-))))

i think i like your grandfather..... you carry him well in your heart.

These are the kind of personalities that make the world an interesting place, otherwise it would be so predictable & boring. My father in law happens to be one such character & he is a engineering college professor :)

Very well written and so interesting to read!

Pardes
What a lovely compliment. Thank you. I really enjoyed this meme challenge a lot, both taking part and reading the other unique stories others have posted.

Amel
What more could a writer ask for than a reply like yours? :-))

Hi Ghost Dansing
I try to. He's worth carrying.

Vasant
Very true how it's these types of people who make life interesting and worthwhile.

These stories are incredibly moving, and intriguing. My theater company, Lynx Ensemble Theater is actually beginning development of a new piece about the Heyokah. Here's a video proposal for our project.

Hopefully we'll be able to consult you as a resource.

Thank you. :-) I'd be delighted to participate or help in any way. I haven't looked at your link yet. The internet it running slow at the moment and YouTube keeps hanging.

I have some links I'd like to send you, but this isn't the easiest place to hold a conversation. I'll add myself on YouTube. I'm Crowzena there (A bored Sunday name choice!).