Shastri sent me a very interesting link to a video of a ghostly siting. Go have a watch of the guys in the lift. VERY creepy! Having seen so many excellent fakes on YouTube I'm undecided whether this video is the real thing or not, but it did jog my memory about our strange experience earlier this week when my parents and I went shopping.

My mom wanted to buy a new bath mat, so we stopped in at a big DIY/furniture store that sells everything imaginable. While my mom and dad debated the various styles of bath mat I wandered off to look around. I found this photo online of the bath section, I was actually around the corner, but it gives you an idea of the shop. :-) 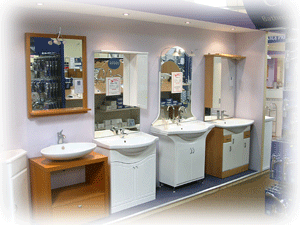 I stopped first to look at their shower curtains, because the colours were so pretty. They had the plastic bags holding them hanging up on a wall in a wave of colours from pastels through bright to patterned. I glanced behind me, to admire some very fancy bathroom mirrors on the other wall, when a noise and movement made me turn back.

As I watched one of the hanging packets opened by itself and the shower curtain inside slowly slid out. It's hard to explain why that was odd. You could easily argue that the packet was loose and gravity makes things fall, but the way the plastic flap opened out and the curtain came out was too slow. Almost as if an invisible person had opened it and pulled the curtain out. I thought, "Weird!" I walked off and quickly forgot about it - there were too many interesting things to look at.

Later, back at the car, my dad said, "Do you know that place is haunted? We saw it."
I said, "Wow, you saw the curtain too?"
They both looked puzzled and replied, "No, we saw the box... what did you see?"

It turned out that while I was lost between rows of lamps on sale and kitchen goodies my mom and dad had their own weird experience. They were being served when a man who worked in the shop came past. He put a box down on a shelf, then came over to them for a chat (people are very friendly here, everyone stops for a chat). While they were talking the big box he'd put on the shelf suddenly started to move. As all four of them (woman behind the counter) watched the box slowly slid off the shelf and fell BANG on the floor.

The man and woman both laughed. They said it happened a lot as the place was haunted. Things fall off perfectly shelves, things drop, etc. The shop is about forty years old, but before then it was a Mill/factory where lots of people worked. I have no idea how old, I tried looking on Google, but couldn't find anything, but in the shop there are old black and white photos from the days when the place was still a Woollen Mill.

What's really funny is how we both saw something odd, but completely independant of each other. I know next time I'm shopping there I'm definitely going to watch more closely! ;-)
Posted by Michelle at 14:29